Marvel’s 'What If…?', an 'Jakob’s Wife' are some of the best new movies you can stream right now

For those who like a little more sex and violence with their entertainment, check out the Danish thriller Victim of Love and Megan Fox’s Till Death

Marvel Studios
That's Captain Carter, as in Peggy Carter, co-founder of S.H.I.E.L.D., taking Steve Rogers' place in the fantastic "What If...?"

When I was a kid and an avid daily comic book connoisseur, one of my favorite Marvel Comics’ titles was “What If,” which took classic Marvel origin stories and team-ups and reimagined them with different players and circumstances. For example, the very first issue, published in 1977, was titled, “What if Spider-Man had joined the Fantastic Four?”

The resulting stories and endless possibilities equated to my adolescent mind being blown.

For its fourth stand-alone series on the Disney+ streaming platform, Marvel has resurrected my childhood love as a half-hour animated series that still holds significant mind-blowing mastery.

The first two episodes of the planned nine-episode first season deliver solid animation along with potent storylines, namely asking the questions “What If…Captain Carter Were the First Avenger?” and “What If…T’Challa Became a Star-Lord?”

As comics readers know, the MCU has never been shy about giving other characters the chance to step up and replace a beloved hero, as evidenced by “The Falcon and the Winter Soldier” series, which introduced Anthony Mackie’s Falcon as the next Captain America.

“What If…” takes it a step further by imagining a world whereby Peggy Carter was the one who first received the Super Soldier serum instead of Steve Rogers at the height of World War II.

Even better is the second episode, which wonders about the impact to the Guardians of the Galaxy if T’Challa accidentally had been kidnapped by the Ravagers instead of Peter Quill. Yes, it’s poignant and bittersweet to hear the late Chadwick Boseman’s voice for the final time as T’Challa, but this episode also delivers on the promise of past visits to The Collector’s museum with an extended appearance by none other than Howard the Duck.

It’s a little-known fact that most horror anthologies are only as good as their wrap-around stories.

For the uninitiated, the wrap-around story is the foundation from which an anthology launches to life, and it often provides a through line to carry the overall narrative. For example, in “Trick ‘r Treat,” arguably one of the best anthology films ever made, the wrap-around story focused on Sam, the pumpkin-headed, pint-sized demon charged with making sure Halloween’s hallowed rules are strictly followed.

“Dark Stories,” a new anthology hailing from France, understands better than most that a solid wrap-around story can help offset when any of the short films fail to stick their landing. Here, the masterful and surprising wrap-around involves a mother, Christine (Kristanna Loken), who has ordered a ridiculously creepy life-sized doll for her son. When Christine unwraps the doll, it springs to life, having been created in a lab and pumped full of human blood. The doll threatens to kill Christine and her son, but she distracts it by telling the doll a series of scary stories.

And boy howdy, three of the stories she spins are among some of the best shorts ever to be featured in a horror anthology. The third story about a hitman who returns as a zombie hellbent on revenge and to save his wife and daughter could have been a standout feature film in its own right. This short has stellar practical effects and a great twist at the end. The fifth story too is a standout. It focuses on a man who believes himself to be a new messiah after being abducted by aliens who tell him that the people he can convince of a coming alien invasion will be the only ones to survive. 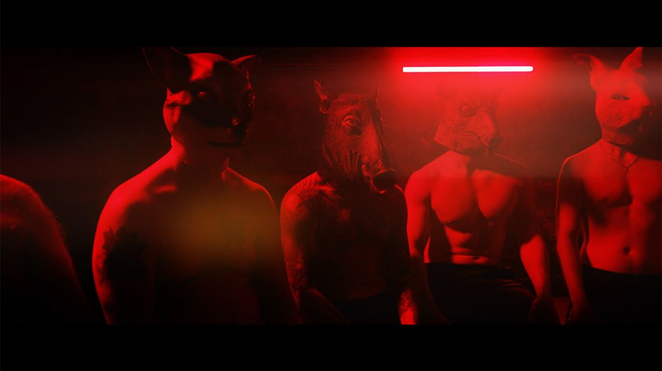 Indican Pictures
For some, this sex dungeon masquerade might just look like heaven, but in "Victim of Love," the consequences are decidedly hellish.

The Danish import, “Victim of Love,” is a batshit bonkers descent into madness that follows a decidedly unstable guy named Charly (Rudi Køhnke) who fancies himself a private investigator who returns to Copenhagen to search for his missing girlfriend, Amy (Louise Cho).

As written and directed by Jesper Isaksen, helming his first feature, “Victim of Love” offers a kaleidoscope of visceral imagery, both ghoulish and hyper-sexualized. As Charly drinks and fucks his way across the city, it becomes evident that his quest to find Amy may be more about his own inability to come to grips with why she’s disappeared in the first place. The central mystery is still secondary to the increasingly fetishized exploits that Charly gets into, which is in no way a complaint.

It has been a long time since Megan Fox starred in a movie worth mentioning, and for anyone keeping score at home, that movie was 2009’s fantastic “Jennifer’s Body,” but with “Till Death,” she’s finally back top-lining a genre thriller that plays to her strengths as an actor.

“Till Death” isn’t going to win any awards for originality, but thankfully it moves quickly past its most derivative moments (I’m betting either director S.K. Dale or writer Jason Carvey must have loved Stephen King’s book, ‘Gerald’s Game’) and plants a flag firmly in the survival thriller genre, allowing Fox to (ahem) try and out-fox a pair of would-be assassins hired to kill her.

If it was up to me, and you’re likely thankful that it’s not, I would ensure that all foreign imports were released in the U.S. by their original titles, which means that the new road-rage thriller from the Netherlands, now titled “Tailgate,” would be available for you to watch as “Bumperkleef,” which is just a fun word to let trip off your tongue.

“Tailgate” is basically “Unhinged” if Russell Crowe had been a frothing mad exterminator with a lethal tank of poison on his back.

My problem with the film though is that the protagonist, quick-to-anger father and husband Hans (Jeroen Spitzenberger), is so unlikeable and such a dick driver that it’s nearly impossible to feel bad when he draws the ire of Ed (Willem de Wolf), a sociopath who barely needs an excuse to pull his truck over, strap on his tank and start gassing anyone within reach. It was bound to happen, but writer-director Taylor Sheridan’s streak of hard-edged thrillers, including “Sicario,” “Wind River” and the modern-day classic “Hell or High Water,” comes to an end with “Those Who Wish Me Dead,” a ridiculous survival thriller that tricks viewers into thinking its about smoke jumpers battling a forest fire.

Sadly, the true casualty here is Angelina Jolie, whose return to pulpy action flicks is completely derailed by Sheridan’s erratic and unfocused script.

James Liddell/Terror Films
As a second helping of horror, the new anthology "10/31 Part II" pales in comparison to its original.

I was among those who championed 2017’s little-known independent horror anthology, “10/31,” which delivered some surprisingly solid short films.

And I was super stoked when I learned a sequel was imminent.

Sadly, “10/31 Part II” is nowhere near as good as its predecessor in large part because this time the flaws are impossible to overlook. And, for reasons that I just can’t comprehend, “10/31 Part II” opens with nearly 12 minutes of fake previews for ‘upcoming’ horror movies. The problem is that none of the movies being promoted are anything anyone would actually want to see.

Jakob’s Wife (98 minutes) — One of the best horror movies so far in 2021, and one of the best vampire movies in recent memory, which features an acting tour-de-force from genre veterans Barbara Crampton and Larry Fessenden, is now streaming exclusively on Shudder.

After the End (90 minutes) — A new pandemic thriller about warring factions of survivors is now streaming.

The Unthinkable (129 minutes) — This Swedish disaster flick is now streaming.