Return of the OG

OG Anunoby returns to the Raptors; can he spark a run before the All-Star Break? 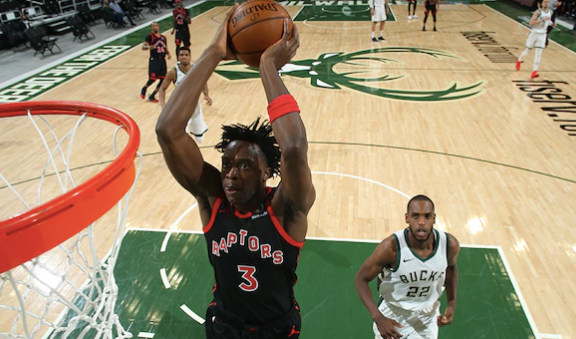 OG Anunoby is having a career year. He’s averaging career-highs in points per game and three-point shooting, while continuing his stellar play on the defensive end.

Anunoby missed 10 games before returning Tuesday night in the Raptors’ 124-113 victory over the Milwaukee Bucks. He only scored 13 points on 5-9 shooting from the field, but the energy he provided the Raptors’ new small-ball lineup (with the 6-foot 8-inch Pascal Siakam at the “center” position) was contagious. He ended up with a +18 rating, good for second highest on the team for the game, and made plays all over the floor, grabbing seven boards and racking up a steal and a block.

The British-American (born in London, his real name is Ogugua Anunoby, Jr., after his Nigerian father) may lack the notoriety of a lot of other young stars like Luka Doncic and Zion Williamson, but his value to the Raptors is incredibly high. He can shoot it from deep, shooting 43% from three-point-land this year, a career high, and his height (6-foot 7-inches), length and athleticism enable him to guard pretty much anyone on the court. That was on full display against the Bucks, as he was able to keep up with the Bucks’ big man Brook Lopez and was able to kind of contain Giannis Antetokounmpo, “limiting” the Greek Freak to 34 points.

While the Raptors’ small lineup may not be viable in the playoffs if they end up drawing a team like the 76ers and Joel Embiid (who is having an MVP season), but Toronto's lineup could work really well against the Brooklyn despite the Nets' three nuclear warheads in James Harden, Kevin Durant and Kyrie Irving. The Raps could switch Siakam or Anunoby on pick-and-rolls, as both are quality perimeter defenders, and they can take advantage of the Nets’ awful defense, which is 28th in the league in points allowed per game.

But we’re getting ahead of ourselves. For now, the Raptors need to concern themselves with continuing their solid play as of late, especially with star point guard Kyle Lowry questionable for Thursday’s rematch with the Bucks.