While still in a pilot, with the CALL program's future question, the Sunshine City has moved faster than neighboring municipalities.

cityofstpete/Flickr
St. Petersburg Chief Anthony Holloway (R) who actually did something after a July press conference where he said his community is ready for a change.

Less than two months after local protests for George Floyd of Minneapolis began last summer, the city of St. Petersburg decided to follow the lead of multiple cities nationwide that have moved to establish civilian responder programs that would have crisis workers, not police officers, respond to nonviolent emergency calls in the community.

“Our citizens are asking for change,” said Chief Anthony Holloway of the St. Pete Police Department during the city’s initial announcement last July. “The city of St. Petersburg and our police department are ready for change.”

ONE YEAR LATER
• In Tampa, it’s task forces, talks and slow moving review board changes
• In the face of white supremacists local activists have no plans to back off
• Only investments of money and real political will can bring holistic justice to communities

Fully-staffed since mid-April, the program has a program director, three clinical supervisors, and 12 unarmed social workers, known as navigators, who respond to nonviolent crisis calls dispatched through the 911 system between 8 a.m. to midnight, utilizing local community centers as drop-in sites.

According to Chief Operating Officer Terri Balliet of Gulf Coast JFCS, who oversees the new program, social workers with CALL have responded to over 350 nonviolent crisis calls for service and over 280 follow-up calls in the community since February.

About 60% of these calls, she says, have been related to mental health issues, which might include anything from thoughts of suicide, to a family member seeking help for a loved one experiencing mania or psychosis.

Reducing the community’s reliance on law enforcement to respond to mental health crises is an issue of critical importance in Tampa Bay. Several local residents with suspected or confirmed mental health issues—including Dominique Mulkey and Jeffrey Haarsma in 2020, and Sidney Richardson in 2018—have been fatally shot by local police in the last few years.

Dave Decker
Activists with the mother of Dominique Mulkey who was killed by Tampa police on October 20, 2020.

Each year, over 1,000 people are killed by U.S. law enforcement, according to data collected by Mapping Police Violence. Up to 50% of these fatal encounters with law enforcement involve a person with mental illness.

Although specialized training programs, such as Crisis Intervention Training (CIT), have been implemented locally to improve officers’ responses to mental health crises, this police-based reform is controversial, and many mental health advocates and police leaders assert that social service workers are better equipped to handle situations of emotional and psychological distress.

“Instead of sending an officer to put a Band-Aid on the issue for a day or two, we should send mental health and de-escalation experts, who are actually equipped to find long-term solutions,” said retired police officer David Franco of the Chicago Police Department in an opinion piece published last year for the Chicago-Sun Times.

Through St. Pete’s new CALL program, social workers who are dispatched to calls first handle the immediate crisis at hand, but their work doesn’t stop there. During that initial contact, the navigators will connect individuals with wraparound support services in the community, offered internally through Gulf Coast JFCS, or through one of the organization’s partners.

“It’s not just like a 2-1-1 or a referral,” Balliet told Creative Loafing Tampa Bay in a phone interview. “We’re going to make sure that client has wraparound services” before leaving any person in distress.

And while social workers initially responded to calls with St. Pete police officers, the CALL program is moving further away from the traditional police response each day—in line with what the city initially promised.

Special Projects Manager Megan McGee of the St. Pete Police Department told CL the program currently has social workers responding to calls in teams of two, with a police officer in the near vicinity. However, the end goal is to have social workers respond to these nonviolent calls independently, without any police presence. According to Balliet of Gulf Coast, this could happen as early as July.

Both McGee and Balliet say they want to prioritize the safety and comfort level of CALL staff as they move forward towards a fully independent response.“We need to make sure that everybody’s on-board,” Balliet said, who has helped coordinate specialized training for the program's social service staff.

Meanwhile, some of the more seasoned clinical workers with CALL, she says, have already begun responding to calls without police, driving their own personal vehicles—not police cruisers, wearing polo shirts with the CALL logo clearly printed on the front.

Funding for the pilot program, which had been originally earmarked for the hiring of 25 new police officers, totals about $3.125 million over the course of three years, beginning with an initial $850,000 contract awarded to Gulf Coast JFCS in January, to cover the program’s pilot period through September.

This modest budget has been one point of concern among local activists, who worry that underfunding could detriment the effectiveness of the program, pointing to the budgets of similar programs elsewhere.

In Eugene, Oregon for example, the city’s Crisis Assistance Helping Out On The Streets (CAHOOTS) program operates on an annual budget of $2.1 million, serving a population of roughly 170,000 compared to St. Pete’s 261,000.

Annually, CAHOOTS services about 20% of the area’s 911 calls, saving the city an estimated $8.5 million in public safety spending, by dispatching teams of medics and crisis workers to nonviolent emergencies instead of Eugene police. In 2019, less than 1% of the 24,000 calls CAHOOTS responded to required further police assistance.

“When I look at the different calls coming through that the CALL team is dispatched to, you know, I think we're [the St. Pete Police Department] even more sure that this is the direction we should be going in to better address the needs of our citizens,” McGee told CL in a phone interview.

In July, the St. Pete City Council will vote on whether to renew their contract with Gulf Coast JFCS to continue leading the new community program. 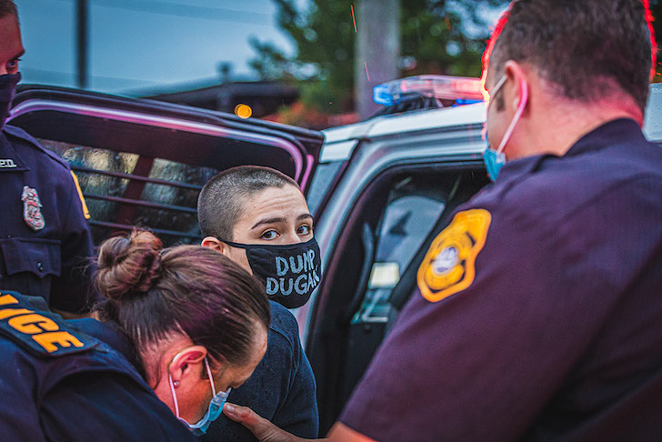 Where the rest of Tampa Bay stands

While St. Pete has rolled out the most advanced crisis response reform in Tampa Bay over the last year, other local law enforcement agencies have introduced their own police-based solutions to handling psychological distress.

Two police departments in Largo and Belleair, for instance, have begun utilizing a program called TRACE, or Telehealth Remote Access to Crisis Evaluation—which trains officers to use tablets to connect people in distress with a counselor remotely, in an effort to reduce the number of involuntary psychiatric holds initiated by police under Florida’s Baker Act.

According to Pinellas County Sheriff Bob Gualtieri—who expanded his agency’s Mental Health Unit last year—about 11,000 of the 200,000 Baker Acts initiated in Florida each year occur in Pinellas County. More than half of the state’s Baker Acts are initiated by police, despite widespread concern regarding their qualifications to accurately identify a life-threatening mental crisis.

This notion of crisis prevention is a key component of local “Defund the Police” campaigns, which call not only to reduce city police budgets, but to redistribute those funds into community programs and initiatives to address the root causes of crisis—such as poverty, unstable housing, and the inability to access long-term health services.

“We have to build our communities to the point that we don’t rely on the police and capitalists, where we keep each other safe and hold each other accountable,” ErrDaisha Floyd, a local activist told CL in April, describing her vision of a future without police.

Preventing mental health crises was recently addressed by Tampa Mayor Jane Castor in an April meeting for her Community Task Force on Policing, which was established in June of last year in response to Black Lives Matter protests. “No one calls the police when things are good,” Castor told the group, who met virtually over Zoom.

Identifying “high utilizers” of emergency care services and providing support for these individuals before a crisis develops, she said, could prevent repeat calls and reduce interactions with law enforcement.

During the same meeting, Mayor Castor—who is herself a former Chief of Police—praised the Tampa Police Department for its ongoing partnership with local behavioral health providers which are, together, exploring options for Tampa’s own pilot mental health program.

Unlike St. Pete’s program, however, the city of Tampa is moving ahead with the development of a “co-response” program, which would have mental health workers respond to distress calls with Tampa police officers—and not independently.

Such a program has been in the works since last September, after Tampa City Councilman John Dingfelder made a motion for the city to allocate $1 million for its development.

At the time, Dingfelder said he’d received numerous calls, emails, and other communications from local activists who wanted to see a civilian responder program, like Eugene’s CAHOOTS, implemented here in Tampa.

“We’re disappointed, to say the least,” said members of the Restorative Justice Coalition, in an emailed statement to CL. “Our City is choosing to be behind the times so we can prolong this fantasy that police violence, handcuffs, pepper spray, drones, and militarization keep us safe when we have long understood that community protection and resources are what truly keep us safe.”

Even Mayor Castor, who gifted the Tampa Police Department a major budget boost this year, has acknowledged the effect that a police presence can have on people in crisis. “Sometimes just by the mere arrival of the officers in that uniform, there's an escalation,” Castor said, during the April task force meeting.

With the recent passage of Florida Republicans’ House Bill 1, the possibility of diverting police department funds towards community behavioral health services has become less probable, with cities that “defund” their police departments now at risk of being defunded themselves.

Even so, local activists are undeterred, despite the bill’s implications for the safety and legality of expressing First Amendment rights through peaceful protest. “The fight is not over,” says Florida’s Dream Defenders, a racial justice organization that is one of several groups now suing Florida Governor Ron DeSantis over the legality of House Bill 1. “We will always step up for our communities. This is who we are, and it will take more than a stroke of DeSantis’ pen for our legacy to end. We will meet DeSantis in court.”