Both Hillsborough and Pinellas don’t offer the assistance for non-traditional leases. 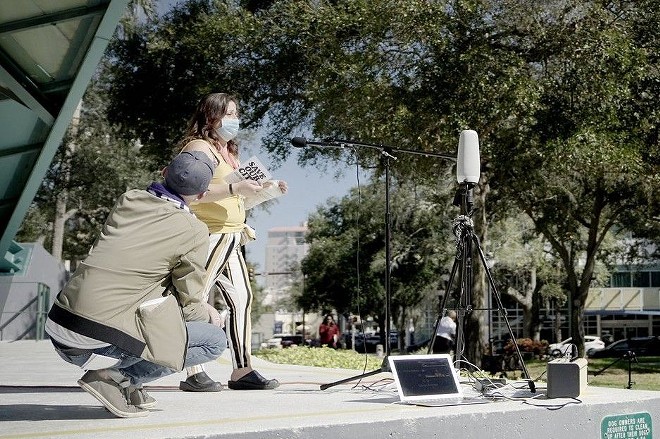 Teuta Sadiku left her St. Petersburg motel and waited for her bus in yesterday's early morning cold. She looked at the wrist that she broke when she fell in her room and pleaded with God to heal it faster. She needs to work if she wants to stay in her motel room, which is essentially an efficiency, complete with a kitchen and stove, and costs $1,000 a month.

The 48-year-old prayed that her job interview at a St. Pete Beach restaurant would go well. On the bus, she met a man who was kind to her. When she got off the bus to walk to her interview she thought, "Maybe I should've asked him if he could help pay my rent?"

Sadiku lives on a non-traditional weekly lease and  finds herself stranded without  emergency rental assistance help during the ongoing pandemic. Federal Emergency Rental Assistance Program (ERAP) guidelines technically allow funding for people like Sadiku, but Pinellas County has decided not to distribute those funds to those in her situation. Her application was denied after the St. Pete Tenant's Union (SPTU) helped her fill it out.

Even though she's been living at the motel for a year-and-a-half, Sadiku is now struggling to survive after the denial. She's out looking for jobs, hoping that she can make next week's rent.

"I really want to work, but until I find a job I just need a little help so I don't lose my apartment, or things will get worse for me," she told Creative Loafing Tampa Bay.

Teuta Sadiku
Sadiku sent CL a selfie from inside her apartment.

Pinellas County said that people in Sadiku's situation aren't receiving assistance because they want to use the funding to concentrate on traditional types of renters.

"While [federal] Treasury guidance does allow emergency rental assistance programs to cover hotel or motel costs for eligible households, the Pinellas County ERAP does not cover hotel or motel costs at this time," Pinellas County's public information coordinator told CL. "This allows us to focus our ERAP resources on preventing evictions and keeping residents in their homes."

Initially federal guidelines said that ERAP funds could not be used for non-traditional leases, but the language of the guidelines was later amended to include hotels and motels. Still, Pinellas said that they want to focus on traditional housing. So far, the county has distributed $20.3 million in ERAP funding, with the City of St. Petersburg adding $10.1 million.

Raymond Holmes III finds himself in a similar situation as Sadiku. He rents at the Whitney Hotel in downtown St. Pete for $800 month as he lives on a tight social security income. He was taken aback at the denial of his application, after SPTU helped him apply for it. At 69-years-old, becoming homeless would be rough on him.

He moved into the Whitney in December after being suddenly evicted from the Stanton Inn a building that's being demolished for the expansion of the boutique Cordova Inn Hotel. During the mass eviction, a neighbor of Holmes' died while moving out.

A St. Pete renter who was hastily evicted for a hotel expansion died while moving out: A vigil and protest is planned for Kelvin Washington on Saturday.

Holmes got out with his health in tact and went to the Whitney, because it was on the same block as The Stanton. Even though the Whitney is technically called a hotel, it's definitely not. It's a living situation more akin to single room occupancy (SRO) units—small, furnished rooms usually geared toward low-income tenants.

"I think the economic expansion in the area is great and everything, but I don't know how long it will be before the Whitney gets turned into a boutique hotel," Holmes told CL. "If there's going to be development, the city also has to concentrate on preserving and building more SRO's for regular people, and making sure everyone who needs rental assistance gets it."

Across the bay in Hillsborough County, the situation with ERAP assistance is the same, but the county didn't confirm their reasoning behind denying people with non-traditional leases. As of today, Hillsborough has reached its limit in ERAP funding, after obligating more than $54 million in financial assistance to residents and landlords. The program has approved funding for more than 13,000 applicants.

The senior media relation strategist at Hillsborough County said that the charity Metropolitan Ministries (MM) helps with motel rental assistance but didn't know the details of how long they assist renters. On Metro's website, there are applications for emergency housing and affordable housing, but links to emergency rental assistance just link back to county websites. CL reached out to MM for more input but has to receive a response.


Besides everyday Americans who find themselves on the verge of homelessness, refugees also often wind up in non-traditional housing. Last year, after the U.S. pulled troops out of Afghanistan, refugees found themselves in Tampa Bay living in apartments and Airbnbs while waiting to find traditional housing. One Afghan refugee told the Tampa Bay Times that she while landlords can be hesitant to sign a lease with refugees, they are "hard-working, highly skilled people who make great tenants."


And as the pandemic wrecks people's lives, motels and other non-traditional housing become more and more of a last resort for people not just in Tampa Bay, but across the state.

Last September in Osceola County, an hour east of Tampa Bay, Spectrum News 13 reported that a single-parent family of four found itself living in a hotel last year as the father tried to support the family while driving Uber. In that same county, several families living in motels found their lives in chaos after ERAP funding was denied to them due to to their non-traditional leases.

Yet, in other parts of the country like Vermont, those on the edge of homelessness are able to use ERAP funding to keep motel roofs over their heads.

Back in St. Pete, Teuta Sadiku is wondering if she's going to be able to make next month's rent at her apartment, and if homelessness is in her future.

"I'm just like a lot of people who are having a hard time right now," she said.

Every day at her motel, she takes her Bible in her hands and prays that things will change.
© 2022 Creative Loafing Tampa Bay