Kumquats have grown in Pasco County since the late 1800s. 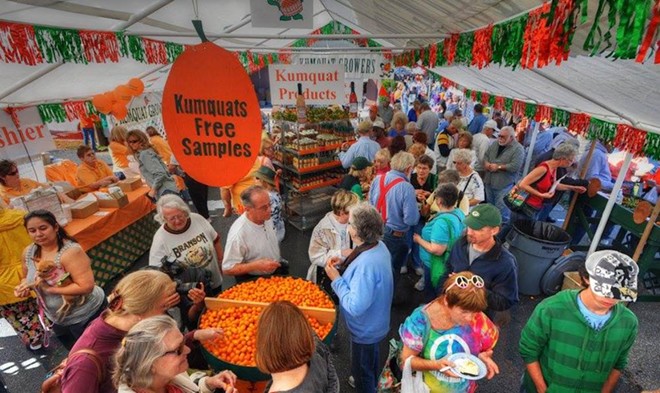 Photo via KumquatFestival/Facebook
Dade City Kumquat Festival
Thousands will descend upon Dade City this weekend for its annual Kumquat Festival and enjoy delicious kumquat foods from pies to cookies to ice cream.

Of course, while the state of Florida is known for oranges and other citrus fruits, the kumquat is a smaller citrus mainly grown in Pasco County since the late 1800s. Kumquats are native to China—their name means “golden orange”—and the most popular type grown in the U.S. is the Nagami. Florida kumquat season is short so get them while you can between October and February.

Creative Loafing Tampa reached out to Chris Oswalt, University of Florida/Institute of Food and Agricultural Sciences (UF/IFAS) Citrus Extraction Agent for Polk and Hillsborough Counties, to get a better understanding of the fruit and how it holds up against its other citrus cousins. Oswalt says volume-wise, kumquats don’t come close to the other citrus varieties like oranges and tangerines.
“Kumquats do grow in Florida but they’re more of a specialty citrus item,” he said.

He explained the reason why kumquats aren’t as big as other citrus is because they aren’t sourced from multiple locations. The only other place in the U.S. that grows kumquats is California.

“You have to have a market for it and there’s a lot that goes into that,” he said. “That way you have a stable footprint in the produce department.”

Kumquats are so small of an industry, Oswalt says five acres may be enough to saturate the kumquat’s regional market.

“It’s in the citrus family but it’s not like normal citrus. It’s kinda unique,” he said.

Oswalt and other agents help citrus grove owners enhance production and profits of their business through educational programs like monthly newsletters, grower meetings, where researchers provide the latest information and data growers can apply to their businesses and the Florida Citrus Growers’ Institutes.

“My job isn’t to do research but I cooperate and help researchers with their projects if they’re out in the field,” said Oswalt. “We’ll facilitate interactions between the researchers and growers.”

The Florida Citrus Growers’ Institutes is an all-day event where growers from all across the state come together and familiarize themselves with new practices that benefit their crops. This year’s event takes place in-person at South Florida State College in Avon Park.

“The information is provided to growers and we put together this opportunity for them to learn something that is useful for their operations,” he said.

Oswalt said the good thing about kumquats is the trees are able to withstand cold temperatures (the fruit though…not so much).

“The trees can grow just about anywhere in Florida,” he said. “You’d want to plant them in a place that’s a little bit warmer so the fruit doesn’t get damaged.”

Bring your tote bags and appetites to the Kumquat Festival Saturday, Jan. 29 from 9 a.m.-5 p.m. Admission is free for everyone and there will be free parking available in Downtown Dade City.
© 2022 Creative Loafing Tampa Bay