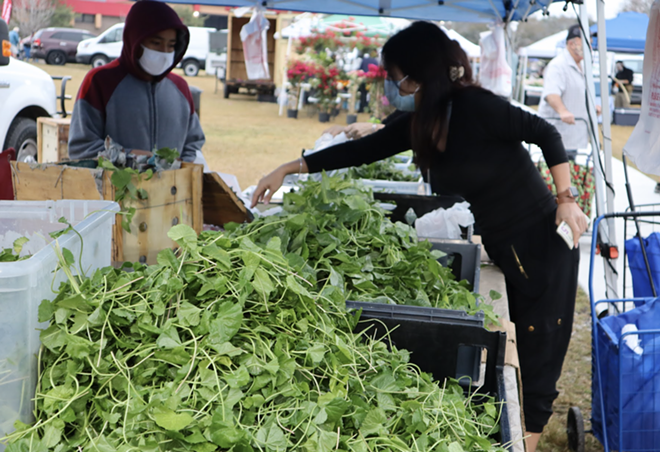 At 7:30 a.m. on any given Sunday, the Pinellas Farmers & Flea Market at 13600 Icot Blvd. in Clearwater is already bustling with hundreds of customers, up early to get first dibs on locally-grown produce, fresh seafood, second hand wares, and everything in-between.

Most of the produce and readymade food vendors are of Asian heritage. These merchants have immigrated from a wide range of countries like China, the Philippines, Laos, Cambodia, Thailand, Vietnam, India, Indonesia and beyond.

Folks balancing long sugarcane stalks on their shoulders weave in between tables filled with jackfruit and grandmas pulling roller carts filled with leafy greens. The sound of a machete thwacking coconuts open melds into a rhythmic Thai song playing out of a nearby portable speaker. Smells of fresh BBQ pork from Masarap Bowls and freshly-fried spring rolls from Thuy Cafe’s stand fill the air.

With over 100 vendors packed into an empty Clearwater parking lot, this year-old market has grown exponentially since it first began. What started out in January 2021 as a way to support Tampa Bay-based Asian farmers, has evolved into a hybrid farmer-and-flea market that provides shoppers with a multifaceted experience. While one side of the park is stacked with a variety of Asian vendors selling fresh produce—typically grown in their own yards—the other is full of folks selling secondhand goods, used items and anything else you’d expect to see at a typical flea market.

Many of these non-food vendors used to sell at Pinellas Park’s Wagon Wheel Flea Market, which unexpectedly shuttered its doors in mid 2020, and Clearwater’s 49er flea market, which closed in 2017.

And the weekly market’s customers come from places throughout Tampa Bay and beyond as well. Shawn Yang— organizer for the Pinellas Farmers & Flea Market—tells Creative Loafing Tampa Bay that its patrons travel from places as far away as Ft. Myers and Lakeland to shop there, as many of its merchants sell specialized products vital to certain types of Asian cuisine.

“Many of our Asian customers grew up with this kind of market, and they like the opportunity to shop like this again—to be able to touch, smell and taste everything. The Asians—we’re all about freshness,” Yang says with a laugh.

Pinellas Park’s MD Oriental, a popular Asian grocery store a few miles away from the Icot Center, doesn’t even sell some of the goods available at the market. With stands specializing in smoked fish, Southeast Asian fruit and vegetables that thrive in Florida’s tropical climate, and even cultural clothing and accessories—this farmers market is a one-stop shop for a variety of Asian folks.

While some vendors are elderly and use their weekend profits to supplement social security, others work full-time jobs Monday through Friday in addition to the weekend market. With an entire day of vending only costing $30-50, the Pinellas Farmers & Flea Market is extremely accessible to a wide range of people that need the weekend hustle to provide extra income for their families.

A Thai woman named Suki Prasanesy has worked as a full-time fruit cutter at a Publix in Tampa for over three decades. But on the weekends, she cooks fresh Thai sweets for market-goers. 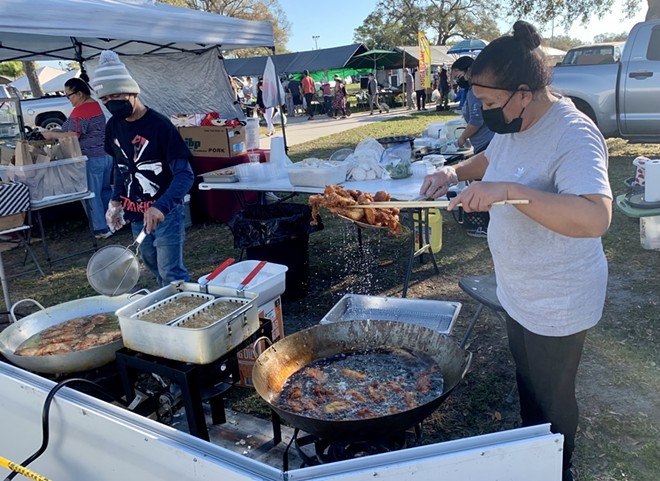 “I sold food at the ​​Wat Mongkolratanaram temple in Tampa for almost 20 years,'' she tells CL, while squatting over a large wok of fried bananas. “But now my family and I come here instead.” The conversation quickly ends as the bananas start to overly brown.

She’s joined by her husband and daughter as they cook fresh desserts like mango with sticky rice and stuffed buns, while her sister greets their customers. Somewhere across the market, Prasanesy’s elderly mothers sells fruits and vegetables. Like with many other vendors at the Pinellas Farmers & Flea Market, the weekend hustle is a family affair.

Kia Xiong ,originally from Laos, sells a variety of homemade Thai jellies, candies, fruit juices and fresh produce with her daughter. She lived in Thailand for 17 years before coming to the U.S., and decided to sell Thai treats instead of her own country's cuisine due to the large number of people already serving Laotian food at the market.

She’s only been vending at the market for a few weeks, but says that their drive all the way from Lakeland is definitely worth it. Xiong sells leafy greens and garlic from her own garden, and tries to make her booth as diverse as possible, as vending is currently her only source of income.

During our conversation, Xiong introduces me to her to elderly grandmother who also vends at the market every weekend, selling fresh produce and fried sesame balls. 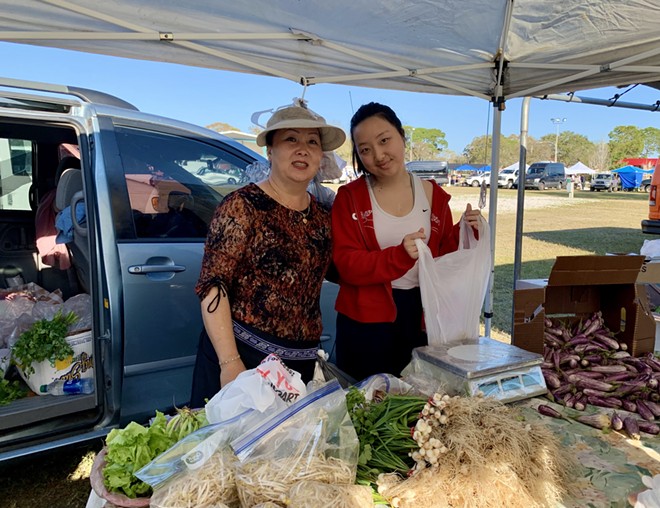 Kyla Fields
Kia Xiong and her daughter at their stand.
Although the market grew exponentially at its previous location in Pinellas Park, Yang says that the market's recent move to Clearwater was vital for the continuation of its success. The significantly larger space of the Icot Center allows vendors to sell on Saturday as well as Sunday— a request that many merchants made to him at their old location.

It's only been a few weeks since the market moved to Clearwater, as the Pinellas Farmers and Flea Market now happens every weekend from 7 a.m. to 2 p.m.

Yang and his team are now able to add more vendors to their weekly roster—as there are over 100 of them on a waiting list. Although England Brothers Park was an ideal location due to Pinellas Park's high Asian population, the Icot Center will not subject vendors to blackout days when the city needs the space for another event.

According to recent census data, about 8.3% of Pinellas Park residents are Asian—compared to lower percentages in surrounding areas, like St. Pete’s 3.5%.

Yang currently works as an environmental specialist for Hillsborough County, but also has vast experience organizing cultural events for different groups like the Florida Hmong Community—often at Pinellas’ England Brothers Park. When he first started the market last year, he reached out to many of the original produce and food vendors personally. Since then, the number of vendors have increased exponentially, due to word of mouth and popularity on Facebook.

Yang also tells CL that he’s working on getting SNAP benefits or EBT accepted at the farmers market, to make its fresh produce and goods as accessible as possible.

The Pinellas Farmers & Flea Market hosted a traditional Chinese dragon dance to celebrate the recent lunar new year , and Yang says that more cultural programming is set for mid-April, for the Lao new year. The market is constantly evolving, and Yang and his team (which also includes his wife and two kids) sees no end in its growth—especially with its new massive location.

If you’re interested in vending, contact the market on Facebook or Yang personally at 727-644-2899. An event permit is required to cook food at the market, while food prepared residentially—like baked goods—falls under the FDA’s cottage food operations and doesn't require any licenses or permits.