With plenty of fresh songs for the live setlist, too. 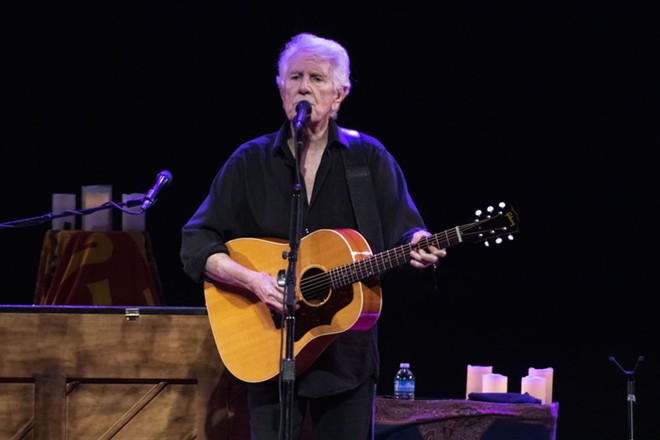 Photo by Josh Bradley
Last Friday night, on the 52nd birthday of Déjà Vu—one of rock and roll’s most revered albums—Graham Nash ambled out onto a Clearwater stage for the first time since his own 74th birthday in 2016.

The 80-year-old two-time Rock and Roll Hall of Fame inductee had his Friday night performance postponed thrice. The original date was set for March 19, 2020. Then it was pushed to November 2020, April 2021, and finally, March 11, 2022. Some attendees had been patiently waiting to attend since the somewhat simpler time known as Christmas of 2019, and to say that Crosby, Stills, and Nash’s tenor made it worth the wait is an understatement. A rarity for a venue under the Ruth Eckerd Hall umbrella, a negative COVID-19 test, or proof of vaccination was required to get in, as well as masks. A good quarter of the audience broke the mask rule, and you could feel the middle finger Nash was mentally giving them for doing so.

Only two people—both CSN backing band alum—supported Nash: Todd Caldwell on the organ, and Shane Fontayne on guitar. They would also provide harmonious backing vocals deeper than Crosby and Stills', but knowing the tension that the supergroup is going through, we’ll take what we can get, OK?

You know what he’s like: There’s ego, but of the three in CSN, Nash seems the most outgoing. Stills was the enigmatic one, Crosby was the asshole, and Neil wasn’t there most of the time. So when the lights went down a bit after 8 p.m., Nash, dressed in a half-buttoned up black shirt and jeans, came out and dedicated “Find the Cost of Freedom” to everybody suffering in the Ukraine, which would segue into his solo tune, “Military Madness,” appropriately.

“I hope that Putin discovers what’s driving the people wild,” he sang.

After the sentimental “Wasted on the Way,” Nash revealed that during the pandemic, he had been working on an album with former Hollies bandmate—and friend of 74 years—Allan Clarke, fresh out of retirement, and dedicated the band’s “Bus Stop” to him. “I did go to America to join David and Stephen, but fuck, [The Hollies] had two no. 1 records after I left. Fuck them!” Nash rambled, to the humorous pleasure of his ex-hippie drowned crowd. “I mean that in the nicest way.” 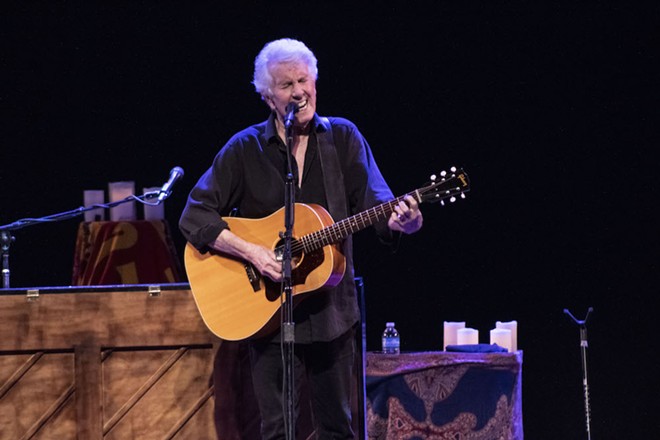 Photo by Josh Bradley
If not for Nash, there may not have been as many hits from CSN. Sure, Crosby had “Wooden Ships,” “Almost Cut My Hair,” and “Delta,” and if you skip over "Helplessly Hoping" and “Suite: Judy Blue Eyes” on your playlist—both penned by Stills—you’re a psychopath. The workload seemed even in the band, but Nash was the lucky one who managed to compose a good chunk of the hit-worthy songs. Somewhere at Abbey Road, there’s a tape of The Hollies doing “Marrakesh Express,” which Nash hated, due to not giving off the feeling of a train. His Friday night version of it didn’t either, but sometimes, when it’s more than years later, you have to choose between original time signature, and original key. Nash chose the latter.

He gave himself a pat on the back after finishing “Immigration Man,” a Crosby-Nash composition. “It’s so weird how it seems that so many of my songs were written yesterday,” he stated very seriously.

Nash would then move to a classroom piano for the ultimate atheist anthem, “Cathedral,” which featured a special guest appearance from the Bilheimer Capitol Theatre’s mini Stonehenge dangling above Nash’s head. Ending act 1 was the Stills-penned “Love The One You’re With,” and as one does, Nash blamed his bladder for the 20-minute intermission, but came back out as strong as ever. In an effort to keep the band fresh, a few tour debuts were offered. Neil Young’s “Only Love Can Break Your Heart” moved into the sport reserved for the Joni Mitchell cover, and Nash's solo live debut of early CSN cut “Unequal Love” was dedicated to legendary archivist Joel Bernstein. “He can’t find the right woman,” Nash joked.

His solo hit, “Golden Days” rings truer now more than ever. “What happened to ‘All You Need Is Love’?/And time will always pass/There goes another day/So slowly yet so fast,” he sang. Deep down, he’s gotta miss the hell out of his hippie brethren and must want to do at least one more project with Croz and Stills. Especially considering the fact that he dove straight into “4 + 20” right after, citing the first time Stills played it for him as one of his favorite musical memories. Another shocking appearance was “Country Girl,” one of Neil Young’s contributions to Déjà Vu that had never been played by any of CSN before this year. 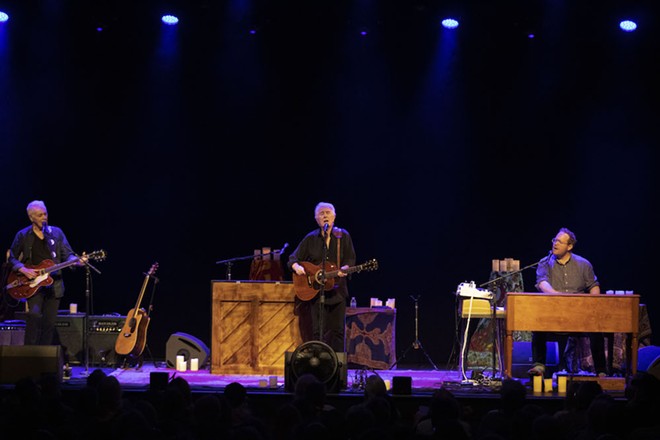 Photo by Josh Bradley
The rest of Graham’s set was nothing but a gigantic singalong. You know, “Our House,” “Ohio,” and “Teach Your Children,” which this writer certainly did not cry during.

God bless him, too.