Fox News profits from abandoning any pretense of journalistic responsibility, and we sadly can’t escape it 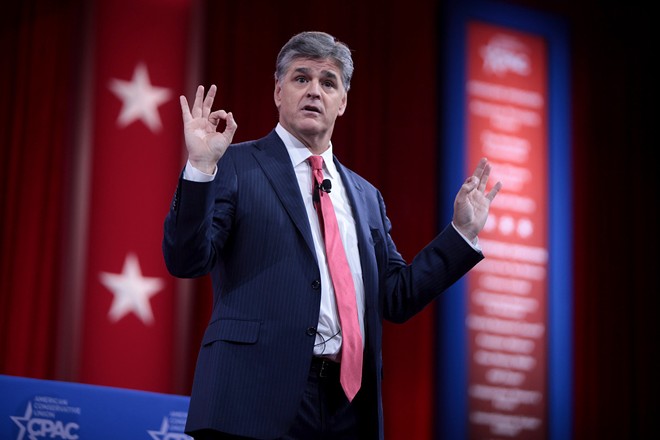 Gage Skidmore from Peoria, AZ, United States of America / CC BY-SA (https://creativecommons.org/licenses/by-sa/2.0)
If those who are consistently fed dead-eyed propaganda watched responsible, fact-based reporting for a period of time, at least some of them would rethink their positions.
What I most clearly recall from the media ethics class I took as an undergrad—yes, there was such a thing, and yes, this was two decades ago—was the idea that the media can’t tell you what to think, but it can tell you what to think about. (There was also a block about the outrageous profits newspaper companies made, but that no longer seems relevant.)

To put that another way: Journalists are gatekeepers of which issues are deemed important and which perspectives are presented to the public—which is why we should seek out underrepresented voices rather than, say, camping out at a diner in rural Michigan to ask about cancel culture, but I digress.

On second thought, that’s not a digression. Throughout the last century, powerful publishers and television news producers too often failed to elevate the perspectives of those who didn’t look or think like them. (That’s why alternative newspapers propagated in the 1950s and ’60s.) But the gatekeepers could also sideline kooks and conspiracy theorists and charlatans—which, when I’m doomscrolling Twitter, seems not so bad.

The landscape changed when Rupert Murdoch launched Fox News in 1996, and then with the internet’s democratization of media and the proliferation of social media. Journalists’ gatekeeper function is limited. A big New York Times story can drive the national conversation, but so can some idiotic dreck from the Daily Wire. So, my point?

On Sunday, political scientists from Yale and UC-Berkeley published a remarkable—and disturbing—study about the effects of partisan media. They took regular Fox viewers and bribed them to watch CNN for a month, during September 2020.

“Despite regular Fox viewers being largely strong partisans, we found manifold effects of changing the slant of their media diets on their factual beliefs, attitudes, perceptions of issues’ importance, and overall political views,” they write.

And here’s the kicker: “Partisan media does not only present its side an electoral advantage—it may present a challenge for democratic accountability.”

No shit, you say. But the experiment showed why partisan media is so pernicious—and effective. Contrary to common perception, people—even hyperpolitical people who watch cable news—can change their minds when exposed to new information. If those who are consistently fed white nationalism (Tucker Carlson) or dead-eyed propaganda (Sean Hannity) watched responsible, fact-based reporting for a period of time, at least some of them would rethink their positions.

During the experiment, CNN focused on the COVID-19 pandemic, including Trump’s lackluster response to the crisis. Fox, on the other hand, barely covered the pandemic, and when it did so dismissed its severity. Instead, Fox obsessed over racial issues and “provided extensive information about [Joe] Biden and other Democrats’ supposed positions on them and about outbreaks of violence at protests for racial justice in American cities,” the researchers write.

Think about that: Two months before the election, conservatives were being told that the most pressing issue the country faced wasn’t the virus that was killing thousands of people a day while the president denied it was a big deal, but outbreaks of vandalism at Black Lives Matter rallies. (The reason people were marching didn’t seem as important.)

This messaging, which is designed to appeal to racial animus, is then reinforced by social media feeds that allow users to avoid engaging with anything that looks like an opposing view. And we wonder why conservatives are suddenly foaming at the mouth about critical race theory and trans kids in schools.

For conservatives, Fox News is the agenda setter. Unfortunately, its agenda serves a strictly partisan purpose.

It’s not just that Fox gaslights: “Even though Fox News never explicitly stated that Biden supported cutting police funding, it strongly implied this, and [experiment participants] who were assigned to continue watching Fox were more likely to believe this.” Fox has also engaged in what the researchers call partisan coverage filtering—“selectively reporting information flattering to its ideological side.”

As the researchers notes, this presents a problem for our democracy: “Fox News largely did not inform viewers of Trump’s failure to protect the U.S. from the COVID-19 outbreak, whereas CNN extensively did so. … How can a voter hold a politician accountable for an act of malfeasance if they do not know it occurred?”

The rub, as always, is what to do about it. Bribing millions of people not to watch Fox probably isn’t feasible. The researchers tease the prospect of government regulation, but the First Amendment likely has something to say about that. And moral outrage and even advertiser boycotts won’t matter so long as Fox commands the kind of ratings that allow it to command huge sums from cable companies. So we’re stuck with a powerful gatekeeper that profits from abandoning any pretense of journalistic responsibility.
© 2022 Creative Loafing Tampa Bay