'This just might kill me': Residents at East Tampa apartment complex live in black mold and rodent 'nightmare'

The property management company has a history of serious complaints from around Florida. 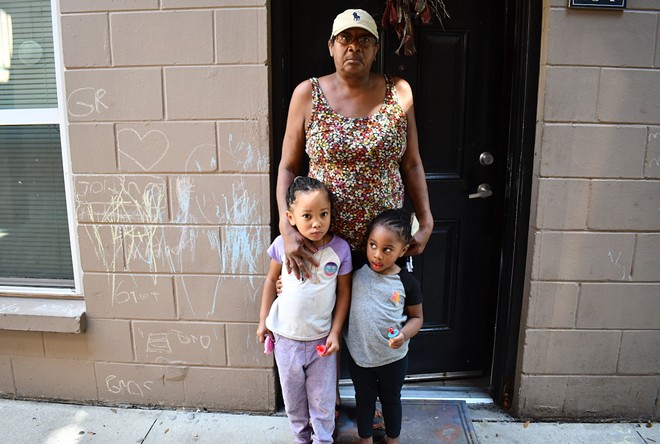 Justin Garcia
Venita Walden stands outside of her apartment at Silver Oaks with her granddaughters.
At Silver Oaks Apartments in East Tampa, residents are living in conditions so unhealthy that residents just want a way out of what they refer to as a "nightmare."

Black mold, flooding, rodents and unstable infrastructure have left tenants desperate, and feeling like their lives are in danger.

Adrian Shepard said she was lying in bed when her ceiling caved in, and the debris broke her foot and toes. She was in a cast for four months, and says she doesn't use that room for fear of getting hurt again. Pieces of the ceiling are still hanging down in the unused room. That was nearly five months ago, and the damage still hasn't been completely repaired.

"I got a lawyer and they've been sending them emails but they haven't responded. But the problems at this place don't stop there," she told Creative Loafing Tampa Bay.

Her apartment has flooded from leaking ceilings, overflowing toilets and sinks so often that the floor tiles have cracked from the moisture. Her kitchen has been full of water off and on for the past few weeks, and holes in her bathroom ceiling are covered by black garbage bags and tape.

Then, there's the black mold. It has infested Shepard's and several other tenant's apartments, causing respiratory issues. The property managers painted over the mold and said it's fine, resident Shantia Little told CL.

Little and her three kids can smell the mold despite the paint and the air fresheners they've put around their house, and it's causing them harm.

"One of my kids had asthma and one constantly has allergies, really bad," Little said. "My youngest, who is eight, is sick like, every week. It's a nightmare." 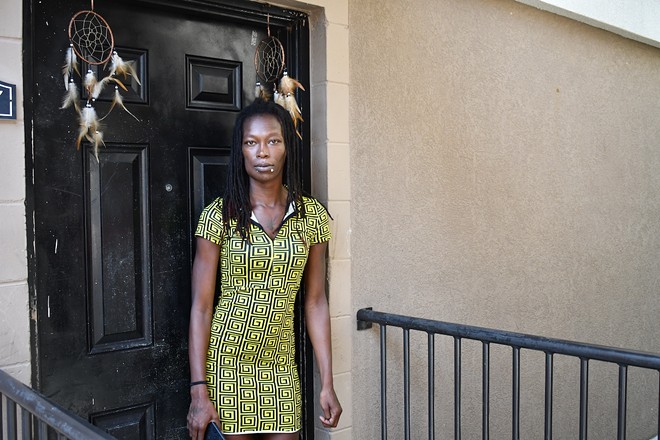 Justin Garcia
Shantia Little stands outside of her apartment at Silver Oaks.
Little's toilet and sinks have also flooded, and like many other residents she was stuck without running water for several days. There's also barely any rodent or pest control from the management company, she said.

The problems at the complex, located at 4200 Kenneth Ct, have been going on for about five years, but since the pandemic kicked in the problems increased, according to Little.

Meanwhile, the property management company, Cambridge Management Inc. received more than $5.3 million in PPP loans during the pandemic, according to ProPublica. The company's website says it specializes in "quality affordable housing." But Cambridge has a history of serious complaints from around Florida, leading to aggressive action from Republican Senator Marco Rubio and Governor Ron DeSantis in 2021.

It was in that year that residents at the Hilltop Village Apartments, an affordable housing community in Jacksonville, complained about several problems at the complex. They cited mold, trash piling up at the dumpster, and rodent infestation issues at the site.

The cries got Rubio's attention, and his team  found that seven of Cambridge Management, Inc. properties in Florida had failing Real Estate Assessment Center inspection scores.

“Over the last two years, HUD has provided more than $17.5 million in federal financial assistance to the seven aforementioned properties,” Rubio wrote in a June 2021 press release. “Last month, my staff visited all of these properties and saw conditions that are unsafe and unsanitary, including chronic garbage overflow and general disrepair at Gadsden Arms Apartments.”

In response to these discoveries, in September of 2021, DeSantis cut off state funding to the company, saying, “Our patience has run out for this developer and their management company’s failed stewardship of safe, decent and affordable housing for Floridians.”

In a press release, DeSantis also mentioned Southport Development Services as the company behind the Hilltop Village Apartments, but did not clarify if the developer is responsible for all of the properties that Cambridge Inc. manages.

CL reached out to Cambridge Inc., which is based in Tacoma, Washington with regional offices in Florida, but has not yet received a response. 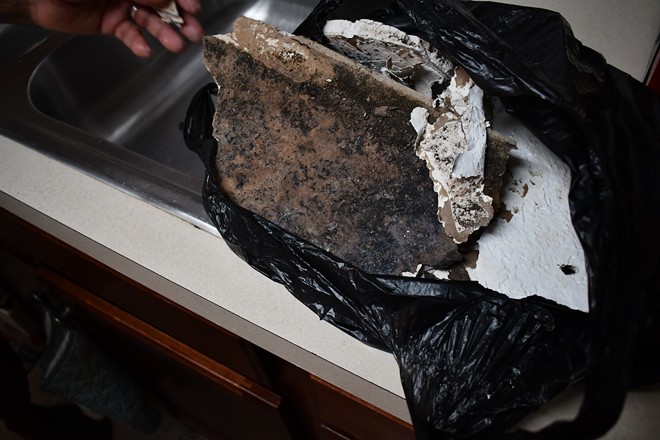 Justin Garcia
Pieces of Walden's broken ceiling that were covered in black mold, which she kept as evidence.
Venita Walden, 62, said that in recent months, her living conditions have been getting worse, with calls for service unanswered as mold infects her entire house where she regularly watches her granddaughters who are three and four years old. She can't keep the mold off her curtains, her clothes, and although the maintenance men have also painted over her black mold, it appeared again, just a few weeks later.

"This just might kill me," said Walden. "And it's hurting the girls. I've tried to move to another place, but I'm using rental assistance and haven't been able to get approved."

Walden and Little are neighbors, and they worry about not only their loved ones and themselves but they see new people moving into what they consider a health hazard.

"They just keep covering this stuff up, and moving new people in," Little said.

The Tampa Tenants Union (TTU) has been in touch with some residents there, who are now talking with some tenants about next steps to address the problems at the complex. TTU has teamed up with tenants to push back on unfair landlord practices around Tampa for the past year, including recently at Holly Court Apartments in North Tampa.

"This is the worst we've seen yet," said Bratton Young of TTU. "These conditions are a violation of human rights."

As tenants and allies search for answers to these dangerous conditions, Walden just hopes that she and others can survive, and that her granddaughters come out of it safely.

"One has asthma, and has trouble breathing real bad," Walden said. "I feel so bad for her and everyone else here, these are deadly conditions we are living in."
© 2022 Creative Loafing Tampa Bay