You’ll have to find another bar for your First Friday ragers. 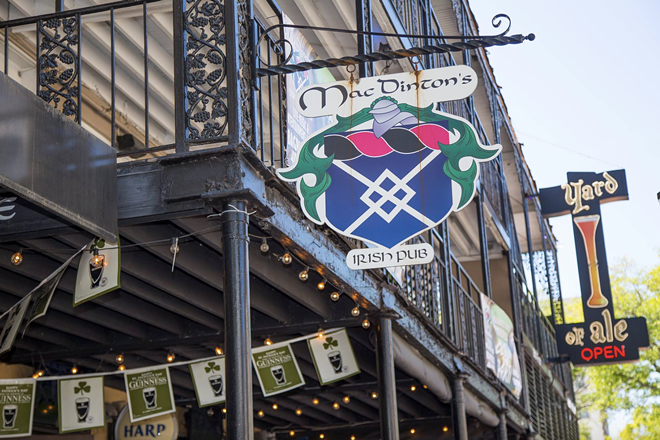 MacDinton's St. Pete / Facebook
When the Facebook page for St. Petersburg’s MacDinton’s posted about its final party a few weeks ago, most of its loyal patrons thought (or at least hoped) that it was an April Fool's Joke.

Without stating why, the popular Irish pub at 242 1st Ave. N officially closed on Saturday, April 2 after one last celebration.

One of its last Facebook posts states “Last Bash at Macs St. Pete! Join us this Saturday, April 2nd, for our last opening day at MacDinton’s in Downtown St. Pete to celebrate our crazy and wonderful years.” The popular bar offered half-off all drinks during its final night of service, as local cover band Obi Wan Knabe & The Force provided live tunes to rage to.

At the time, longtime Ringside manager Mitch Gray told CL that the same folks who were turning his former bar and venue into a 70s disco-themed nightclub, also had plans to transform MacDinton’s into a Western bar.

Months after, it was announced that Ohio-based Forward Hospitality Group was turning Ringside into a retro discotheque called Good Night John Boy—confirming the circulating rumors that Mitch and other downtown St. Pete hospitality workers had been hearing for some time.

Only time will tell if the same hospitality group will turn the former sports-centered Irish pub into downtown St. Pete’s newest spot for line dancing and honky tonking. Notably, one of Forward's many concepts is "Welcome to the Farm" (stylized as WTF), a newly-opened Country music bar co-owned by none-other-than Chase Rice.

Creative Loafing reached out to Forward Hospitality Group with no response yet. When CL contacted Rice's representatives in January 2022, they could not confirm his involvement in the future of the MacDinton's space.

The buildings which house the former MacDinton’s and Ringside Cafe—as well as several other businesses on that block of downtown, including Jannus Live—are owned by Knight Enterprises.

Downtown St. Pete’s flagship MacDinton's location debuted on 1st St. N in 2011, but briefly had a second location adjacent to Jannus Live, which opened in 2015. The second MacDinton's bar and restaurant eventually turned into a Caddy’s—as hospitality group SunPubs operates both restaurants, as stated by a 2021 Business Observer article.

The only other MacDinton’s in Tampa Bay is its SOHO location at 405 S Howard Ave. in Tampa. The popular South Tampa bar has a slew of events coming up, which can be browsed on Facebook via @macdintonssoho.