Brigitte Curbelo has past violations and is named in a lawsuit about a separate arrest. 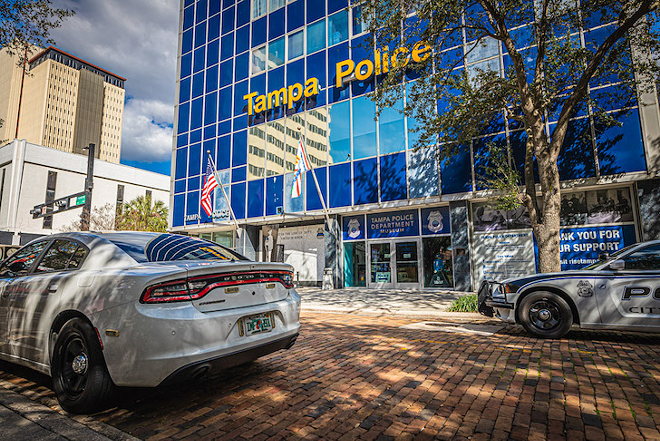 Last year, TPD officers Brigitte Curbelo and Briana Yukniewicz took a Black woman to the ground and unjustly arrested her as she worried about the safety of her fiancé during his arrest, records obtained by Creative Loafing Tampa Bay show.

Yukniewicz resigned during an Internal Affairs (IA) investigation into their behavior, and Curbelo received a three-day suspension, which she is appealing via the police union.

On July 31, 2021, Curbelo and Yukniewicz responded to a vehicle that was sitting at the intersection of Kennedy and Ashley Drive in downtown Tampa. Inside were two people, who officers believed were inebriated. They initiated a DUI check on the driver, who they say resisted as they attempted to pull him out of the vehicle.

This led to conflict with the driver, the officers said, and an altercation ensued as the officers called backup. Meanwhile, the driver's then-fiancé exited the vehicle from the passenger side. The officers received scrapes and bruises from the altercation, they claimed, and attempted to detain the driver.

The officers pinned the driver to the ground, and according to the fiancé, he complained that he couldn't breathe.

"When he stated that he couldn't breathe, I stated, 'We're not gonna have another Trayvon or a Floyd situation go on. We have two kids to go home to and they need their father,'" the passenger told a TPD IA officer during an interview. "So I was yelling that out, and that's when...they got the cuffs on him and they were proceeding to come towards me."

Officers Curbelo and Yukniewicz then "took her to the ground" TPD's IA team wrote, and charged her with resisting arrest. The officers also arrested her fiancé  for felony battery on a law enforcement officer.

The State Attorney (SAO13) told CL that no charges were sent to its office by TPD against the driver, and that it later dropped the resisting without violence charge against the woman because there was insufficient evidence to prove the criminal charges.

When he stated that he couldn't breathe, I stated, 'We're not gonna have another Trayvon or a Floyd situation go on.

Backup officer Michael Provenza, who was keeping an eye on the woman as the other officers detained the driver, told IA that she was not behaving physically aggressive toward Yukniewicz or Curbelo, and did not make any threats towards them before they rushed her.

Last year, Yukniewicz resigned during the IA investigation into the matter, and Curbelo eventually received a three-day suspension last March, along with a restriction on bidding for certain types of work shifts for two years.

This disciplinary decision came under the leadership of recently appointed police chief Mary O'Connor, selected by Mayor Jane Castor last February and approved by council in a contested March vote.

An investigation of the 2021 incident concluded that Curbelo  violated four department policies including standard of conduct, failure to comply with departmental policies, response to resistance and professional responsibility and philosophy of enforcement.

Curbelo had several departmental violations and complaints from the community before this incident, according to records and officer testimony in the IA report. Her history of violations  include breaking of rules when searching, transporting and booking prisoners, and violating department rules when using her body worn recording equipment. She received a letter of counseling from TPD for those other violations.

She is also  named in a lawsuit in which a man accused her and another officer of arresting him while having a seizure, and that he was denied medication while detained, thus resulting in him having several more seizures.

Curbelo's notice of disciplinary action says, "The recommended discipline is up to and including termination," but she's still on the force, according to TPD.

TPD did not respond when asked to explain the department's decision making on Curbelo's disciplinary action.

Despite SAO13 dropping the charges against the woman who the officers aggressively arrested, both officers told IA they did nothing wrong.

And issues regarding the right to free speech also came up during the IA investigation.

During questioning, an IA officer asked Curbelo, "Why did you tell the female to shut up when she was talking?"

"No particular reason. It just slipped," she said.

"When the female said she didn't have to be quiet, why did you reply, 'Yes, you do'?" the officer asked.

"Just in the heat of the moment," Curbelo said.

Even under arrest, free speech is protected by the First Amendment.

CL requested and paid for all information related to the case, but TPD's public information officer said the body camera video—which is referenced several times by IA officers in the investigation—was  a separate request, with a potential extra charge.

CL made a follow-up request to both TPD and SAO13 for the video. SAO 13 confirmed they are working on the request.

The victims of the officers have not yet responded for comment. CL also contacted the law firm the victims retained for their injuries, according to the files, but has not received a response at the time of publication.
© 2022 Creative Loafing Tampa Bay