The popular Indian food truck—now a brick and mortar—has been slinging its “naanwhiches” throughout The Burg’ for the past few years. 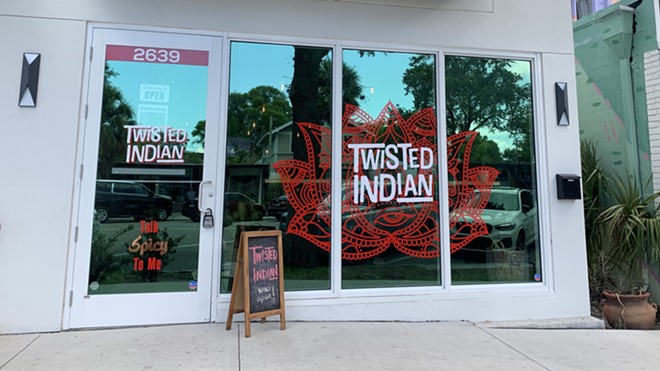 Photo by Kyla Fields
Twisted Indian at 2639 Central Ave. in St. Pete's popular Grand Central District.
Over a year after it was originally slated to debut, St. Pete’s newest restaurant Twisted Indian opened to the public for the very first time today.

Located at 2639 Central Ave. in the popular Grand Central District, Twisted Indian will be tentatively open from noon-6 p.m. from Tuesday-Sunday. Owner Lokesh Vale tells Creative Loafing Tampa Bay that once things are fully up and running, his new restaurant will most likely be open from 11 a.m.-9 p.m.— but will still remain closed on Mondays.

Twisted Indian's brick and mortar boasts the same menu as its food truck, but with some added dishes like its tofu tikka masala. Vale says that his menu will get a few more finishing touches, as guests can expect new drinks and sides like spicy lemonade and sweet potato samosas sometime in the near future.

“I would say maybe half—actually a little bit more than half—of our offerings are planted based,” Vale says. Both vegan and vegetarian markers are scattered throughout the Twisted Indian menu as well.

He describes his newly-opened restaurant as a “modern take on Indian food; not the same old menu that you’ll see at other restaurants.”

One of his favorite (and one of the most popular ) dishes is Twisted Indian’s Yogi fries smothered in black salt and various other spices, a tangy slaw, yogurt sauce, tikka masala and mozzarella cheese.

The downtown St. Pete eatery was originally slated to open in the spring of 2021, and is the first commercial tenant in its three-story Central Avenue-facing building across the street from Bandit Coffee Co..

Citing contracting issues in the delay, Vale says he and his team are just excited to finally be open in Grand Central. He’s unsure if the Twisted Indian will have an official grand opening in the future, or just naturally transition into full service.

Vale is also unsure of the future of his Twisted Indian food truck. It will remain out of commission until the end of this summer, but might start slinging naanwhiches again by the fall. The food truck’s most popular stop was at downtown St. Petersburg’s Saturday Morning Market, which will soon host its last market until October 2022.