You just don't know what you was missin' last night 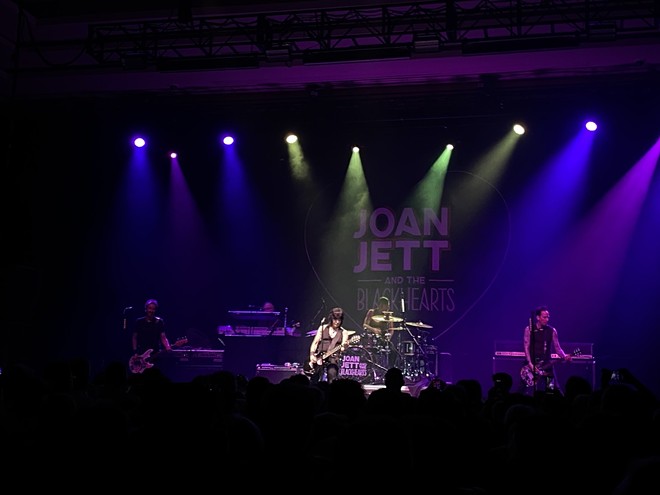 Photo by Josh Bradley
Joan Jett has never owned an acoustic guitar in her life, until recently.

“Because that’s what they said girls were allowed to play,” she explained, while introducing an acoustic set of an encore Sunday night at Tampa’s Seminole Hard Rock Events Center.

The Queen of Rock and Roll last visited Tampa Bay for a much shorter gig opening Heart’s reunion—and possible final—tour three years ago, across the street at the MidFlorida Credit Union Amphitheatre. As for Jett's Sunday night return, heart-stopping is a bit too strong to describe the 90-minute set, but as you’ve known for over 40 years, she doesn’t give a damn about her reputation. And her fans don’t either. She pioneered a female domination of a genre of music usually lead by men, so not every night has to be an utter spectacle.

A little after 8 p.m., the lights went down above the mostly GA pit crowd—along with those seated behind—and over the intercom, “Last Night,” an instrumental by The Mar-Keys, blared while Joan and the Blackhearts circa 2022 jogged onstage.

“Victim of Circumstance” kicked things off, with Joan wielding a creme-colored Gibson Melody Maker. It’s no secret that she’s a Gibson girl in every sense of the word, having used Melody Makers since her days with The Runaways, which she would salute on her second song. There wasn’t a voice in the room that didn’t yell back the titular lyric of "Cherry Bomb" during its chorus, except for Joan’s, who sat that part out the first few times.

“Do You Wanna Touch Me” was the best fist-pumper of the evening, and like on the “Cherry Bomb” refrain, there wasn’t a single attendee who wasn’t screaming “yeah, oh yeah," per Joan and the band’s physical instructions (part of me wonders how many people in the damn-near sold out crowd know about its insanely problematic writer, Gary Glitter; it was a hit on Joan’s end, so maybe in this case, love the song, hate the writer).

Jett sounded a bit tired on “Bad Reputation,” though. Not in the sense of sleepiness, but more in an “ugh, this song again” fashion.

Face it: As revolutionary—and still relevant—of a figure Joan Jett is and always will be, she’s a nostalgia act. Her new Changeup album is entirely made up of her greatest hits, re-recorded acoustically. Not that it’s a crapshoot or anything, but it’s been almost a decade since Unvarnished, Joan’s last album of brand new material. And truthfully, some songs are better off electric. That doesn’t mean that others can’t thrive in either format, though.

Joan recalled starring in “Light Of Day” opposite Michael J. Fox in 1987, and would go on to perform the film’s titular anthem, originally written by Bruce Springsteen. It wasn’t an acoustic performance, but you couldn’t help but wonder how it would sound in a non-electric setting. About half the crowd might agree that just about any Springsteen-penned tune would sound majestic, no matter how many watts were behind it. Members of the other half probably weren’t too happy to hear that Joan affiliated herself with that senile, America-hating commie, and took the opportunity to take a restroom-or beer—break.

A new co-narrator for Jett came about shortly after. Keyboardist Kenny Laguna—the only original Blackheart still onstage—was tucked away on the top riser of stage right, and began reminiscing about his first few years working with Jett. Most of Laguna's banter was centered around how his future boss’ ambition amazed him, and how nobody believed that she’d ever be the frontwoman of a band of all guys, to which many booed.

“When you’re doing good, everyone in entertainment is your friend. When you’re not doing good, you have no friends,” Laguna explained, introducing anthem-for-the-lonely “Fake Friends.”

“They’re everywhere, not just with me. You guys, too.” Jett warned afterwards. “Watch your ass.”

The Replacements’ “Androgynous,” a tune that she “really loves” came next. Later, lead guitarist Dougie Needles ripped out some Townshend windmills on “Love Is Pain,” and on Sly and the Family Stone’s “Everyday People,” Joan may have actually done that lead guitar solo on a black Melody Maker, with a pink heart decal pasted on.

After “Long Time,” which saw Joan crack out what looked like a Gibson SG Original, three obligatory hits ended the electric set: Radio favorite “I Love Rock and Roll,” followed by “Crimson and Clover,” with its final movement being in the same key as Tommy James and the Shondells’ original recording, and “I Hate Myself For Loving You,” which was nothing short of a powerful ending.

Unfortunately, Jett and the guys’ acoustic encore set—featuring “I’m Gonna Run Away,” “Fresh Start,” and a “Cherry Bomb” reprise—was off-putting for many, and caused about an eighth of the general admission standing area to eject the performance space, mid-song.

“It’s a change, but it’s a fun change, you know?” Joan assured us. Even Kenny Laguna wasn’t that into it, having been caught on his phone by Joan, during a song. “Busted! On the phone during a gig!” Joan joked.

He tried defending himself while introducing “Fresh Start,” but Joan apparently couldn’t understand a word he was saying. “Are you vaping back there?” she asked him.

People in the crowd were doing it, so why not?
© 2022 Creative Loafing Tampa Bay