'You would never, ever in your wildest dreams hire these people.' 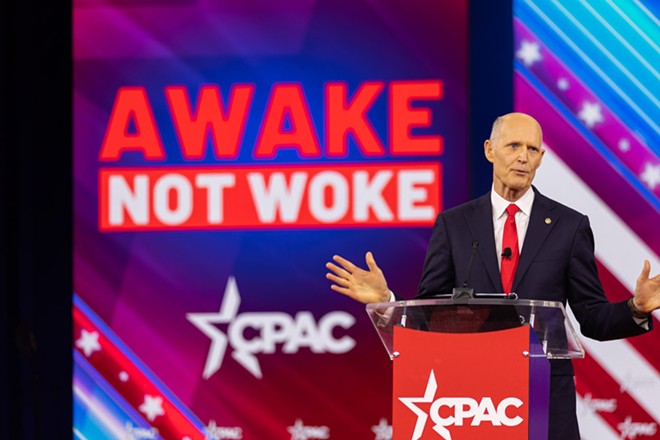 Photo by Dave Decker
Rick Scott at CPAC 2022 in Orlando.
Sen. Rick Scott said Thursday that the problem with President Joe Biden’s White House stems in part from the “incompetent people” he’s appointed to the Cabinet.

“If you look at their nominees, what have they accomplished?”

“I was a business guy, and I watched competitors who would surround themselves with incompetent people in their leadership team. That’s exactly what Biden has done,” Scott told interviewer Bill Hemmer.

“So he’s got a bunch of people who work with him who have actually never accomplished anything,” Scott continued. “Maybe they’ve done some mean tweets and that’s about it.”

Scott’s read contravenes the conventional wisdom on the Biden Cabinet, depicted in a post-election Associated Press analysis as a collection of experienced careerists, many with experience in the Barack Obama White House. Pressed on his contrarianism by Hemmer, Scott persisted.

“If you look at their nominees, what have they accomplished? As a business guy, I don’t say, ‘Did you give a good speech?’ or ‘Did you do a good tweet?’ I say, ‘Tell me your background and what you’ve accomplished in your life.'”

Scott went on to press his grievances. He said Secretary Granholm, a former Governor of Michigan, has “no idea” how to get energy prices down. Buttigieg, a former Mayor of South Bend, Indiana, had “no answer” to Scott’s supply chain questions. And Raimondo, a former Governor of Rhode Island, said inflation was the fault of the Federal Reserve, per Scott.

Scott has pressed the case that the Biden administration is full of incompetent people before, singling out the Vice President with rhetoric similar to that on offer Thursday in a fiery denunciation last year.

During another appearance on Fox News, Scott compared Kamala Harris to an “arsonist” in charge of fire prevention, offering a visceral critique that got called into question by a normally friendly interviewer.

“What has she ever accomplished? And by the way, putting Kamala Harris in charge of the border is like asking an arsonist to put out a fire, like asking (former New York Gov.) Andrew Cuomo to be in charge of a sexual harassment seminar,” Scott joked.

“I mean, she is not going to accomplish anything. I mean, not going to the border? Go to the border,” Scott said, before host Sandra Smith reminded Scott that the Vice President of the United States and former U.S. Senator had a resume of considerable accomplishment.
© 2022 Creative Loafing Tampa Bay