Legislators want to stabilize Florida's property insurance crisis, but it may not be enough

“We are being tone deaf, I believe, to what is really going on out in our communities.” 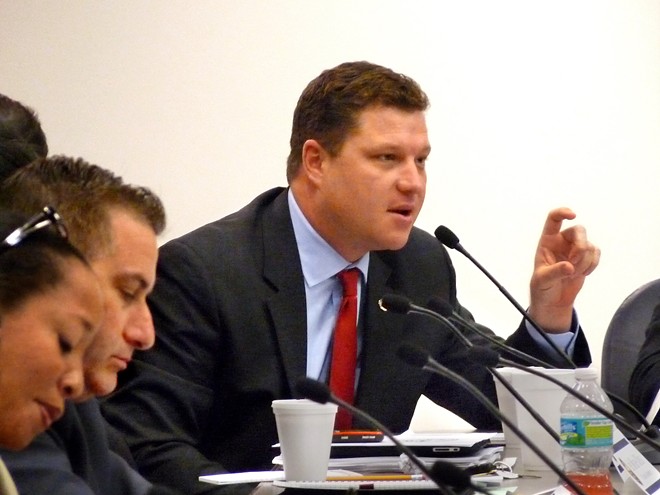 Senate Banking and Insurance Chairman Jim Boyd, a Bradenton Republican who is sponsoring the bill, said he would like to see lower costs in the short term for homeowners. But he said the focus is to make sure coverage remains available.

“We are right now trying to stabilize the market, and I think that is our job,” Boyd said.

The committee voted 19-2 to approve the bill, but some members said it should do more to provide relief to homeowners — or wouldn’t do enough to shore up the industry.

“We are being tone deaf, I believe, to what is really going on out in our communities,” Sen. Randolph Bracy, D-Ocoee, said.

But Sen. Jeff Brandes, R-St. Petersburg, compared conditions in the industry to having “Stage 4 cancer and failing.” He said the proposals in the bill were like treating “Stage 1 cancer.”

Senate and House leaders and Gov. Ron DeSantis’ administration reached agreement on the proposal before it was released Friday night. While the Senate convened Monday, the House will come into session Tuesday.

The Senate and House were not able to reach agreement on a property-insurance bill during the regular legislative session, which ended in March. But problems have continued to mount in the insurance market, with three carriers — Lighthouse Property Insurance Corp., Avatar Property & Casualty Insurance Co. and St. Johns Insurance Co. — being declared insolvent and placed into receivership since February.

The bill deals with multiple issues, but much of the discussion focused Monday on changes that would affect roof-damage claims, reinsurance and lawsuits.

Insurers in recent years have blamed questionable, if not fraudulent, roof-damage claims for driving up costs and spurring large amounts of litigation.

Deductibles would not be charged on such things as hurricane damage or situations in which trees fall and puncture roofs. But Sen. Bobby Powell, D-West Palm Beach, questioned whether many homeowners could afford the deductibles if they have roof damage.

“Is there a way we could make that more digestible for consumers?” Powell asked.

Another part of the bill, however, would place a restriction on insurers that refuse to write or renew policies because of the ages of roofs. The companies could not refuse to provide coverage to homes with roofs that are less than 15 years old if the decisions are based solely on the ages of the roofs.

Boyd said that, in many cases, roofs do not have anything wrong around 15 years. But Brandes opposed the restriction, saying insurers have placed age limits on roofs because roof-damage claims and lawsuits are helping fuel financial losses.

“It’s frankly been the only mechanism they have,” Brandes said.

Another key issue in the industry is reinsurance, which is backup coverage that insurers purchase each year. Many need to have reinsurance contracts in place by June 1 but are struggling to find or afford coverage.

The bill would offer as much as $2 billion in state money to provide a short-term fix. Insurers have long been required to purchase certain amounts of coverage through the Florida Hurricane Catastrophe Fund, a state program that provides relatively cheap reinsurance.

Under the bill, the $2 billion would provide another “layer” of reinsurance to insurers that otherwise might not be able to buy it in the private market. Also, the bill calls for savings under that part of the bill to be passed along to ratepayers.

The bill also would take a series of steps to try to reduce litigation costs. As an example, it would make it harder for attorneys who represent homeowners to get what are known as “contingency fee multipliers” — which can substantially increase what attorneys are paid.

Sen. Darryl Rouson, a St. Petersburg Democrat who is an attorney, questioned whether the contingency-fee multiplier proposal could make it harder for homeowners to find lawyers to handle complex cases. Rouson and Sen. Audrey Gibson, D-Jacksonville, cast the only dissenting votes against the bill.

But Boyd, an insurance agent, downplayed concerns about homeowners not being able to find attorneys to take cases.

“There doesn’t seem to be a shortage of attorneys to file these claims on the homeowners’ behalf,” Boyd said.
© 2022 Creative Loafing Tampa Bay