Trump beats DeSantis in the poll, too. 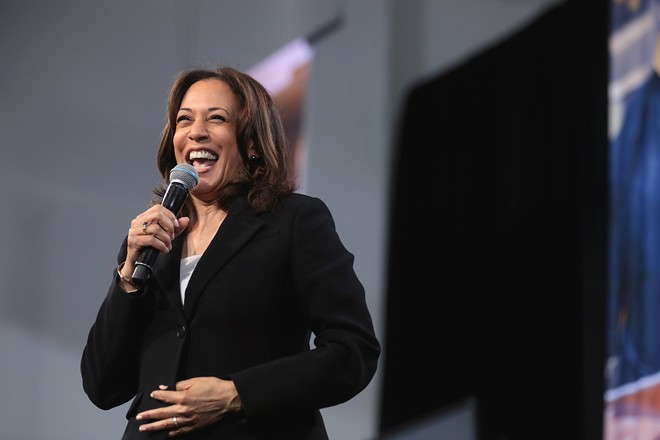 Gage Skidmore from Peoria, AZ, United States of America / CC BY-SA (https://creativecommons.org/licenses/by-sa/2.0)
U.S. Senator Kamala Harris speaking with attendees at the 2019 National Forum on Wages and Working People hosted by the Center for the American Progress Action Fund and the SEIU at the Enclave in Las Vegas, Nevada.
A new survey testing Florida Governor Ron DeSantis versus Vice President Kamala Harris in a 2024 Presidential Election shows the Democrat slightly ahead of the rising Republican star.

A Harvard/Harris Poll shows Harris the choice of 41% of respondents, with DeSantis at 38% and 20% undecided.

This result is similar to other competitive matchups between DeSantis and Harris tested by the same pollster.

In the current survey, DeSantis underperformed former President Donald Trump, the choice of 47% against Harris in a hypothetical 2024 faceoff, 7 points above the Vice President.

Just as in previous iterations of this poll and various others, the 2024 GOP horse race was tracked. Trump was the first choice of Republicans with DeSantis in second.

Trump was the choice of 41% of respondents, with DeSantis’ 12% good for a distant second. In a field including Trump and DeSantis last month, the former President drew 58% support among Republican registered voters, 45 points ahead of the Florida Governor.

DeSantis was the winner of a non-Trump field, carrying 25% of support from Republican leaners, 10% ahead of former Vice President Mike Pence. In third place with 9% was Texas Sen. Ted Cruz. Ambassador Nikki Haley had 5%, good for fourth place ahead of Sen. Marco Rubio, who had 3% support in the non-Trump field.

While some surveys of the race show DeSantis more competitive against Trump and more dominant without him, straw polls tell an even more tantalizing story for those seeking a changing of the guard. A straw poll of activists at the Wisconsin state Republican convention showed DeSantis ahead of Trump last weekend. And a straw poll of Jacksonville voters showed the same result.

DeSantis, of course, continues to say he’s not interested in running for President in 2024, even as pollsters continue to test the question.

The poll was conducted on May 18 and 19 and surveyed 1,963 registered voters.