By Kelly Hayes and Florida Politics 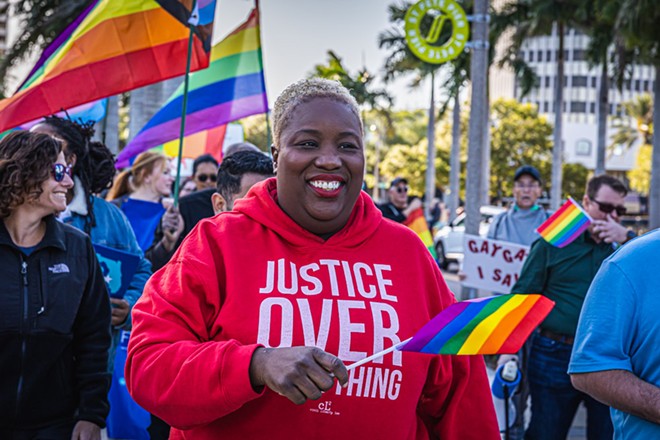 Photo by Dave Decker
Michelle Rayner marches in St. Petersburg, Florida on March 12, 2022.
A slate of Hillsborough County elected officials have announced their endorsement of Rep. Michele Rayner for re-election in the state House.

Included in the list of endorsers is Tampa Mayor Jane Castor, who has led the city since 2019. Both Castor and Rayner have broken barriers for the LGBTQ community. Castor became Tampa’s first openly gay Mayor upon her election, and Rayner is the first openly gay Black woman to serve in the Legislature.

“I’m excited to endorse Michele Rayner for her re-election to the Florida State House,” Castor said in a statement. “She has a record of using her platform and voice for those who need it the most including our LGBTQ+ families, workers, tenants, and small businesses. As the only LGBT Black woman in the Florida Legislature, her voice is invaluable and critically needed to ensure that all families are represented.”

State Attorney Andrew Warren joined Castor in endorsing Rayner. Warren, who has served as State Attorney since 2016, is a progressive leader in Tampa Bay. Since his initial election, he has implemented a series of criminal justice reforms.

“Michele Rayner is a proven leader for our community,” Warren said in a statement. “Together we have fought for crime victims, supported programs that keep kids safe, and promoted smart criminal justice reforms. Michele shares my vision for a fair criminal justice system that invests resources prosecuting violent felons and steers low-level offenders away from crime. Michele Rayner is the reliable advocate we need in Tallahassee. Please join me in supporting Michele Rayner for State Representative District 62.”

“I am supporting Michele Rayner in her re-election campaign to the Florida State House because she is an advocate for local governments and the people we serve,” Overman said in a statement.

“Michele has used her platform to amplify the voices of our communities and pass legislation to address food insecurity and create jobs. Florida families and individuals need the people that they elected to be advocates and to solve problems, especially now. Michele has a record of doing just that and Hillsborough County residents will benefit from her invaluable representation.”

“I have always carried and will continue to carry the people’s voice,” Rayner said in a statement. “I am grateful to have the support of Hillsborough County leaders from every sector of our local government.

Rayner recently suspended her congressional bid due to a controversial redistricting plan which turned Florida’s 13th Congressional District from purple to a light shade of red. The new district extends further north into traditionally red parts of Pinellas County and eliminates parts of St. Petersburg, the currently drawn district’s largest city and a Democratic stronghold.

Rayner currently represents House District 70, which covers parts of Hillsborough, Pinellas and Manatee counties. With the new maps, she’ll be running in House District 62, pitting her against former Democratic Rep. Wengay Newton in the Primary.

Newton held the HD 70 seat before Rayner. He ran an unsuccessful campaign for Mayor of St. Pete in 2021, pitting him against Welch in the Primary. But Rayner is bringing in a hefty war chest from her congressional race. Newton’s campaign has raised just under $28,000, while Rayner’s has more than $220,000 in cash on hand.

Rayner is a civil rights lawyer and social justice advocate who previously served as an Assistant Public Defender, legislative aide and counsel for the local NAACP Legal Defense Fund.