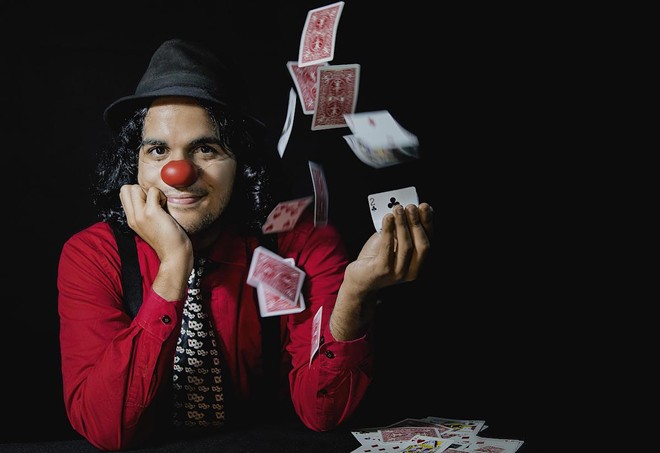 Photo by Clau Silva
Coming all the way from Brazil, 'El Diablo of the Cards' is traveling 52 countries thrilling audiences with a card magic style that combines improvisation and clown’s madness.
While much of the world may seem bleak right now, one Tampa festival is setting out to bring the city some artful harmony next month.

Tampa’s Fringe Festival is gearing up to celebrate its sixth anniversary with nearly 100 shows from 23 companies and a new and improved Kids Fringe–all embracing this year’s theme “Peace. Love. Fringe!”

Attendees can purchase tickets for each show or group passes: three shows, five shows or an all-access Eliminator Pass.

Tampa’s Fringe offers the Bay Area a platform where local and emerging artists and creatives can share their work and afford to take artistic risks. These festivals originated in Scotland in the ‘40s when local artists rebelled against curated art festivals by putting on their own events, coining the term “fringe” festival. Today, Tampa’s own event represents expanded perspectives and a supportive, celebratory environment.

Photo by JenBen Media
In 'Tithonia: A Lesbian Space Odyssey,' two crew members' survival skills and budding relationship are put to the ultimate test as they traverse the galaxy aboard the Starship Tithonia.
Some local favorite performances will include “Cannonball Cabaret,” “Strange Girls,” Oh Gasparella!” and more. If you’re not sure which shows are for you, attend the free preview shows July 27-Aug. 3 in Hillsborough Community College’s Rehearsal Hall, located off Palm Avenue in between 15th Street and N Avenida Republica de Cuba.

Also notable is a Brazilian export "El Diablo of the Cards" and a lesbian space opera called "Tithonia."

The Kids Fringe will take place Saturdays and Sundays from 11:30 a.m.-2:30 p.m. during the festival. Kid Fringe attendees can look forward to two performances of “A Goofy Musical,” four performances of “After Happily Ever After,” storytelling shows of “Puff! The Magic Dragon” and arts and crafts. These shows are free for children and $10 for adults.

More information about the event, shows and tickets can be found at tampafringe.org.

More information about the event, shows and tickets can be found at tampafringe.org.
© 2022 Creative Loafing Tampa Bay