Disney World's new MagicBand+ will debut next week. Here's what they do

This new wearable technology will offer an array of new amenities compared to the  previous MagicBand. 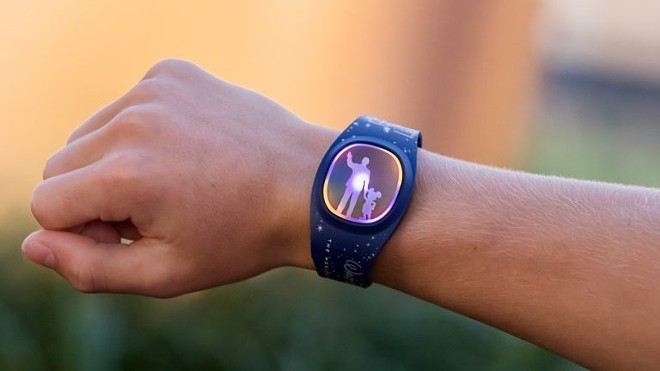 Photo via Disney
One of the new MagicBand+ designs. The new bands will include lighting effects, haptic vibrations, and gesture recognition.
Disney's all-new MagicBand+ will have its official (and presumably magical) debut on July 27th at Walt Disney World Resort.

This new wearable technology will offer an array of new amenities compared to the  previous MagicBand.

As a part of Walt Disney World's 50th Anniversary, guests can embark on an adventure with Tinker Bell to bring the 50 gold character sculptures back to life throughout the four theme parks.

The MagicBand+ will also allow Star Wars fans to become a bounty hunter. Disney has incorporated Vibrations will help guests to find virtual bounties throughout Star Wars: Galaxy Edge and feature a heat gun within the Disney play app to find hidden bounties within the park.

Guests will also be able to enjoy a magical fireworks experience in both "Disney Enchantment" at Magic Kingdom and "Harmonious" at EPCOT. The interactive band will be complement the visual and music of the shows  through vibrations and colorful lights, and music.

Disney first announced the MagicBand in 2013 to offer a more convenient theme park experience. Guests were able to  link their credit  cards, park passes as well as fast passes to facilitate their day.  However,  Disney has shift their focus to offering not only convenience but interaction.

The MagicBand+ will be rechargeable  (unlike its older generation) , and it  will have more than 25 different designs at select stores across Walt Disney World and on the website.  Prices start at $34.99.