The campaign is meant to mock a controversial new Texas law requiring schools to post 'In God We Trust' posters if they're donated. 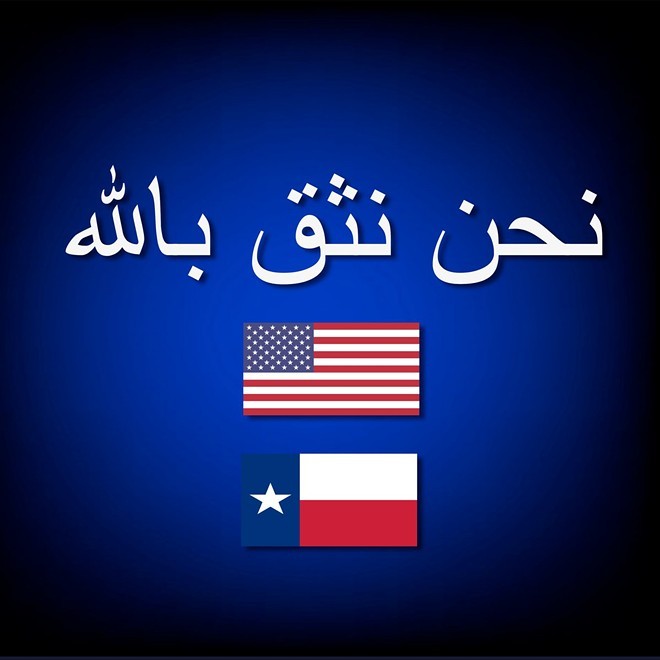 Twitter / Chaz Stevens
Chaz Stevens, an advocate for the separation of church and state, has already ordered 50 signs similar to the one above to donate to public schools in Texas.
A Florida activist wants to mess with Texas and SB 797, the state's controversial new law requiring schools to display do nated “In God We Trust” posters.

Chaz Stevens, an advocate for the separation of church and state, is donating signs to Lone Star State public schools with "In God We Trust" written in Arabic. Best known for erecting Festivus poles in the Florida State Capitol to counter nativity scenes, Stevens' poster campaign is intended to tweak Texas' Republican leaders for requiring public schools to display posters emblazoned with the motto.


We really could use your help in our quest to battle Texas' latest law - "In God We Trust" signs in public schools.

Our project will send hundreds of these posters across the Lone Star state.

We really need your help. Stand with us today!https://t.co/MwoIT6RVNJ pic.twitter.com/SNkc0SkkQf

According to S.B. 797, the posters must have the phrase "In God We Trust" accompanied by an American flag directly underneath the words in the center of the sign. A Texas flag must also appear somewhere on the banner, and the posters must be donated by outside organizations not receiving tax-dollar funding.

However, the law doesn't specify the language the motto must be printed in, Stevens argues.

According to a blog posted on OnlySky Media, Stevens has already placed orders for 50 signs written in Arabic and has contacted Carroll Senior High School in the North Texas suburb of Southlake about donating one of the signs to the school.

Those interested in joining Stevens' crusade against S.B. 797 can donate to his GoFundMe dubbed "Messing with Texas." It's raised $8,560 since Monday.

"Democracy is under attack, and the first step towards restoring it is simple — we need you," the GoFundMe says.