Getting coffee with everyone's favorite Tampeño.

Photo by Ray Roa/Design by Joe Frontel
The cover of the Sept. 1, 2022 issue of Creative Loafing Tampa Bay.
The hiss of an espresso machine steaming milk, and the crunch of Cuban toast. The sight of glass cases piled high with guava pastries, and the cackle of tables surrounded by abuelas and abuelos engaged in lively conversation. The hustle of workers from across the spectrum of Latin American countries making it all happen with ease. These are familiar sensations to any self-respecting Tampeño, so it’s no surprise to find the king of them surrounded by them on a Monday morning as he sits with café con leche in hand.

But Mario Núñez is not at La Teresita or even La Segunda.

All of this is happening at a north Tampa strip mall, inside Cafe Caribe which says it has the best Cuban sandwich in Carrollwood. The claim isn’t far from the truth. If you imported late La Gaceta publisher Roland Manteiga’s famous wooden table and red telephone, you’d get pretty close to the vibe at Ybor City’s since-shuttered La Tropicana Cafe.

The 63-year-old American Airlines retiree also unsurprisingly knows a bunch of people inside the cafe—hell, Atlanta Rhythm Section founder Rodney Justo bought him the coffee. Núñez seemingly knows everything about Justo. His knowledge of Tampa also more or less includes anything you’d want to know about this waterside city first inhabited by the Tocobaga before being built up on tobacco and the gilded age ambition of Henry B. Plant.

“When people left Ybor City in the ‘60s and ‘70s, after the interstate was built and our city was cleaved in two, the younger generation was being born and they didn’t want to be in the cigar industry, which was failing by that point,” he says, detailing how Cafe Caribe landed in the ‘burbs. “They wanted to leave the city, and they went to the newest subdivisions being built, but they brought a lot of that juju with them.”

This month, Núñez and his own juju celebrate the 11th anniversary of his Best of the Bay-winning television program, “The Tampa Natives Show,” which airs on Tampa Bay Arts & Education Network, a government station that has served Tampa for nearly four decades. 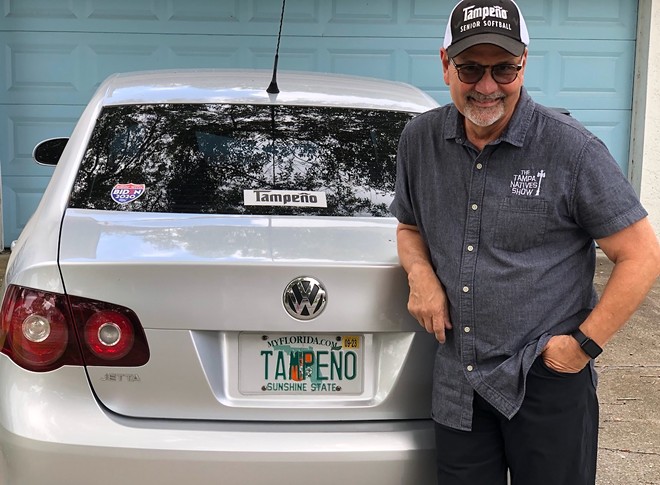 Photo c/o Mario Núñez
They don't put tildes on state license plates, so Mario Núñez took care of that.
The show grew out of a Facebook group started by former “Tampa Natives” co-host Steve Cannella. Núñez—a Jefferson High School grad whose older brothers played baseball at Plant—tapes an episode or two on most Thursdays, and the results air on the show’s social media page, plus again on Spectrum and Frontier twice a week; episodes live in perpetuity at YouTube and tbae.net. At the core of the program is a deep love for Tampa and a nostalgic lust for the area. Put simply, it's hours and hours of fantastic storytelling.

Núñez’s love affair with the city started at the old St. Joseph’s Hospital near downtown where he was born on Sept. 20, 1958. Mom was a paralegal who spent time in the office of Senator Louis A. de la Parte Jr.; dad was a hall of fame waiter at Columbia Restaurant but retired as a mailman as a part of the Hillsborough County School System. They were busy parents, so they quickly went back to work after he was born.
“Thank goodness my grandmother lived two blocks down the same street,” he explains, detailing parts of his childhood neighborhood, Broadmoor Park, where Lois Avenue nearly intersects with W Cass Street. The neighborhood is now called North Bon Air, a change that happened while he was in Texas working as a flight attendant—and one he definitely would've pushed back against.

Maria Delgado was 48 years old when her grandson arrived. Núñez says she had nothing else to do but take care of the new baby, which was bad news for the rest of the world. “By the time I was four years old, I knew that that moon came out every night just to say hello to me,” he jokes, alluding to the love she wrapped around him.

Delgado (his Puerto Rican grandma, the other was a Cuban Tampeña) always told him to make the most of every opportunity. “You know, in so many words she would tell me in Spanish, ‘Mijo, apply yourself, do your best,' and, 'This ain’t no dress rehearsal. Whatever you do, do it well,’” Núñez adds.

So he was always wide-eyed on the public bus grandma started taking him on when he was four years old. Together, hand in hand, they walked six blocks to the stop. He’d watch the coins disappear into the box and take the ride. “It seemed like forever to get downtown, but it was really 10 minutes,” he laughs.

At every turn, he’d ask abuela if it was time to pull the cord indicating a stop request.
Núñez can still hear the loud buzz and feel the sensation of finally getting to pull it, and he fondly recalls grandma giving him a nickel so he could go to Woolworth and buy an envelope of cashews off the Lazy Susan spinning underneath the 100-watt incandescent bulb that kept the nuts warm. “Those are some of my memories. They’re stuck there, and thank God they’re stuck there because those are my touchstones,” he says.

Those touchstones are exactly what he tries to share with viewers—and bring out of the guests who come on his show.

And when asked to look towards the future and speculate on what Tampa needs to stay Tampeño, Núñez—who’s active in local politics, but keeps them off the show aside from visits by elected officials—doesn’t immediately go to affordable housing, policy reform or even Bayshore's damn Christopher Columbus statue. Instead, he keeps it relatively simple and points to two things.

One is the word “Tampeño,” his preferred term for someone from Tampa. “Tampan” is off the table for Núñez, and while “Tampanian” is somewhat acceptable, he prefers the flair and warmth lent by the tilde (“ñ”). 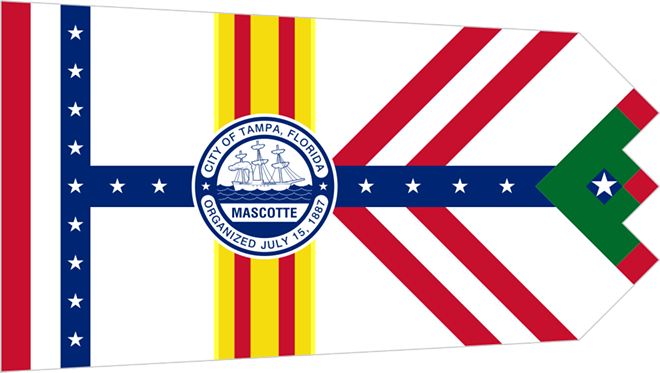 Dyfsunctional at English Wikipedia, Public domain, via Wikimedia Commons
One of Mario Núnnez's hopes is that the City of Tampa adopts a new flag.
His other hope, no secret to local vexillologists, is that the City of Tampa adopt a new flag. Núñez swears by the Roman Mars TED talk about municipal flags and says Tampa’s could use an overhaul. In the same week we wait for the first launch in NASA’s new Artemis mission to the moon, he invokes Neil Armstrong.

“What’s the first thing we did when we got to the moon? Before we struck a golf ball, we stuck a flag in the ground,” Núñez exclaims. “If you want to have a rallying point for your people, it has to be the flag. If you’re going to be a great city in this new time, you need a great flag.”

It’s a controversial topic, and Núñez can talk circles around it, but it all boils down to identity. And when it comes to conversations about a sense of place—whether you’re in West Tampa or in the booth of a Carrollwood cafe that feels like Ybor City—sharing space and cafe con leche with Núñez is one the best places to be.
© 2022 Creative Loafing Tampa Bay