The Hard Rock show had been on the books for almost three years. 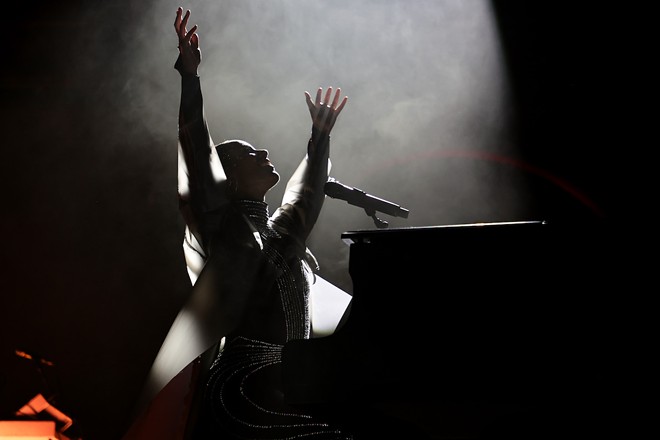 Photo by Theo Wargo/Getty c/o Alicia Keys/Full Coverage
Alicia Keys plays Charlotte, North Carolina on Aug. 2, 2022.
There’s a misconception that Alicia Keys’ instrument is the piano, but it’s not unwarranted. When “Fallin’” landed 21 years ago, the video showed a then relatively unknown 20-year-old phenom in a living room behind a baby grand, plinking out that now iconic riff and working through a chorus that was ubiquitous in the summer of 2001.

Eight albums and 15 Grammys later, let the record show that while Keys is certainly a prodigy on the ivory, the now 41-year-old’s main instrument has always been an unrivaled vocal and ineffably ebullient spirit that no one will likely ever match for as long as there is life on earth.

Clad in a sequined one-piece on Sunday night, Keys and a five-piece band (keys, bass, guitar, drums, backup vocals) shared their gifts with a sold-out Hard Rock Event Center that was treated to an intimate, 25-song set as part of a show that’s been on the books for nearly three years.

“I’m so happy to see you tonight,” Keys smiled after a yearning, harmony-soaked run through “Diary” driven by its fast-moving chord progression and key changes. “My family is here tonight, so this is special—and you are all my family tonight.”

Photo by Ray Roa
Alicia Keys plays Hard Rock Event Center at Seminole Hard Rock Hotel & Casino in Tampa, Florida on Sept. 17, 2022.
She then went on to bring 1,421 fans deep into the Keys universe, as she introduced her MPC machine (Akai MPC3000?), which she’s not only long-used to produce and demo songs, but pushed front and center on “Unlocked” versions of songs from her latest outing, Keys. In between snippets of both “unlocked” and “original” versions from the 2021 album, she playfully interspersed a reggaeton horn and asked audience members to voice their preferences (“unlocked” was the unanimous preference on two, and the crowd tied on another).

The suite was a lighthearted way to move through a trio of songs—with some big Moog sounds snuck into a run through her DJ Khaled collab “Nobody”—but also a subtle showcase of the ease with which she weaves between a falsetto and natural smoky timbre, plus how she’s able to just live within songs in an unabashedly joyus, and completely infectious, way. And when the deep bass and house music beats from the MPC hit on “unlocked” versions of “Skydive” and “Only You,” the crowd was more than ready to rave.

The party continued in a medley that waded into her 2004 hit with Usher, “My Boo." Then, a set that featured so many high points came to its first crescendo when “City of Gods (Part II)” melted into “Empire State of Mind” where a room full of Tampénos sang loud enough to make you believe they all grew up in one of the five boroughs. Artists on Keys’ level are often lauded for tours where they make football stadiums feel like theaters, but Keys did the inverse on Sunday and made it feel like there were 20,000 people packed into the ballroom situated poolside at the Seminole Hard Rock Hotel & Casino.

Until the very end, before a smoky set-closing performance of “If I Ain’t Got You,” Keys seemed to never break a sweat either. Whether she was dancing through half-time dance breaks (“In Common”) or making a 21-year-old song feel brand new (“Fallin’”), it was a wonder to watch her just command the piano (the left hand was monstrous on “Unbreakable”), interact with the crowd (“Wasted Energy”) and just be present and smiling huge without an ounce pretense.

At one point in the 90-minute set, a big singalong for “Girl On Fire,” ended, and Keys moved into “Superwoman.” On Sunday, even more than it does on 2017’s As I Am, the song filled the room with warmth. It was the same, stress-free, let-me-be-me, vibe on “A Woman’s Worth,” where Keys led another anthem for a room ready to surrender and just sing.

When it comes to artists of our generation, no one, no one, will ever come close to Keys. Still, for at least one night in Tampa—after almost three years of waiting—she invited her family to join the chorus and feel unbreakable, too.