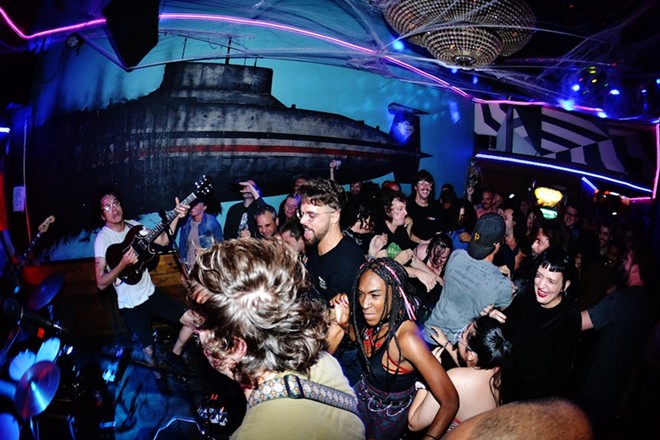 Photo by Xebulon Emmz
Frankie & the Witch Fingers plays The Bends in St. Petersburg, Florida on Oct. 18, 2019.
Dive bars aren’t hard to come by in St. Pete, but a select few have their own unique strain of patrons who help turn watering holes into whole worlds within themselves.
The Bends, now in its 10th year, has earned its rank as a true institution of the Sunshine City.

Not many changes have been made since the bar opened at 919 1st Ave. N in fall of 2012. The handsome portrait of '80s beefcake Tom Selleck that guards its service area, and the Licensed to Ill-themed mural in the back room have held up well against the years of cigarette smoke and late night debauchery. There’s no signage anywhere. Instead, a large cartoon finger points at the front door beckoning folks to enter the narrow, dimly-lit space. Inside, bar goers are typically met with the echoing thud of a kick drum and maybe an ex or two they’d hoped to avoid.

On Saturday, the beloved dive celebrates a decade downtown by doing what it does best: hosting a stacked live show and slinging stiff drinks.
There’s something that’s so quintessentially St. Pete about this small bar that's been making regulars out of folks from all walks of life—one of the reasons that co-owner and St. Pete native Matt Kaye opened the bar in the first place. After scraping together enough money, he and his partners decided to open a watering hole and underground venue on the “outskirts of town,” which is now the condo-filled EDGE District.

“We knew we wanted to be part late-night venue and part dance club while offering creative and affordable cocktails. A key element we really wanted to have was just having the kindest and most fun bar staff,” Kaye tells Creative Loafing Tampa Bay. “Ultimately, The Bends is a representation of its owners' experiences, lives, travel and a specific time period.”

Before moving back to St. Pete and opening The Bends in 2012, Kaye and his now-wife, Victoria, lived in New York City where they went to school, tended bar, and completely immersed themselves in the culture and nightlife. Although Kaye has swapped his debaucherous late nights for the more domestic life of a father and husband, the legacy of The Bends’ good drinks, live music and gnarly mosh pits lives on.

His most recent endeavor, the beloved restaurant and cocktail bar Wild Child, is more of a reflection of 2022 Matt Kaye, while The Bends represents the 2012 version of himself. “Wild Child allows my whole family to experience what I do and also has given me the opportunity to work with a whole new amazing crew of hardworking, gifted individuals,” he adds.

The Bends team—the Kayes, Craig Dragoonis, Chris Stone and Jason Mcnally, in addition to about a dozen bartenders and other staff—is a close-knit group of folks dedicated to preserving the unique atmosphere of the “classy dive.” “Really the bar itself is all of the people involved, all of the friendships made and shared experiences together,” Kaye tells CL. “We always try to provide a creative safe space for the adventurous underground of St.Pete to imbibe with delicious cocktails and ruckus good times.”

Although the interior of The Bends actually hasn’t changed much, small details have culminated over the years, turning the bar into something unique. The colorful string lights lining the bar’s ceiling have come and gone, there’s a steady rotation of old games in the back room and an ever-changing bathroom mural serves as the background of hundreds of drunken bathroom selfies that get immortalized by the Instagram page @bendsbathroom.

Having earned its stripes as an unassuming St. Pete institution alongside other dives like Mastry’s, The Emerald and the recently-shuttered Wilson’s, perhaps the most unique aspect of The Bends is its focus on highlighting local creatives, whether via a concert or visual artist showcase. From rap, hip-hop and indie rock to punk, hardcore and electronic—you can find local musicians performing in the back room on any given weekend (and some weeknights, too.) 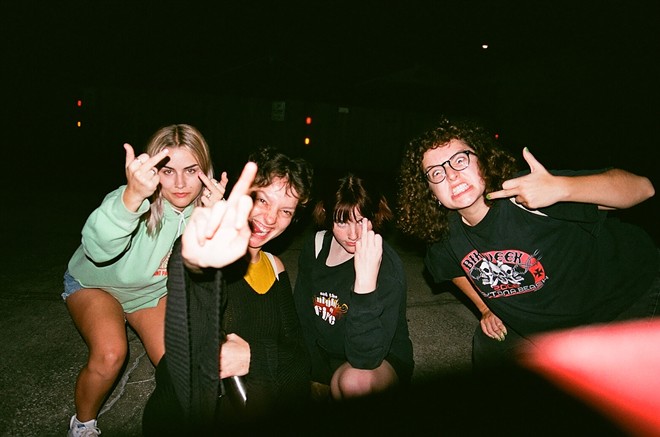 Cassidy Altieri
All-girl indie band Spoiled Rat is part of The Bends 10-year anniversary show on Sept. 24, 2022.
For the 10-year anniversary this weekend, a newly-formed DIY booking duo brings an absolutely stacked lineup to the back room. All-girl indie band Spoiled Rat, rock trio Charlie, internationally-acclaimed experimental rap duo They Hate Change and solo indie artist Fessi K will certainly set the standard for future gigs booked by We’re Sweet Girls. The party starts at 8 p.m., but the Girls say they won’t release any set times, as folks should give every act on the bill their time of day—a theme that can be expected from upcoming shows as well.Each artist on the bill will receive the same amount of performance time, too, eliminating the barriers between openers and headliners.

Twenty-two year-old Summer Strickland, one-fourth of Spoiled Rat, and 26-year-old Zoe Robinson, who makes music under the moniker Fessi K, recently formed the promotions group to help bring diversity, intentionality, and accessibility back into St. Pete’s DIY music scene. Although Strickland and Robinson are playing their first show as Spoiled Rat and Fessi K alongside close friends in Charlie and They Hate Change, their upcoming events will cover a wide span of musicians, genres and even artistic mediums.

“Having to go out and find people to play our shows—I really enjoy the intentionality of that. It’s almost like going out and combing through crates trying to find a specific record. It’s hard work, but there’s a great payoff, ” Robinson tells CL.

Courtesy of Fessi K
Zoe Robinson, 26, music under the moniker Fessi K.
One of the last remaining small venues in St. Pete, almost every Bends show is free to attend; bands are also guaranteed a percentage of bar sales. “We would prefer to pay out of our own profits and have a busier night for everyone involved. In certain situations we are able to do a cover or utilize a larger budget,” Kaye states.

Hundreds of acts across the country have made ears ring at the bar’s back room, including two of its longest-running resident parties, Trippy Squad and UNFUN, which will take over Saturday after We’re Sweet Girls’ debut booking. Kaye wouldn’t share details on his lease at 1st Avenue N, so there’s no public timeline on its future, but we can only hope that the bar has another decade under its belt. “The Bends was born a classy dive and will die a classy dive... if that day ever comes,” Kaye says elusively.

The Bends is the nightcap for all walks of life in The Burg’. You might joke about not going there, but still end up somehow walking underneath that finger anyway. And when you run into your ex in its narrow hallway or in a crowd for another louder-than-life show that makes your ears ring until the next morning, it’s hard to argue that the endearing dive bar doesn’t wholeheartedly fill its niche.

“There’s really not many places to play in St. Pete anymore,” says Strickland, who's performed at The Bends many times before. “I’m really thankful for The Bends in that way; we don’t really know what we’d do without it.”
click to enlarge