A Tampa paraplegic woman dealt with a leaking roof and mold at her apartment. Now she's being evicted

The company that the woman rents from has been caught in several scandals recently. When the ceiling started leaking on Roses Hill in February, rainwater sprayed on the 47-year-old paraplegic woman. She moved to the edge of her nursing bed as water shot from the fan and other parts of the ceiling. Fire alarms started ringing.

She called family members, thinking she might die if a fire broke out. But it was around 1 a.m. and everyone was asleep. Without the use of her legs—which stopped working after a bad car accident in 1992—she was stuck on the bed, getting soaked and wondering what might happen next.

She survived, but then the water led to mold and breathing issues. It hasn't been raining much lately, but her ceiling fan is still wrapped in a paper towel, just in case the leak starts again.

She thought the structural problems in her unit at Mobley Park Apartments just north of downtown were the most daunting issues she'd have to deal with this year.

But when Hill was served a 24-hour notice to evict her residence from the Hillsborough County Sheriff's Office on Monday, she realized she was facing the prospect not having a roof over her head at all. No deputies have shown up to kick her out yet, but her notice says that she was required to be out of her home by Wednesday morning, at the latest.

Hill, whose housing is assisted by Section 8, admits that she had stopped paying her portion of rent for the past several months, after living at the property for around three years. She felt her health was at risk at the apartment, and told management that she refused to pay until things were properly fixed, she said.


Roses Hill, a Tampa paraplegic woman, has dealt with a leaking ceiling and mold for months at her Mobley Park Apartment. After refusing to pay rent because of the unsafe conditions, she has been served with a 24-hour eviction notice. More here: https://t.co/MTflM6gkpu pic.twitter.com/xCbfZNuHA6

Repair men had arrived and patched things up here and there, but the problems persisted, and she didn't feel it was up to standard to pay for living there.

But now that HCSO has threatened her with removal, she's wondering where she and her daughter Miracle will find shelter.

"I asked around about homeless shelters, but was told that a lot of them are full and that we wouldn't like staying there anyways," Hill told Creative Loafing Tampa Bay.

Miracle, who is 21 years old, put some of their belongings in plastic bags, just in case the sheriff arrives, which were scattered around the house. Hill couldn't get up, so Miracle pointed to where there were also leaks near the living room window.

"I'm nervous," Miracle said, when asked about how she's felt ever since sheriff deputies showed up.

The company that manages the property is WRH Realty Services, which works under the ownership company, Southport Financial Services. Earlier this year, Southport made headlines when another property in Tampa, Silver Oaks Apartments, was found to have residents living in dangerous conditions. 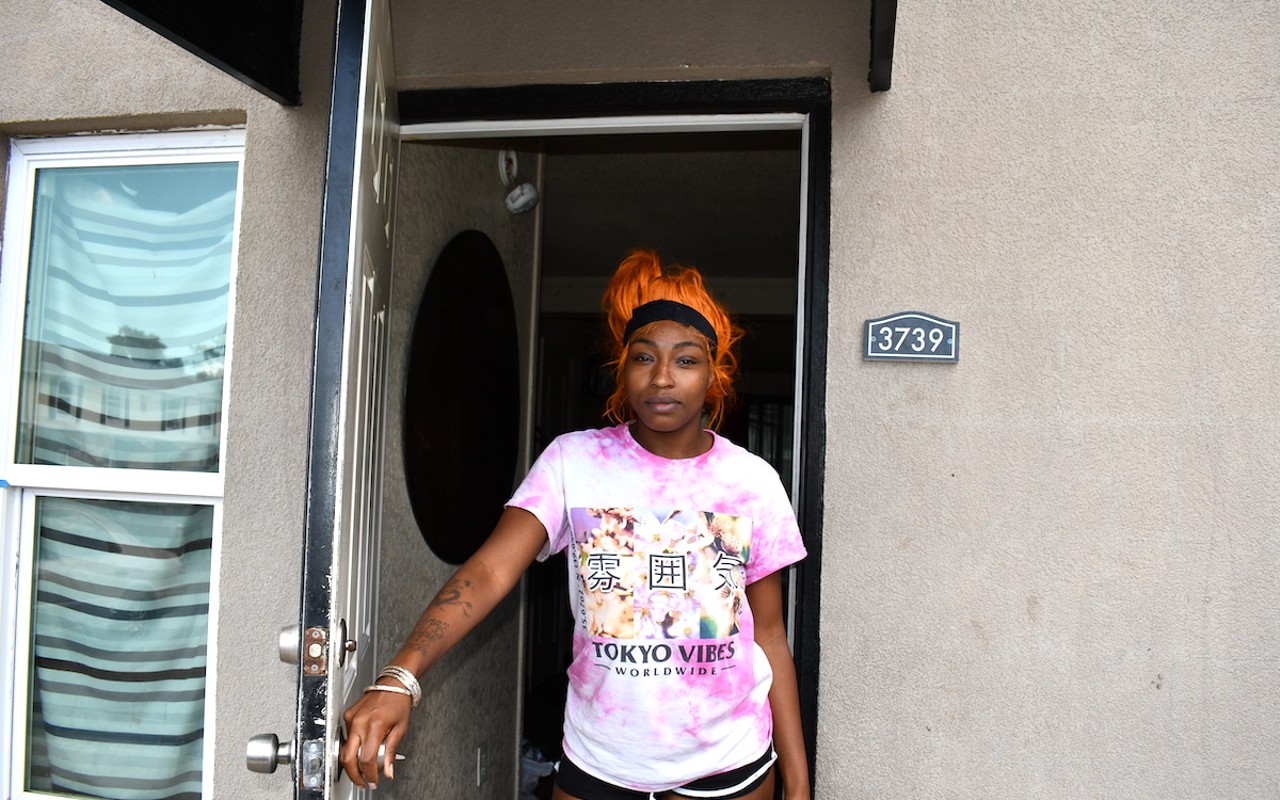 The situation was so bad  that the management company, Cambridge Management, was removed by Housing and Urban Development after failing an inspection. Southport has found itself in several housing scandals in recent years across Florida.

WRH and Southport have not yet responded to request for comment.

On Hill's eviction notice, Dale G. Westling is listed as the attorney for the plaintiff. His office told CL that he was at an eviction seminar and would respond later if he is able.

Hill has been full of anxiety all week. She's reached out to legal services in the area for help, but hasn't heard back yet. She's still having trouble breathing, and she speaks in short bursts before stopping to catch her breath.

Hill says maintenance people just spray painted over the mold, but that it's harder and harder for her to breathe every day.

But right now, she's mainly just concerned with what will happen if her and miracle are forced out of their shelter.

"We're just trying to prepare ourselves for what happens if the sheriff ends up coming," she said. "Right now, we don't have anywhere to go."
© 2023 Creative Loafing Tampa Bay