Customers of the all-vegan restaurant can expect a pub-inspired menu, outdoor seating and live entertainment.

Kyla Fields
A new vegan eatery with old school St. Pete roots is ready to make its debut in the Historic Kenwood district.

The newly-renovated, 2,275-square-foot restaurant at 3118 3rd Ave. N is nestled in a plaza next to Gateway Subs, Creative Grape and Back Alley Nails. With a brand-new menu and contemporary interior to match, the new-and-improved Cider Press is ready to be the go-to neighborhood bar and restaurant for all.

The space fits up to 150 patrons, and features a large L-shaped bar, several TVs, outdoor patio seating, and an actual cider press from 1869—that was once the showpiece at its former Central Avenue restaurant as well. 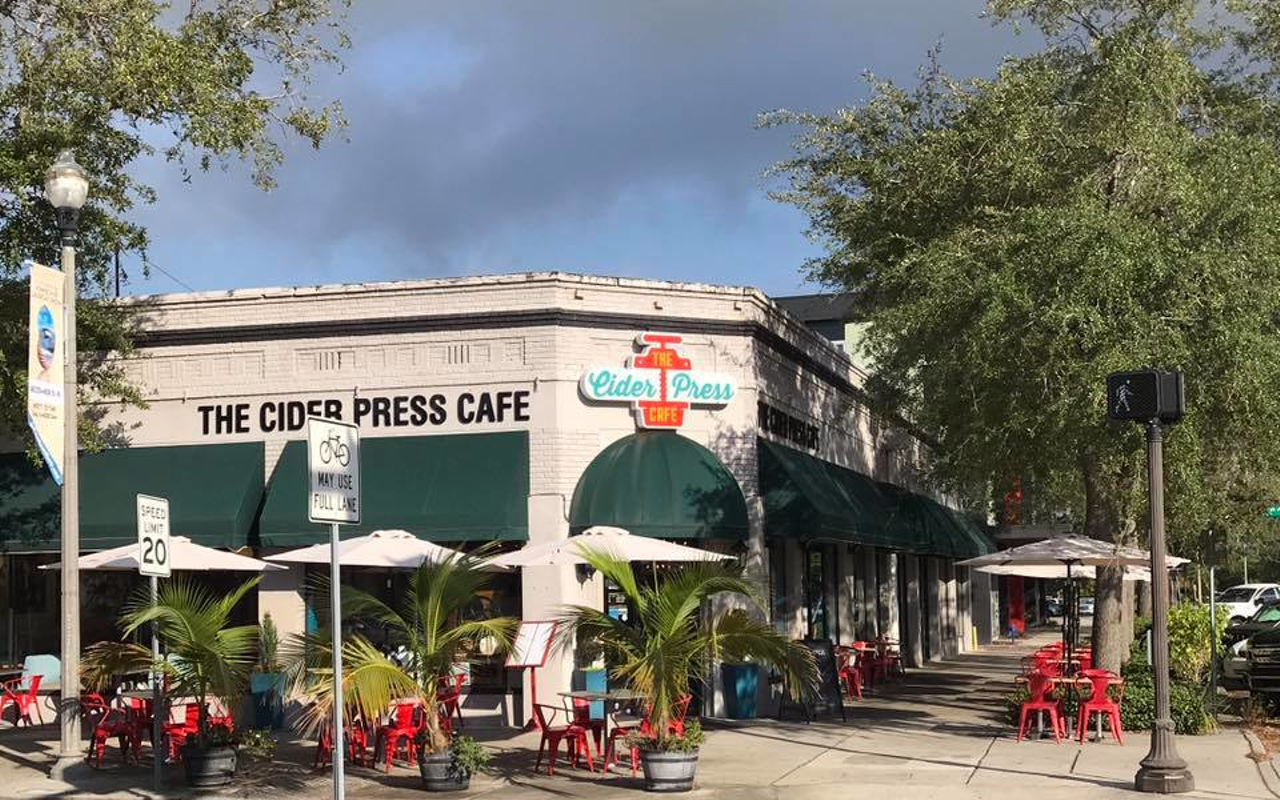 St. Pete’s Cider Press Cafe closing on Central, but reopening as vegan gastropub two miles away: It’s closing at the end of this year or after the new space’s buildout is complete.

Several aspects of the new gastropub pay homage to the space's predecessor, the once-popular gay club Georgie's Alibi, which closed in 2015. A large garage-like window separates the indoor bar from patio seating, and owners Johan Everstijn and Roland Strobel plan to honor a few of the club's infamous drink specials— like its "Long Island Thursdays"—after Cider Press' soft opening phase.

A long way from its raw vegan origins, Cider Press' new menu is full of hearty, pub-inspired dishes with a Southern-Cajun twist. Appetizers on its soft opening menu include fried jambalaya balls with a spicy Cajun sauce, bang bang "shrimp," pickle fries and soft pretzels, while sandwich options includes a Beyond burger, a buffalo chicken sandwich and its take on a shrimp po'boy—complete with bread shipped straight from New Orleans.

And for the first time in Cider Press  history, the veteran vegan spot now boasts a full-service bar with its own English-inspired signature cocktails. Local beer from breweries like 3 Daughters and Cigar City are offered alongside craft mocktails and cocktails, like its "thyme warp" complete with lemon, grapefruit, peach puree and thyme (and vodka if you'd like.)


Everstijn tells Creative Loafing Tampa that it's paramount that Cider Press remains affordable, so the most expensive dinner offering are its fish n' chips and shrimp étouffee platters, both priced at $16.99. He also says that as Cider Press expands its hours over the next the next few months, so will its menu, as his previous customers are still begging for the return of its beloved buffalo mac and cheese.

Although much of its menu is inspired by Southern comfort food, Everstijn explains that they eventually want to move away from imitation meat products and focus on more whole food options, like its battered banana blossom "fish."

Eventually, the vegan bar and restaurant also plans to host live entertainment, as a few booths can be rearranged to create a small indoor stage.

Its exciting new food and drink programs aside, perhaps one of the most interesting parts of the newly-revamped Cider Press is the elimination of all server positions in its  restaurant. A hostess will lead guests to their tables, but customers will use their own phones to place orders via a QR code menu, as employees from the kitchen will run the food out to them.

"Our customers will still have the ability to tip the entire kitchen, of course," Everstijn says. "And all of the bartenders will keep their own tips. This new system was designed for efficiency first and foremost."

The news of Cider Press’ move was announced in summer of 2021, due to a lease dispute for its flagship Central Avenue location. Its former downtown location was replaced by Italian restaurant Bonu Taverna, which opened earlier this year. Strobel tells CL that Cider Press Gastropub is locked into its new lease for 15 years, and certainly won't encounter the same landlord problems they did at their previous location.

Keep up with the latest updates and menu sneak peeks by visiting @ciderpresscafestpete on Facebook and following @cider_press_gastropub on Instagram.
© 2023 Creative Loafing Tampa Bay