She’s not getting older, she’s getting better. 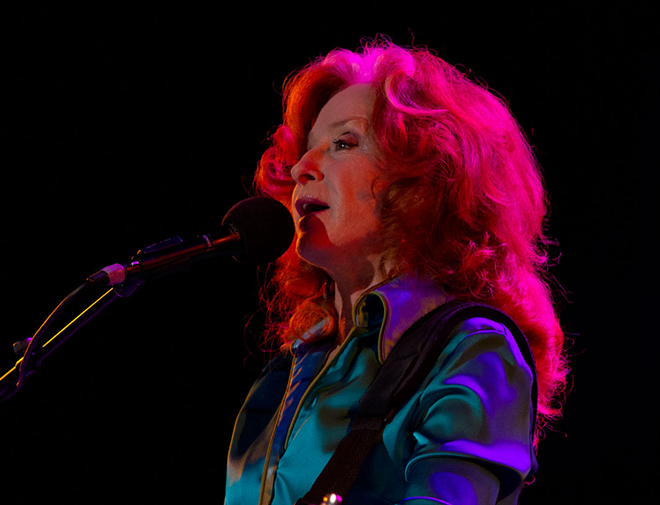 Photo by C. Elliot via Shore Fire Media
General press photo of Bonnie Raitt
I hope I’m at least half as cool and lively as Bonnie Raitt is when I’m 73 years old. The longtime, veteran, blues-rock star brought her current, eight month-long tour to a close Saturday at Clearwater’s superb Ruth Eckerd Hall and showed a packed house that she’s still definitely as vital and relevant as ever.

As a busy recording and touring artist since the dawn of the 1970s, Raitt has more than paid her dues and has paved the way for, not only budding female artists, but plenty of male musicians as well. Showing little signs of slowing down at the age of 73, the only thing Raitt had to battle for the exquisite, two-hour performance she turned in was a bit of a chest cold. Admitting to the audience that she’d begun her day coughing and battling the ailment, she apologized several times for sounding somewhat gravelly and contended that she’d just have to “dig deep,” she said, to sing her songs.

Where many artists might have used this setback as a hindrance for delivering a solid concert, Raitt, a consummate professional, plowed magnificently through the performance and, truth be told, the unintended raspiness to her voice added a layer of grit and soul to the words she was belting the whole night. Talk about turning a potential negative into a glaring positive.

The flame-haired, petite singer-songwriter gave praise and thanks to the crowd that had come to see her before singing a note. Upon walking out to the stage with her fantastic band, Raitt gushed “Ruth Eckerd Hall! Sold out! Thanks for packing it in!” referring to the capacity crowd that turned up. Only one of the many times she’d share her thanks and appreciation for the fans, Raitt seemed downright elated to be in front of an audience, on a stage, doing what she’d done for the bulk of her entire life.

Kicking off the two-hour program off with “Made Up My Mind,” a song from her most recent Grammy-nominated album Just Like That…, Raitt made it clear that her onstage charisma, her slide guitar playing chops, and her distinctive vocal style were all glowing radiantly. It would have been difficult to surmise that the singer was inflicted with some self-admitted vocal issues if she hadn’t told the audience sporadically throughout the show. Popping a throat lozenge here and there and drinking from an insulated cup (containing a warm, soothing beverage, presumably) throughout the night, Raitt managed to deliver a spectacular array of music that spanned her long career and offered between-song anecdotes that wowed and enthralled her fans.

“I hope I can sing this,” Raitt muttered, regarding the throat and coughing ailments she was battling, before launching into “Blame it on Me,” another cut from her most current album. Well, she not only sang it, she owned it. The soulful, blues feel of the song was enhanced by the added layer of grit in her voice and by the expert Hammond B-3 organ work of keyboardist Glenn Patscha and made the delivery one of the night’s many standout moments.

Not one to shy away from current events and topical items, Raitt offered her sorrow for those affected by recent hurricanes throughout our home state, offered support for Ukraine and pointed out the Ukrainian flag perched in front of drummer Ricky Fataar’s riser, and spoke about the importance of having music unify people during the divisive times we’re living through, all messages which were warmly received by the engaged audience.

On a lighter note, Raitt spoke often about how at home she felt being out on the road after Covid brought the touring industry to a standstill in recent years. While lamenting that she felt like she was on “house arrest” while at home and unable to tour for that span of time, Raitt, who has been a touring fixture for the better part of the last 50 years, simultaneously offered her sadness for having this current, whirlwind tour come to an end. “Now I’ll have to go grocery shopping, and clean my kitchen” she joked, referring to her having to return to normal, domestic duties.

Offering an homage to the great singer-songwriter John Prine (a part-time Gulfport resident who passed away in 2020), and what he personally meant to her, Raitt delivered a goosebump-inducing reading of a song she’s long been associated with, the Prine penned ballad “Angel from Montgomery” and cemented her status as an emotive and powerful interpreter of song. In another nod to a different legendary songwriter, Raitt and her band pulled off an impressive, blues-tinged reading of Bob Dylan’s “Million Miles” and made it all their own.

In what appeared to be off the cuff deviations from what might have been a predetermined set list, Raitt seemed to want to tailor her performance to better fit the vocal challenges she was experiencing. Occasionally calling out song titles to her outstanding band, Raitt told the audience that she was better suited for singing ballads on this night. “Love Letter,” a fun, pop nugget from her award-winning 1989 album Nick of Time benefitted from Raitt’s ability to mix sensuality with tenacity within her delivery.

Ending this fantastic night with a well-deserved encore that included the absolute showstopping, heartbreaking “I Can’t Make You Love Me,” Raitt was in full command of her voice, of her band, and of her adoring audience. Her warm, sensuous vocal tone was on full display and wasn’t marred or affected at all by the conditions she’d described throughout the night. Her final act also included a rollicking B.B. King cover and a duet with the show’s opening act, singer-songwriter Marc Cohn, for a heartfelt rendition of Van Morrison’s classic “Crazy Love.”

While aging gracefully and remaining active isn’t a popular or widespread concept in the world of music, Raitt successfully pulls off both of those feats. Showing no signs of slowing, she namechecked fellow artists Tony Bennett, Mick Jagger, and Keith Richards and praised them for staying musically active so late in their lives.

Based on this powerhouse performance, it’s clear that Raitt, too, has plenty more music and tours in her. She even mentioned that her next tour would start up in early 2023. Sure, it’s a tired cliché, but, in Bonnie Raitt’s case, it’s certainly true: she’s not getting older, she’s getting better. Just ask anyone who witnessed this show.
© 2022 Creative Loafing Tampa Bay