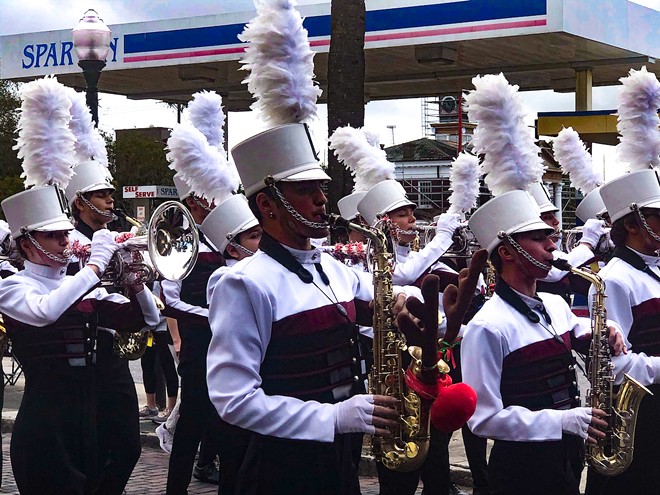 Tarpon Springs High / Facebook
In 2019, merely months before COVID-19 hit, Kevin Ford was informed that under his direction, the Tarpon Springs High School Leadership Conservatory for the Arts (TSLCA) would once again be invited to march in the Macy’s Thanksgiving Day Parade, which airs on NBC starting at 9 a.m.

“[We] could not tell anyone we were accepted because of the delay in band participation,” Ford told Creative Loafing Tampa Bay. Not to mention that this appearance had to be pushed off by a year, thanks to the 2020 installment of the parade that featured a smattering of New York-based marching bands only.

Over the last 18 months, galas were held, donations were requested, and ultimately, TSLCA succeeded in ensuring that every student could make it to the Big Apple, where the ensemble landed on Monday.

Any band kid—or person who attended a high school with a largely funded marching band—is well aware of the long, strenuous hours that go into rehearsals, and getting everything right.

“We started this process back in May, where we started to develop the conceptual idea for the parade,” Ford told CL. This year’s theme centers around being a holiday shopper in the 1940s, inspired by a Macy’s ad that once caught Ford’s eye.

Not only is this the second time TSLCA will be in the parade, but it’s also the second time it will be centering its show around the 1940s. During the band’s 2013 appearance, “An American Reunion,” based on the end of WWII—more specifically, the photo of the Navy sailor kissing a dental assistant on V-J Day in 1945—was showcased, and even featured the kiss at the very end. But that time, it was in color.

Though the band only has about two minutes to present its production on television, if this new performance is half as elaborate as other past productions, such as 2018’s stadium-based “RP1,” based on Ernest Cline’s “Ready Player One,” and featuring screens for the first time, it’ll be an unforgettable moment Thursday morning.

But perhaps the most eye-widening bit of this is that TSLCA will be the last marching band to perform, and will usher Santa Claus in at the very end.

“In October, all of the directors from each band fly to NYC where we meet with the Macy’s creative producer and the directors from NBC, and we present our production concepts,” Ford says. As a result, both NBC and Macy’s get together and determine what production should be where, and as recently as weeks ago, TSLCA learned that it had the honor of being the last band to perform.

After the students’ return from their week-long venture to New York—which includes seeing Broadway shows and getting involved with choreography workshops—there are still plenty of events coming up for when they return.

In April, the winter color guard will return to the Winter Guard International World Championships in Dayton, Ohio. And based on the Conservatory’s history, which includes a 2018 Carnegie Hall gig from the wind ensemble, and a seemingly annual residency performing for Bands of America since 2017, there’s to be no slowing down anytime soon.

The freshmen who were around when the news initially broke are now seniors, so we can’t help but shed a tear for everyone who has since graduated. But on the other hand, there might be siblings marching this year, so Turkey Day in New York is probably a big dream come true for some.

As long as it’s as different from “Planes, Trains, and Automobiles” as possible.
© 2022 Creative Loafing Tampa Bay