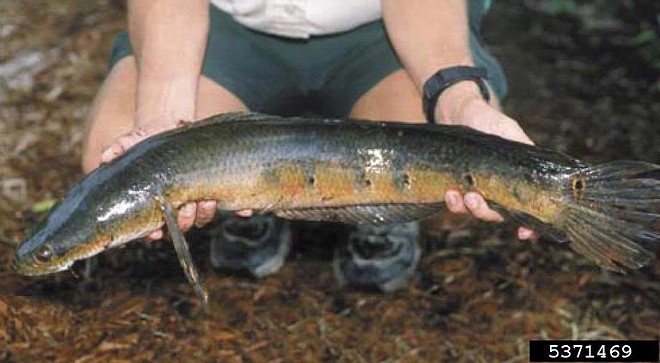 For the first time on record, researchers have located a population of non-native aggressive, air-breathing fish known as the goldline snakehead (Channa aurolineata) in a Manatee County pond, according to a recent study published in the journal Aquatic Invasions, and shared today by the Florida Museum of Natural History.

The FMNH says officers with the Florida Fish and Wildlife Conservation Commission (FWC), removed about 400 of the goldline snakeheads from the pond, as well as seven other non-native species, including walking catfish and Asian swamp eel.

Known as predatory ornamental fish found mostly in Thailand, it's believed humans are to blame for releasing the species into the wild, which is a problem since goldline snakeheads are able to withstand extreme and diverse environmental conditions, including drought. By utilizing the ability to extract oxygen from both water and air, goldline snakeheads are able to survive out of water for almost four days.

In the study, which spanned a little over a year, researchers noted that goldline snakeheads were even seen hunting frogs on land, which is a rarely seen behavior from the species.

From the Florida Museum of Natural History:


During a rainy evening in 2020, several snakeheads slithered onto the grassy pond bank, lured by green tree frogs (Hyla cinerea) active at the water’s edge. When the fish were in striking distance, they rapidly twisted their upper body in the direction of a frog, returning to the water after a successful catch. While snakeheads are known to move over land, their ability to feed while doing so emphasizes the fish’s potential negative impact on native species. 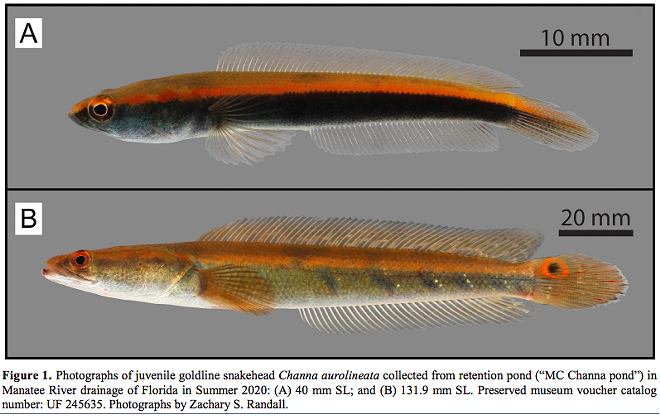 Image via Aquatic Invasions
The discovery of the Manatee County population is also notable since the site is far from the only other known population of goldline snakeheads in the United States, which until recently was in Broward County.

However, researchers don't believe the fish naturally migrated this far west, and instead think they were likely brought here by humans .

“Any reproducing non-indigenous species has the potential for deleterious effects on the environment to which it has been introduced,” said Robert Robins, ichthyology collection manager at the Florida Museum of Natural history and co-author on the study. “Most never become invasive, but some do.”
© 2023 Creative Loafing Tampa Bay