On Monday, New Port Richey Police Department announced that The Florida Department of Law Enforcement (FDLE) is currently working on the investigation surrounding a Nov. 3 incident when officers shot a white male. The man was reportedly inside Sullivan’s Boulevard Lounge and talking about shooting people and threatening to shoot people as they were walking inside. NPRPD says that when officers arrived at the location and attempted to make contact with the 56-year-old, the man pulled out a gun and pointed it towards the officers. The man, later identified as Guy Bradly Able, succumbed to his injuries and was pronounced deceased at North Bay Hospital.

The news from NPR PD came a day after Pasco Black Lives Matter protesters marched to demand more transparency and accountability within the department. On Sunday, the group—which has caused zero property damage—listed off demands including an investigation by FDLE into the entire police department, body cams for all officers to be worn at all times, and a community accountability board.

The business where the shooting happened did have cameras—and footage can be watched here—but neither officer involved in the Nov. 3 incident was wearing a bodycam. On Sunday, Bogart told WFTS that the bodycams were back-ordered but just came in, adding that the department’s IT department is currently working to program them.

Also present at the Sunday protest was a small group of Proud Boys who looked like they just had a few beers at the local wing house. Some of the gents proudly wore the collared shirt uniform of the SPLC-designated hate group. Others wore Hawaiian shirts co-opted by members of another fringe movement, the Boogaloo. A few more took no hesitation to flash the “white power” sign at and around BLM protesters.

The Proud Boys have been banned from Facebook and Instagram. In August, the group took to the social media site Parler to glorify and praise Kyle Rittenhouse, who was charged with first-degree intentional homicide in connection with shootings that left two people dead in Kenosha, Wisconsin. Bail for Rittenhouse was recently set at $2 million.

In August, Creative Loafing Tampa Bay asked New Port Richey City Council and PD to comment on the presence of hate groups in their town. Not one email to council was returned, but NPR PD Deputy Chief Lauren Letona told CL that, "We cannot predict who is going to show up at these events. We are there to provide safety and enforce the law regardless of what groups are involved.” A month later, The NPR PD told CL it no longer employs an officer who allegedly gave a pro-police Facebook user information on the whereabouts of a Black Lives Matter demonstration.

On Tuesday, Letona emailed CL, writing, "To my knowledge, there was no property damage reported from this last weekend’s event." In regards to CL's question about a SPLC-designated hate group with members flashing "White Power" signs Letona wrote, "they were doing nothing illegal, so we have no further comment."

Classifying throwing "white power" signs as a crime is certainly a gray area. For it to be a hate crime, there has to be an underlying offense. It's not a crime just to be hateful and to say so, but if it's coupled with violence or a credible threat of violence, now it's a hate crime. Some watching video from the event  might argue that a simple assault happened (state statute: 784.011 classifies it as second-degree misdemeanor; an “assault” is an intentional, unlawful threat by word or act to do violence to the person of another, coupled with an apparent ability to do so, and doing some act which creates a well-founded fear in such other person that such violence is imminent"). But then again, why would a Proud Boy say something violent in front of cop? In New Port Richey, cops just pray with Proud Boys.

The more interesting question is whether the Proud Boys meet the definition of a "criminal gang" under the Florida Statute. —Ray Roa 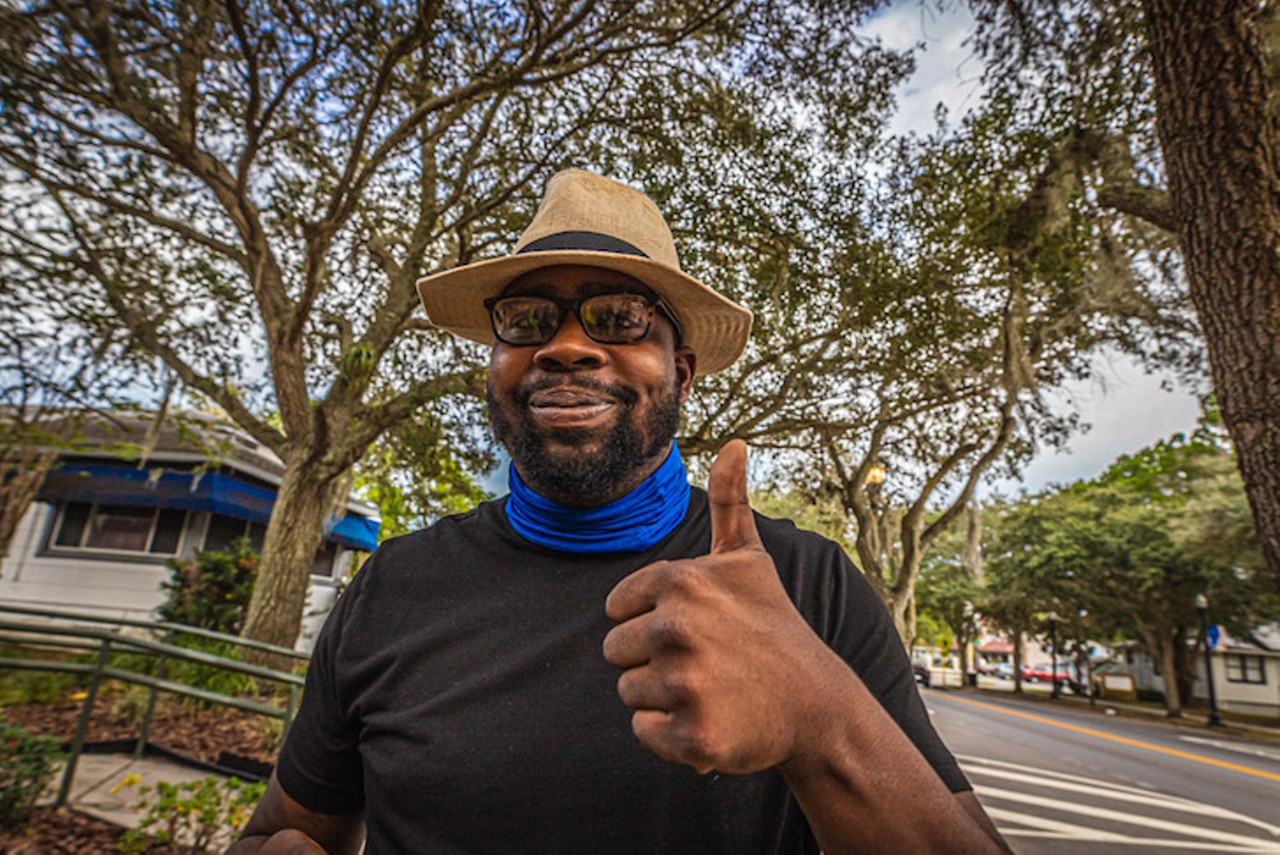 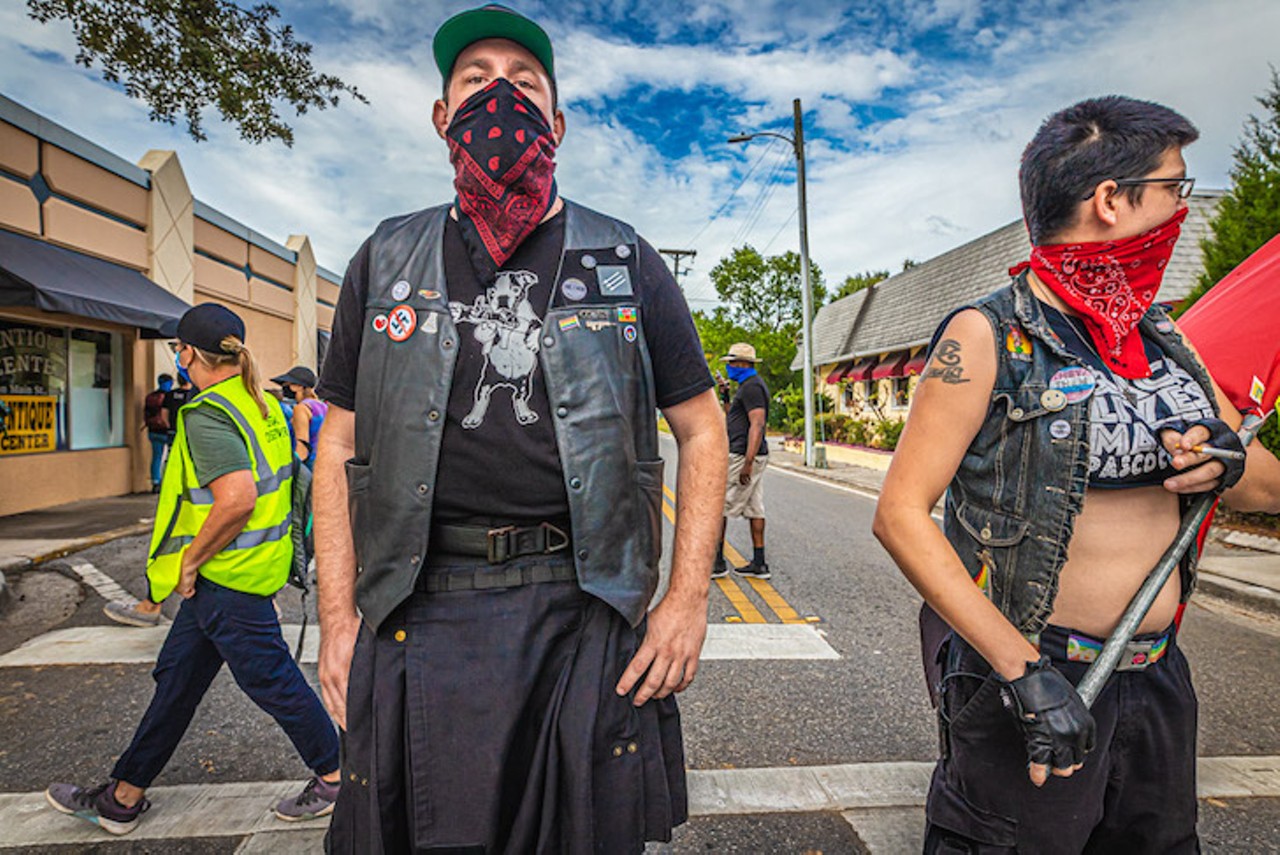