On Sunday afternoon, around 60 protesters gathered at Columbus Statue Park to once again protest Tampa’s monument to a genocidal maniac. The action came on the eve of Indigenous Peoples Day (which some localities still recognize as Columbus Day).

Members of the Florida Indigenous Alliance (FIA), who organized the event, offered prayers and songs to the victims of Christopher Columbus. They made statements full of rage toward Columbus and the deadly process of colonization that he represents.

Some pointed out that Columbus fed Indigenous babies in the Caribbean to dogs. Others decried him for enslaving and raping young women and mutilating the genitals of Indigenous people. Emotional outcries against the statue and the city officials who keep it there were made as supporters watched on.

RELATED ‘A monument to genocide’: Tampa’s defense of its Christopher Columbus Statue is a disgrace.

Some of the supporters carried red dresses on poles, which represented missing and murdered Indigenous women, an aspect of the ongoing genocide against Native people. A teddy bear with an orange shirt sat at the base of the statue, representing the remains of thousands of Indigenous children that have been found recently at Canada’s “residential schools” where Native children were tortured and killed. Meanwhile, The U.S. has yet to fully begin to uncover all of the bodies that lie were lost because of this country’s “residential schools”.

Ally groups spoke as well. Members of the Party for Socialism and Liberation, the Uhuru Solidarity Movement, Dream Defenders, the Central Florida Popular Front and others discussed the ill effects of colonization and capitalism across the world. Tampa Natives spoke about their ongoing struggle to change the names of schools where their images are used as mascots—the Chamberlain High “chiefs” are one example.

Sheridan Murphy of FIA, who’s been protesting the Columbus statue since 1992, wrapped up the speeches and afterwards, attendees took turns putting handprints of fake blood on the statue. When everyone was finished, the statue was drenched in the fake blood, symbolizing Columbus’ killing spree.Last year, Tampa Police Department showed up to defend the statue when people put handprints on it, leading to a tense standoff between protesters and the police. But this year, no police showed up, and FIA and their supporters were able to conclude the ceremony without interruption.—Justin Garcia 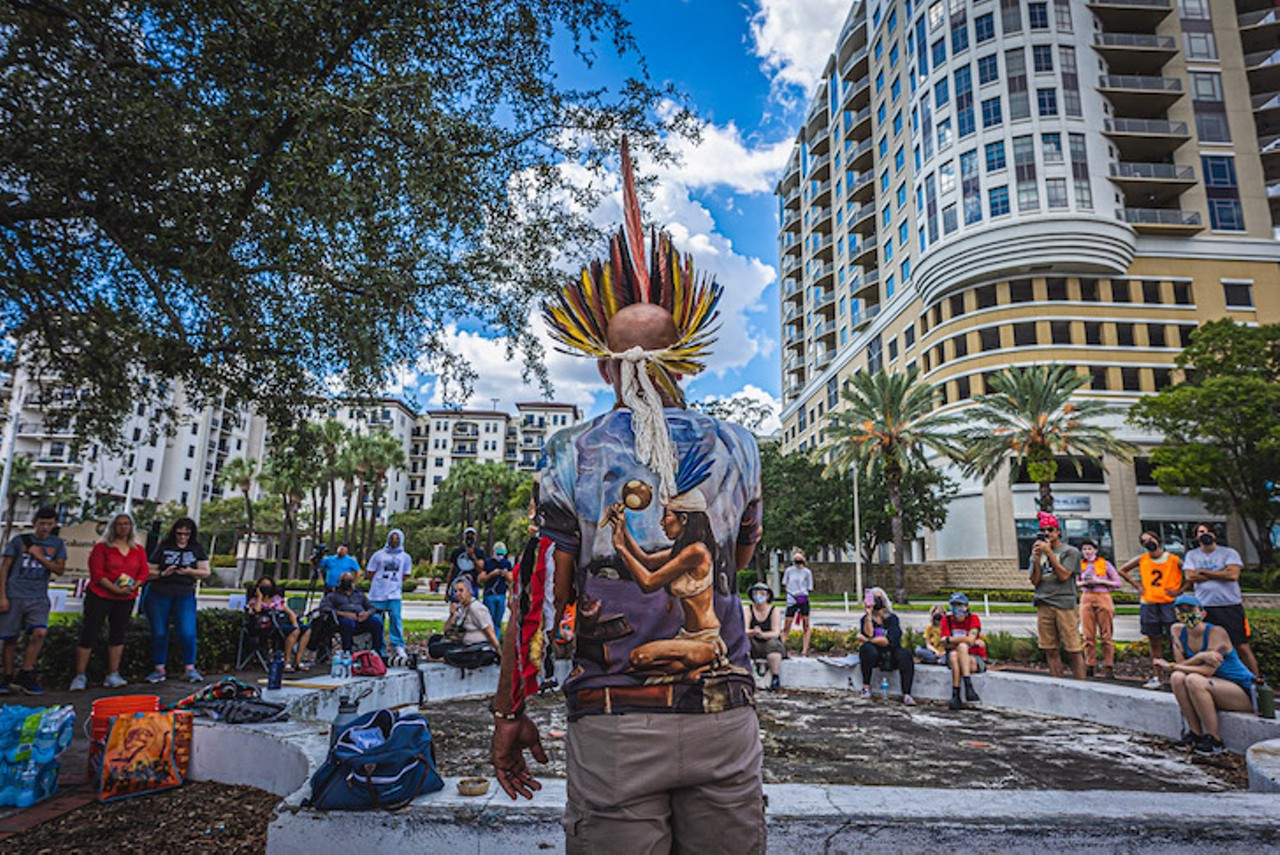