Big plans were broken on Sunday night, and John Mayer knew it.

“I know a lot of you had other things to do — you know, Game of Thrones,” the Grammy-winning songwriter and guitarist told nearly 12,000 people at Tampa’s Amalie Arena.

“But TiVo still exists, right?” Mayer asked, referencing the digital video recording technology that went to market in 1999 (the same year his independent Inside Wants Out EP dropped).

TiVo certainly still exists, but Mayer’s existence — and his existential search for more meaning in life — is much more relevant in the grand scheme of popular culture. For over two hours, Mayer — 39 years old, handsome as ever and on tour in support of his seventh full-length for Columbia Records — gave fans an intimate peek into what that quest looks like these days. Dubbed the “The Search For Everything,” Mayer’s current trek features a show spliced into five sets or “chapters” during which he plays backed by a full band, in a trio setting, and solo acoustic. It’s an interesting way to portion up a performance, but Mayer is an interesting figure to slice up and inspect, too.

The man with a stupid mouth that used to get him in trouble every time it opened has had his opinions and questionable jokes reined in for a while now, and he once again let his guitar do the talking at Amalie. However, the biggest difference between Sunday’s set and Mayer’s last appearance in Tampa (a September 2013 concert at the MidFlorida Credit Union Amphitheatre) was the talent onstage.

Flanked by drummer Steve Jordan and bassist Pino Palladino (names that show up in album credits for icons like Jaco Pastorius, Bob Dylan, The Rolling Stones, D’Angelo, Jeff Beck, The Who and so many more), Mayer put together a blues-rock set that found the triumvirate absolutely ripping through “Who Did You Think I Was” and “Wait Until Tomorrow” while also mixing in a searing, slow-cooked version of “Vultures.” At 20 minutes long, the mini-set was an all too-short tease from a lineup that desperately needs to tour on its own again (the last time Florida saw it was a September 2005 show at Orlando’s House of Blues).

Still, in spite of the beatdown the trio delivered, it was in the band setting where Mayer really found the deep grooves and evanescent nuance guitar-playing songwriters seek when they get onstage.

Longtime collaborator David Ryan Harris (who plays The Attic at Rock Brothers Brewing in October) added complexity to the open-tuned heartache of “In Your Atmosphere.” Headscratchingly beautiful was the addition of Grammy-winning guitarist Isaiah Sharkey, who has appeared on records by Anderson.Paak, Corinne Bailey Rae, Ronald Isley and more (fingers crossed for him to be in Lalah Hathaway’s band when the soul icon hits Tampa Theatre in a ten days).

With the 28-year-old Chicagoan in the lineup, Mayer, who was very boho in his Big Shirt Sunday outfit, didn’t have to work hard to please the audience. He even stepped completely out of the spotlight to let Sharkey take extended solos on “If I Ever Get Around to Living” and “Moving On and Getting Over.” Sharkey may have sat back during an incandescent, hot pink take on “Rosie,” but he was a dream during the encore when the stage (two giant screens arranged perpendicular to each other, creating a digital diorama effect) glowed orange like a hot coal aflame.

If you are the company you keep, then Mayer should do everything in his power to stay the course with this collective; but cost-wise, it seems like an improbability. Grammy-nominated pianist Larry Goldings is minding the keys and Mayer’s backup singers — Tiffany Palmer and Carlos Ricketts — have recorded with U2, The Killers, Andrea Bocelli and Bette Midler among others. It would be a shame if Mayer didn’t squeeze one more tour out of the crew because gems like a dusty “Queen Of California,” the rollicking “Helpless” and a pouty-lipped take on “Rosie” were pristine examples of Mayer’s ability to build a perfect pop song out of parts that sound simple but are fiendishly difficult to arrange and play.

Any maybe that’s what so special about Sunday night’s set — it felt like the assembled talent onstage was too good to be true. And perhaps that’s the essence of self-exploration, too. Nothing good is really meant to last forever, right?

Mayer — according to CL staff who attended Saturday’s show in Sunrise, Florida — was cheerful and even danced around joyfully at the BB&T Center. He did tell a few jokes in Tampa, but there was something subdued about Mayer during Sunday’s intimate, two-hour set.

Was it the alt-right douches dominating cable television over the weekend? We are dealing with the guy who wrote war-damning tunes “Waiting On The World To Change” and “Belief,” after all.

Maybe it was the mini doughnuts.

Maybe it really was because we were all missing Game of Thrones.

“A great big bang and dinosaurs/Fiery raining meteors/It all ends unfortunately,” is how the opening verse of “Search For Everything” surprise “You’re Gonna Live Forever In Me” goes.

Mayer closed Sunday’s show with a version of the song, sitting alone on a pure white stage and hunched over a small white piano. The whistled melody felt as forlorn as the song’s lyrics, which juxtapose the idea of eternity and the all but certain end of everything we hold dear.

In that moment, whatever had John feeling contemplative and quiet felt real, and the show felt like a stealthy look into a new version of Mayer as he enters his 40s.

“You’re gonna live forever in me/I’ll guaranteed, just wait and see,” is the line that closed out the night. And as Mayer walked through a hidden doorway before exit music played, it was evident that we might be waiting for a while to see Mayer and a lineup like this again.

And that’s okay, because plans were made to be broken, and (guaranteed or not) that crowd will be more than happy to wait and see if more Mayer in their lives is what was meant to be.

Listen to playlist featuring songs from the set here and see more photos from the show below the setlist.

Your Body Is A Wonderland

Freefallin’ (Tom Petty and the Heartbreakers)

Who Did You Think I Was

If I Ever Get Around to Living

Slow Dancing In A Burning Room

You're Gonna Live Forever in Me

("Theme from Search For Everything”) 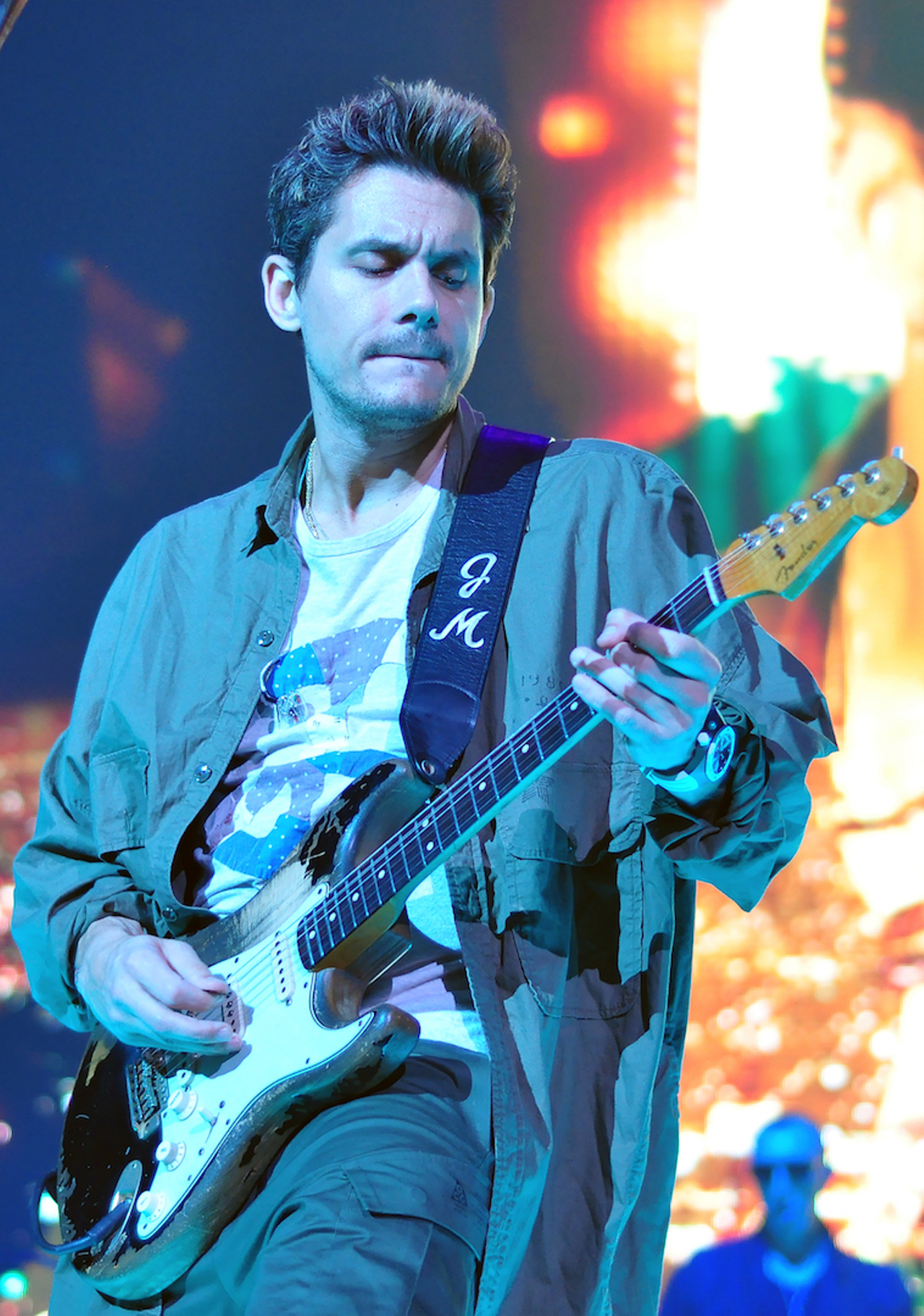 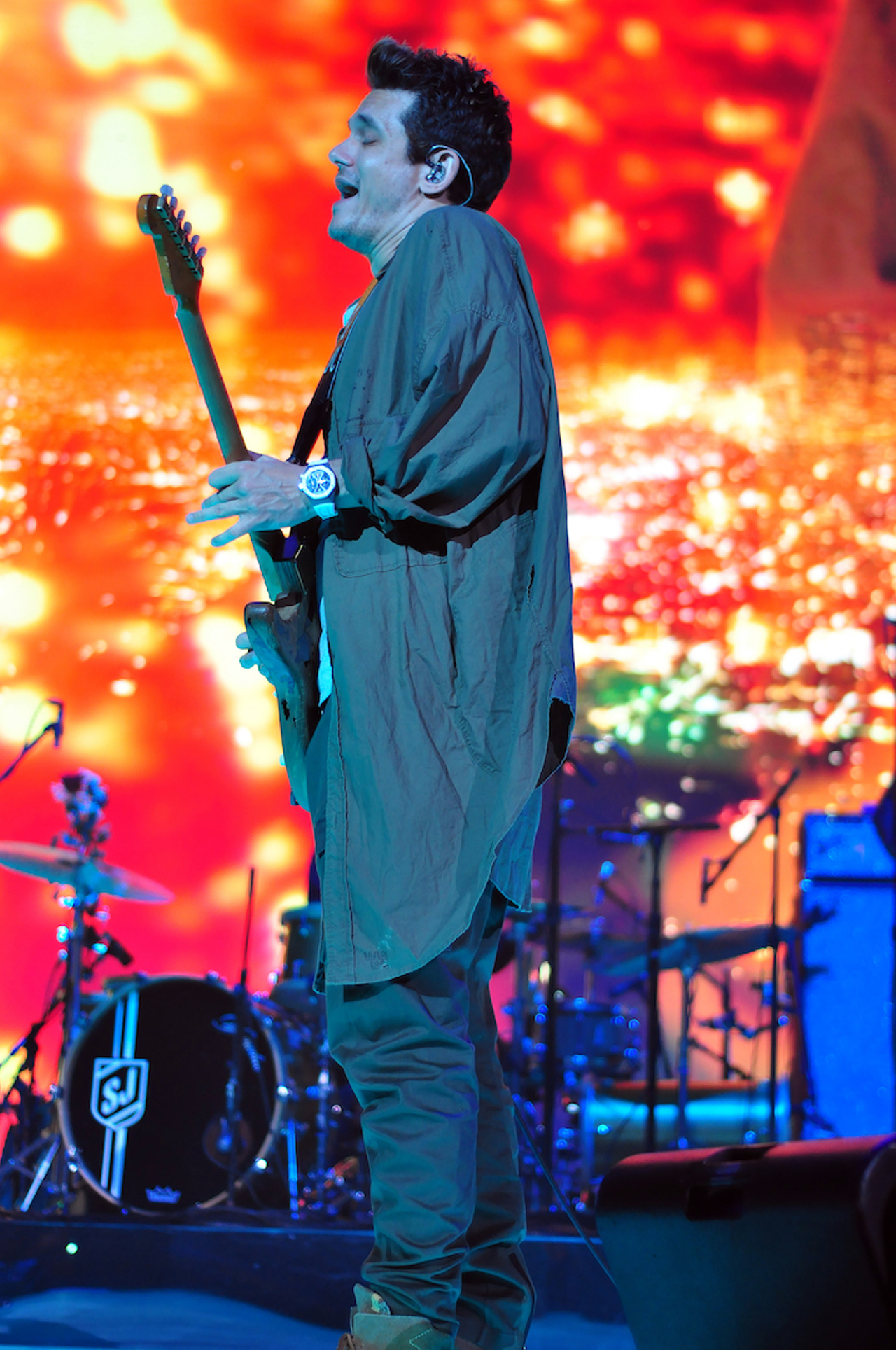 [image-13] John Mayer’s first EP was a self-released 1999 collection of songs he called Inside Wants Out, and over the last 23…