Photo by Dave Decker
The Black Keys play MidFlorida Credit Union Amphitheatre in Tampa, Florida on Aug. 25, 2022.
“That’s Patrick on the drums, my name is Dan, we’re the Black Keys from Akron, Ohio,” announced Dan Auerbach midway through his Tampa set Thursday night. Sheets of rain coming in sideways couldn’t keep the fans away from a heavy hitter of a bill where Early James kicked things off. Band of Horses, playing direct support, had the crowd fully engaged and singing along after a 10-song set featuring hits such as, “Laredo,” “The Great Salt Lake,” “The Funeral,” and “No One’s Gonna Love You.”

Prefaced by a facetious video, urging fans that there was still time to leave and say how dare bring your kids to see a “dropout” tour, The Black Keys emerged. Carney coolly took the stage followed by Auerbach (in his signature sunnies) and the rest of the band dove into a 22-song set spanning the band’s 20-year existence. 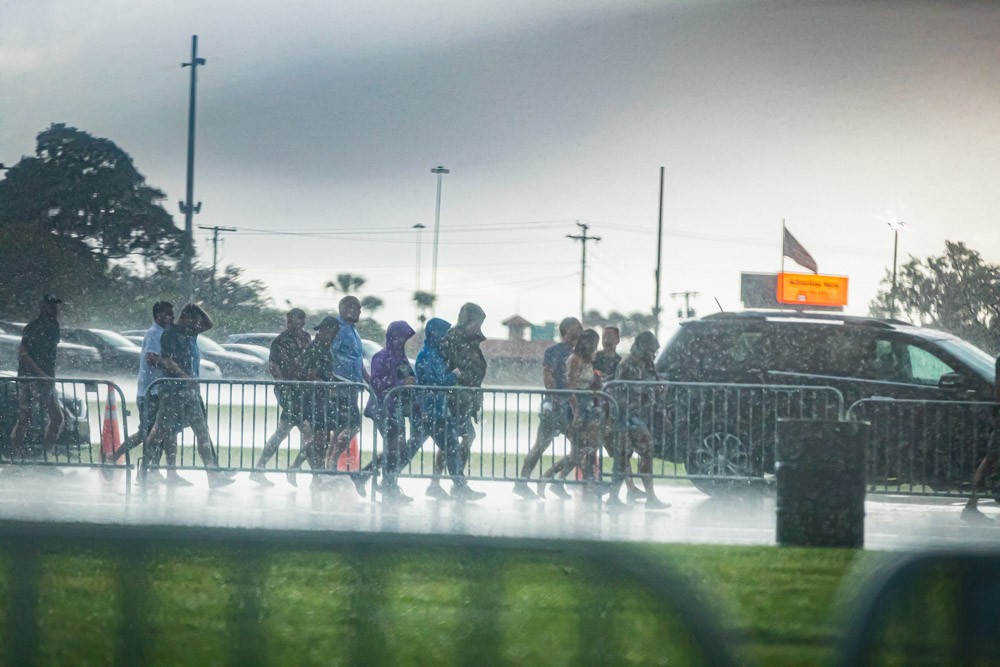 Photo by Dave Decker
Crowds to see The Black Keys play MidFlorida Credit Union Amphitheatre in Tampa, Florida on Aug. 25, 2022.
The Keys opened with fan favorites (“Howling For You,” “Fever,”and “Gold on the Ceiling”) before transitioning into a set featuring songs from their 2021 album, Delta Kream. Joined by Mississippi blues guitar legend Kenny Brown on slide guitar, a five-song mini-set showcased the band’s heavy blues influences. Brown—who also joined the Keys for a September 2021 set at Jannus Live—transported the crowd somewhere deep into the bayou of the Mississippi River Delta, before making an exit.

The Akron boys powered through the rest of their set with fervor, locked in to each song, playing hit after hit, old and new, slowing the tempo down with “Everlasting Light” and closing out the set with their single, “Wild Child” from the band's latest album Dropout Boogie, and “Long Gone” from perhaps their most popular album, Brothers, before slipping off of the stage to a screaming crowd. The band arose once more for acoustic takes “Little Black Submarines” and “Lonely Boy” before bidding the fans adieu.

The evening was special in a sense that, while watching The Black Keys perform, there is an undeniable kind of chemistry between Carney and Aurbach, a kind of synergy that started when they were teenage boys growing and learning as musicians together. It’s almost as if they have invited you into their basement for a personal jam session, gratuitous guitar solos and all, to enjoy one of the best rock bands to come from this generation.

The Black Keys play loose and dangerous during St. Pete stop of the band’s ‘World Tour of America’

Review: In Tampa more than 13,000 fans show why the Iron Maiden family might never slow down at all