It's not just your imagination, traffic in Tampa Bay is, in fact, statistically terrible. And, it makes sense—with rapid growth comes increased traffic.


Tampa Bay is indeed growing faster than most metros in the United States. According to a 2020 study from financial site Wallethub, the Bay area was the 9th fastest growing metro in the country for population growth. So it's not hard to understand that last summer a different study from auto insurance site Quote Wizard ranked the Tampa metro as the 4th worst area in the country for traffic accidents.

With this in mind, Creative Loafing Tampa Bay was curious exactly where these high volume traffic accidents were happening. So, what follows is the most recently available intersection data from FDOT, spanning 2015-2019.

Of course, crashes on FDOT highways don't paint a complete picture of Tampa Bay's "carmageddon," mostly because this data doesn't include accidents that occured on county and city-owned roads. But it's worth noting that FDOT highways and roads are often the busiest, most traveled arteries throughout Tampa Bay.

Plus, it's important to point out that the following data only represents intersections with lights. So, you may notice some intersections (like Hillsborough and I-275), are actually listed here multiple times, because multiple streets converge in what appears to be the same spot.

There's actually a lot to unpack here. For starters, quite a few of Tampa Bay's big suburban intersections are well represented and are also some of the worst intersections in the area—we're looking at you Riverview, Brandon, and Largo.

But the most shocking revelation here is without a doubt Pinellas County's main  north and south artery, U.S.-Highway 19, which might as well be Fury Road. Of the 30 Tampa Bay intersections listed, which make up a total of 13,864 crashes, US-19 alone is responsible for 4,842.

If anything, this article will help you know where to avoid, and perhaps take another look at your insurance.
Scroll down to view images 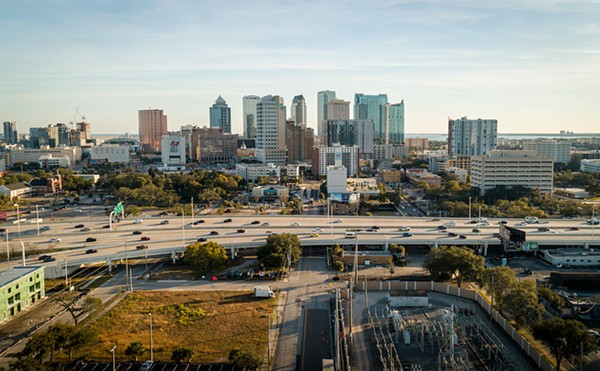