Tampa Bay's best restaurants of 2020, according to local chefs and foodies

I’m not sure about you, but March 20 feels like a couple of lifetimes ago for me. That was the day Gov. Ron DeSantis signed an executive order calling for all Florida restaurants and dining establishments to immediately suspend onsite consumption of food and alcohol. The order ushered in this new era of kitchens pivoting to takeout and/or delivery of meals and booze. Anyone paying any kind of attention to the news cycle knew the development was inevitable, and signs of the devastation coming to the local restaurant industry were already there.

A week before DeSantis’ announcement, Cigar City Brewing Hunahpu's Day—one of the biggest beer celebrations in America—canceled. Three days before that, I was on the phone with Tampa chef and James Beard Award semifinalist Ferrell Alvarez , audibly choking back his sadness, who told me that Proper House Group—which oversees his restaurants Rooster & the Till, Nebraska Mini-Mart and two Gallito taquerias—was laying off 41 of 53 employees. Since that day—through some innovation, but mostly grit and an unwavering belief that a company’s employees are what makes it great—Proper House Group has been able to rehire every one of those laid off employees who wanted their job back.

While other local restaurants also pivoted, with just enough success to stay afloat, that wasn’t the case for so many more. By September, as we all tried to figure out what positivity rates, new restrictions and a bungled response to COVID-19 really meant for the local restaurant scene, Creative Loafing Tampa Bay alone had already counted more than 30 restaurants—including iconic Clearwater concept Café Ponte, Ybor City staple La Tropicana and 40-year-old Skipper’s Smokehouse—that shuttered doors.

To put it bluntly, it’s been a nightmare year for restaurants and the people who love them. And while CL’s food critic Jon Palmer Claridge might normally use this week to definitively name the best restaurants of the year, doing such a ranking felt almost immoral considering what’s unfolded over the last nine months. So instead, CL asked Claridge and a few local chefs and foodies to share some restaurants that got them through, well, **gestures at the entire world.**

What follows is not a list or a ranking by any means, but a simple look into how and where you might find a good plate of food to make you feel a little bit better about what’s still unfolding in front of us. Be well, eat well, and don’t forget to try and do more for the folks who don’t have the luxury of wondering which local restaurants they can support this week.

Find out about our contributors for this list below, and see the print version of this story via cltampa.com/magazine. —Ray Roa

Chris Fernandez In May—despite having taken a huge financial hit and DeSantis’ opening of phase one—Red Mesa’s Executive Chef said he’d continue operating carryout until it was safer. That same month, Fernandez, who also opted out of St. Pete’s Fighting Chance Fund so even harder hit businesses could have relief, re-invented his concept by introducing Red Mesa Quatro test kitchen so his team could try twists on new dishes from Cuban sandwiches to pad Thai.

DJ Ku Four days after DeSantis’ March order, Tampa DJ Ku told CL that he lost his income to the coronavirus. He lamented the struggle he and his colleagues were going through, but in a way, he was OK with clubs trying to be safe. “The worst part of it all is that there's no definitive way of knowing how long this will last,” he said at the time. Nine months later, he gets a rapid coronavirus test weekly and masks up whenever he plays a rare gig. As this went to press, Hillsborough County put the kibosh on congregating on the dance floor, so we’ll see how it plays out for the club scene.

Ferrell Alvarez On March 18, Tampa chef and James Beard Award semifinalist Ferrell Alvarez’s Proper House Group—which oversees his restaurants Rooster & the Till, Nebraska Mini-Mart and two Gallito taquerias—laid off 41 of 53 employees. Since that day, Proper House Group has been able to rehire every one of those laid off employees who wanted their job back.

Jenn Thai When it comes to safe dining and supporting local restaurants during the COVID-19 pandemic, Jenn Thai, a Bay area blogger who posts about food and occasionally style and beauty pretty much got takeout ordering strategy down to a science—”the less amount of contact, the better,” she wrote to Tampa Bay. Here are her picks for the top five local making ordering and picking up food a stress-free experience.

Jeffrey Jew Last month, in response to COVID-19, Jeffrey Jew pushed the opening of his new St. Pete restaurant, Lingr on 6th St, back. While Lingr—which will serve Nordic and Asian-inspired food—gets outfitted with new technology to enhance safety, Jew has opted for takeout during the pandemic, but these were some of his favorites before it all went to shit. Still, he’s optimistic. “Restaurants I can’t wait to get back to and new ones to try: Brick and Mortar, Rooster & the Till, Alto Mare, Baba, and Rococo,” Jew wrote to CL “New ones I can’t wait to try are Rocca, Wild Child, Urban Stillhouse and Sea Worthy Fish + Bar.”

Joe Dodd Mr. King of the Coop has been busy tweaking a gluten-friendly fried chicken recipe, and he told CL about his pandemic go-tos.

Suzanne Crouch In April, chef Suzanne Crouch was tapped by James Beard winning chef Edward Lee to take part in the Lee Initiative’s Restaurant Workers Relief Program, which provided grant money so that Crouch’s kitchen could provides meals and provisions to laid off hospitality workers every night from 5 p.m.-7 p.m., for 21 days straight. A month ago, Cass St. Deli’s founding chef moved to Rocca (a hands-down favorite of 2020 among those who spoke to CL) where she’s been finding peace by making some of the finest bread and pasta in Tampa Bay.

300 Beach Dr NE, St. Petersburg
I love the food Chef Josh does over at Annata and Alto Mare Fish Bar. The flavors are so clean, the technique is great. The house made charcuterie is a must get, I love his crudo plate plate, and his pastas are the jam. Everything is always super-balanced with good spice, salt and sweet; it’s always fun going here to share a bunch of dishes. —David Benstock
Photo via altomarefishbar/Facebook

Antojitos (2302 W Columbus Dr., Tampa), Mi Tierra Latina (6802 W Hillsborough Ave. no 14, Tampa)
Every Friday I go to Antojitos or Mi Tierra Latina for Colombian food with my pops. We always get a fresh, natural juice and then typically sancocho to eat. It's delicious and heartwarming. The people working at those restaurants are so grateful and genuinely kind. I guess I love this place because not only is the food good but it's an hour and a half of family time for me in every sense, which I'm trying to focus more on these days. —Ferrell Alvarez
Photo via AntojitosTampa/Facebook

Bern’s Steak House (1208 S Howard Ave., Tampa),Haven (2208 W Morrison Ave., Tampa)
Haven and Bern's are always in my rotation. David [Laxer, son of Bern's Steak House's founders, Bern and Gert Laxer], Brooke [Palmer Kuhl], Hab (Habteab Hamde), Chad [Johnson] and Courtney [Orwig] have my utmost respect and I support them at both locations. Bern's is a huge driver for wines for us, and Haven is delicious and we love sitting outside in the courtyard. —Ferrell Alvarez
Photo via BernsSteakHouse/Facebook

The Florida State Fair is nearly two weeks away and the highly-anticipated menu has officially debuted. Outside of the trademark deep-fried Oreos…

From speakeasies where a password is always required, to laundromats that are actually great watering holes, and no-frills lounges that are way…

[image-4] Busch Gardens brought Big Easy cuisine and entertainment to Tampa a little early with Mardi Gras. But the beads and bites…

[image-51] In spite of the last two years taking so many beloved restaurants away, some local chefs and restaurateurs have found ways…

The past two years have been incredibly tough for local restaurants and bars, and while many have survived, adapted, or even completely… 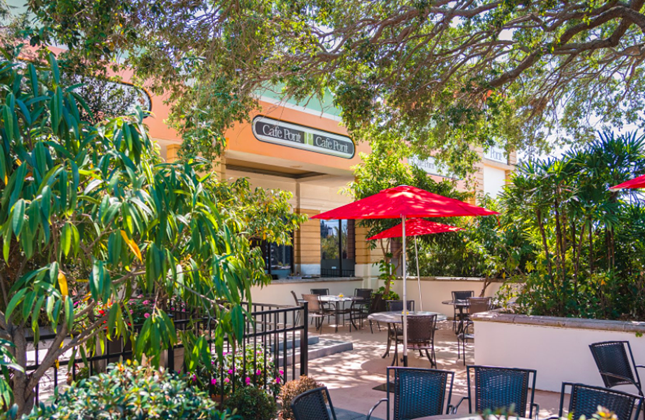