Late Friday afternoon, after convening less than a mile away at Lowry Park, Black Lives Matter protestors marched to the nearby Riverbend neighborhood and the home of Tampa Mayor Jane Castor

The march through Florida’s stifling heat—organized by a coalition of members of the Black Collective Movement, Loud for Justice, and Black N’ Tampa—was a diversion from organizers’ original plan to protest the arrival of President Donald Trump in Tampa the same afternoon.

Earlier in the week, lead organizers the Black Collective Movement (BCM) told Creative Loafing Tampa Bay, “We want to have an empowering and exhilarating event that the president of the United States cannot ignore.”

But details regarding Trump’s local itinerary—which included meetings with Florida Sheriffs and anyone wealthy enough to secure tickets for the high-priced campaign fundraiser in Bellair—were largely kept under wraps until Thursday.

The late release of Trump’s whereabouts left little time for protest organizers to develop a safe gameplan. So on Friday morning, BCM Tampa’s Instagram page used a since-deleted post to announce a change of plans, citing safety concerns and a lack of time to scout the location of Trump’s fundraiser.

This emphasis on safety remained evident throughout Friday’s action. Organizers repeatedly reminded allies to not engage with, or antagonize, those coming at them in bad-faith opposition—which manifested throughout the day in the form of several hecklers, a few testy drivers, religious zealots, and pro-Trump counter-protestors.

Engagement with these bad faith parties occurred regardless, however—they thankfully did not lead to any known violence.

In addition, a small team of local medics known as Black Life Support, at least one clearly-identified legal observer, and Tampa’s very own Wall of Vets—inspired by the line of protection formed to protect protestors against use of force in Portland—also contributed to the management of safe protest landscape.

“Please do not do anything to harm anybody,” organizers said to about 100 gathered protestors at Lowry Park. “We don't want anything broken. We're not here for that. So please respect that. And if you're here for other intentions, please leave now.”

Departing from Lowry Park, the organizers asked the Wall of Vets to march at the front of the crowd, with allies in the middle, and Tampa’s self-identified Wall of Moms and dads at the back.

Upon reaching Castor’s Riverbend home, it was evident early on that the mayor was not home—an undercover cop, however, silently watched the crowd of protestors from inside an unmarked police vehicle. This cop did not engage with protestors, and vice versa.

“Come outside, Jane, come outside!” the group chanted.

The group of protestors departed from Castor’s home just before 6 p.m., moving back towards Sligh Ave. In an effort to avoid police kettling—a policing tactic that traps large crowds, and can endanger protestors—the group largely stuck to the main roads, weaving out of the smaller streets of nearby neighborhoods.

Protestors then proceeded to park themselves at the intersection of Sligh Avenue and North Boulevard, where they remained for over two hours. Over this period, protestors at times blocked off the intersection, allowing space for single lanes of cars to come through—with traffic directed by the aforementioned Wall of Vets and BCM organizers. Similar to most protests on Tampa streets since May, solidarity honks from drivers and raised fists far outnumbered displays of opposition.

However, in an unexpected turn of events, Friday night protestors were also met with two bullhorn-wielding religious zealots—one of whom, in their most coherent moment wailed, “You have so much hate in your hearts”—and a handful of counter-protestors that, if their white supremacist flag is any indication, appeared to belong to some form of Tampa hate group.

What was not unexpected was the TPD presence, which came in the form of a couple police SUVs and multiple TPD officers parked on North Boulevard.

“Who do you serve?,” protestors asked officers, most of whom largely kept to themselves, silently watching protestors from within their vehicles or standing in a linear formation outside. A couple TPD officers, including Officer Eric Delefice, engaged in discussion with BCM organizers, evidently heated but removed from the general crowd.

What else happened at the Sligh Avenue intersection over the course of the final two hours? In the tradition of many Black Lives Matter protests, attendees kneeled for a moment of silence to recognize the premature loss of Black lives, including that of Jonas Joseph—a 26-year old Black man who was fatally shot by Tampa police in April of this year.

At one point, a MAGA hat was also lit on fire in the middle of the intersection, garnering cheers.

The energy throughout the afternoon and evening did not waver, and even as exhaustion blanketed the crowd by the end of the evening, the air still buzzed with the impassioned speeches of hours before and the tenacity demonstrated in earlier facedowns with TPD officers and counter-protestors.

BCM organizers officially announced their departure from the protest a little after 8 p.m. as a small crowd stuck around to face-off remaining counter-protestors and TPD.

Tampa’s racial justice activists have repeatedly expressed disappointment and frustration with the words and actions of Castor since the resurgence of Black Lives Matter protests in May.

Castor, who previously served as Tampa’s Chief of Police, has refused to meet demands from activists, including calls to fire current police chief, Brian Dugan. Dugan has been criticized for disparaging local protestors on both local and national television and for calling on people who were unhappy with protestors to “step up and complain”.

“I would call that inciting a riot,” one organizer said outside Castor’s home, to snaps and applause from the crowd. Under Dugan’s leadership, the use of force by TPD has increased 24%. The phrase “Dump Dugan” has become a recurrent chant during local Black Lives Matter demonstrations.

TPD has also failed to publicly follow up on Tampa Bay drivers who have ploughed through crowds of protestors on several occasions in the past month, including one an alleged Tampa Police Academy student who drove through a group protestors on the Fourth of July. St. Petersburg Mayor Rick Kreisman recently felt the need to remind constituents that running over protesters is illegal.

Moreover, activists are also dissatisfied with Castor’s proposed changes to Tampa’s Citizen Review Board, which has been described by CL activist-journalist Kelly Benjamin as a “sham” board comprised of members appointed mostly by Castor herself rather than, say, the Tampa City Council. Tampa activists also feel that Castor has not taken their concerns and demands for action seriously, evidenced by an alleged aloofness in her meetings with them and a perceived lack of sincerity.

At Friday’s protest BCM organizers also spoke on the need to address the prevalence of houselessness, gentrification, food insecurity, and economic struggle in Tampa’s most marginalized neighborhoods.

“At the end of the day, every single part of the system is broken,” an organizer said. The Black Collective Movement is one of the more visible groups in Tampa that openly identifies as a group of prison industrial complex (PIC) abolitionists, guided by approaches of reformative and transformative justice.

“We don’t need reform, we need abolition,” BCM members say, sharing their vision for a reinvestment in communities and the development of a public safety system decoupled from inherently oppressive (and historically racist) characteristics of the existing U.S. police state.

Despite the protest not turning out to be the explicit “No Trump, No KKK, No Racist USA” event as planned, anti-Trump rhetoric pervaded the day’s messaging.

Earlier this week in their email correspondence with CL, BCM members said, “Protesting is a profoundly powerful thing, as it forces the world to hear the unheard and allow us to bond during a collective movement as a community.”

“We are most hopeful in the power of solidarity.” —McKenna Schueler

UPDATED: 08/01/20 2:15 p.m. Updated with a report from McKenna Schueler and photos from Dave Decker. See our original blurb below.

A full report and more photos are still on the way, but Creative Loafing Tampa Bay contributor McKenna Schueler followed Black Lives Matter protesters Friday afternoon as they—along with a Tampa-based Wall of Vets—marched to Mayor Jane Castor’s home in the Riverbend neighborhood near Lowry Park. CL photographer Javier Ortiz counted just under 100 people at the mayor’s residence where an undercover cop car stood guard. The march moved from Castor’s home to Sligh Avenue where police officers met protesters who worried about kettling but ultimately played it safe and even let traffic through the intersection of Sligh Avenue and North Boulevard. Most protesters called it a night just after 8 p.m. Look for more images and a report in the morning. See photos from Ortiz above. —Ray Roa

Photos by Javier Ortiz and Dave Decker https://www.google.com/search?q=Javier+Ortiz+and+Dave+Decker
Scroll down to view images 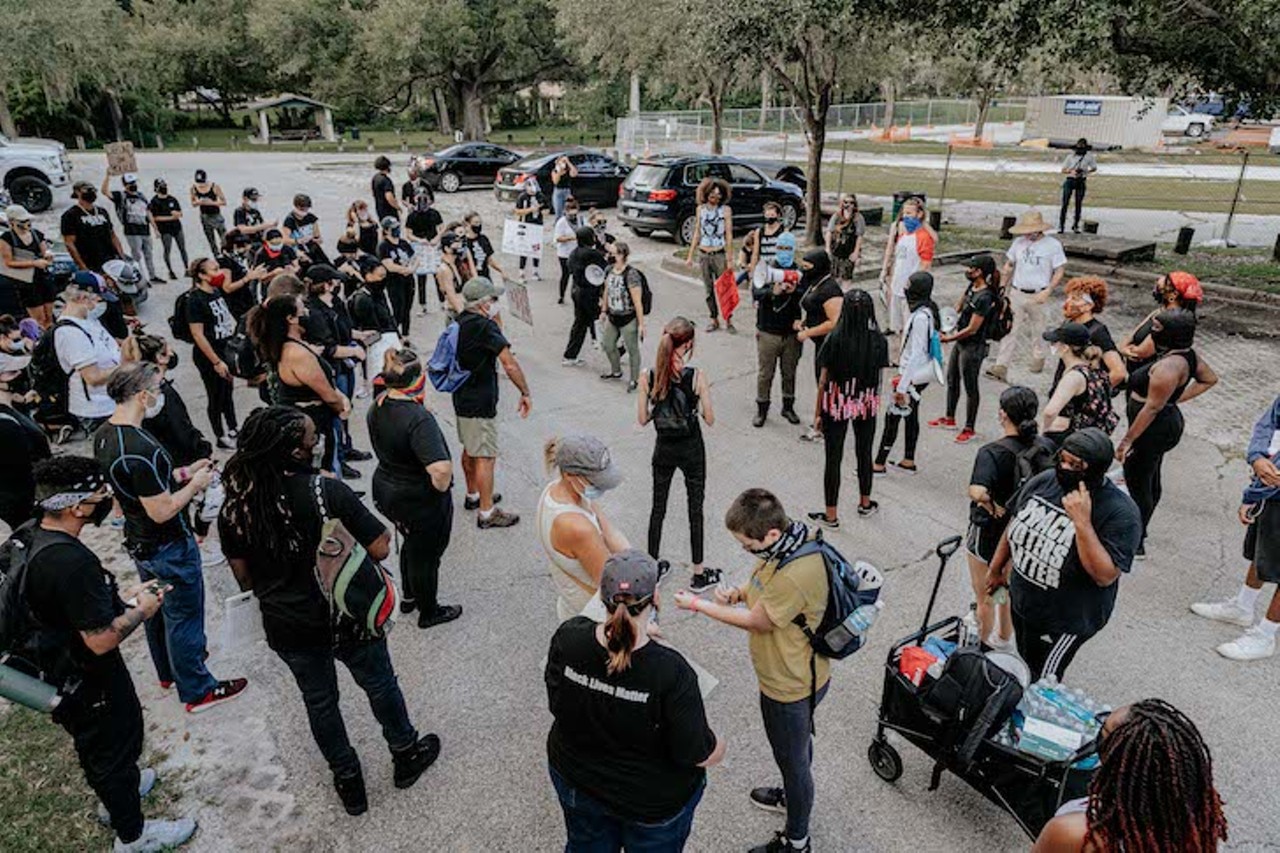 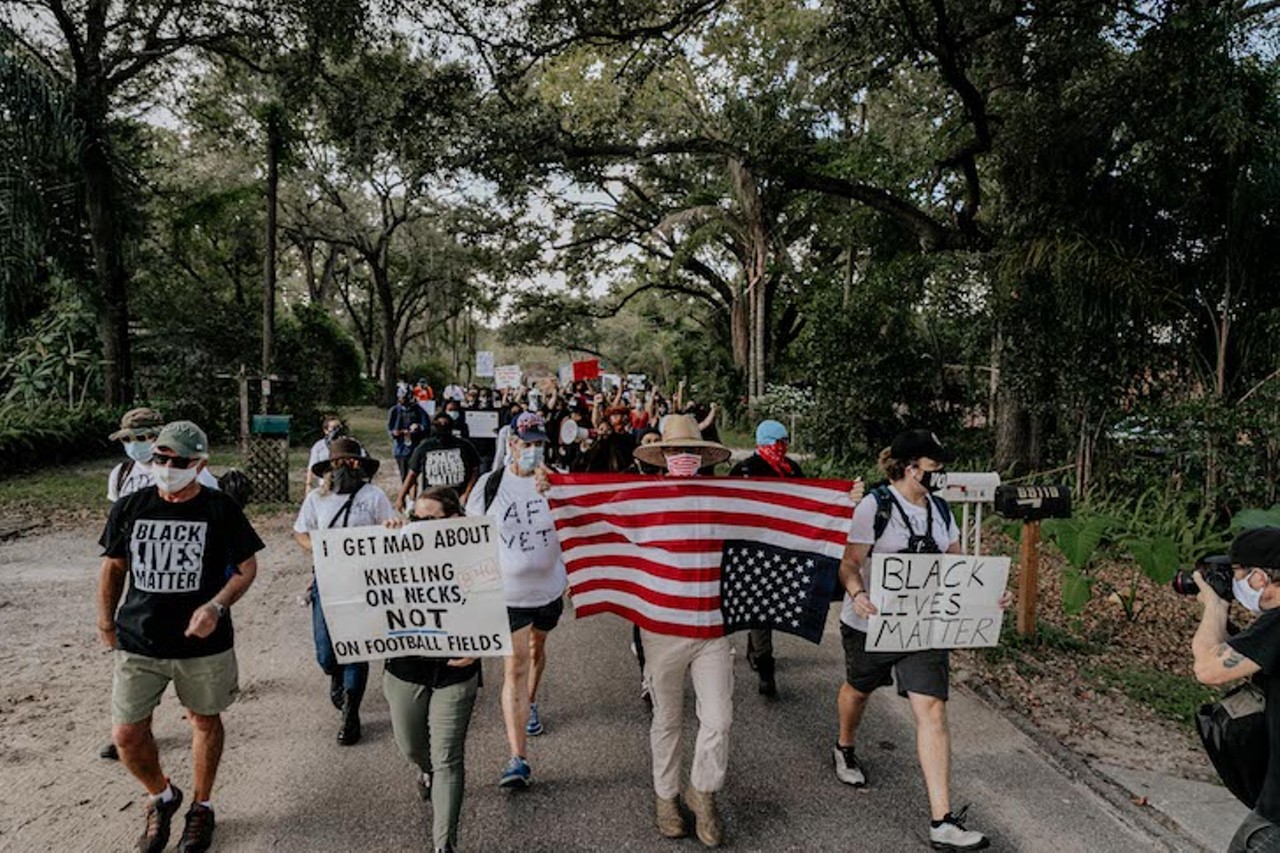 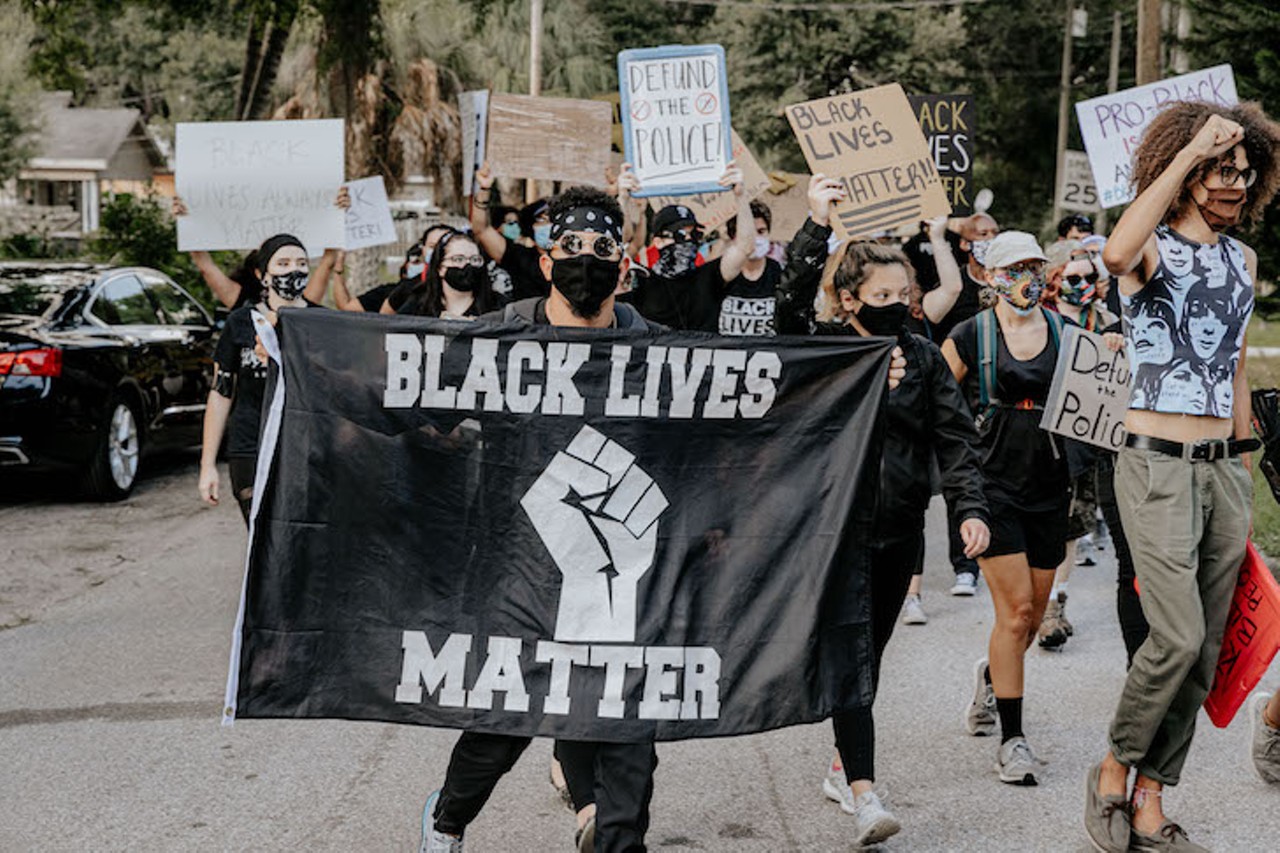 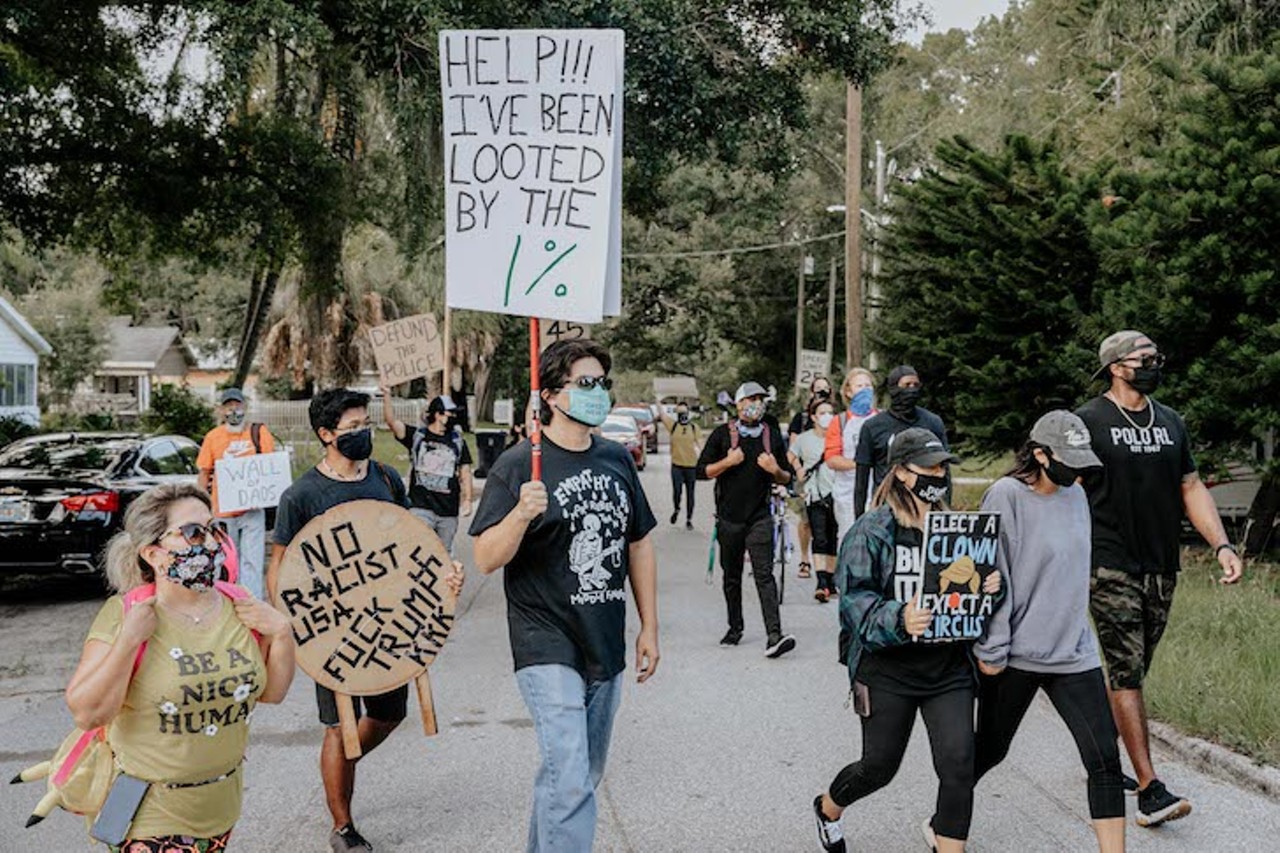 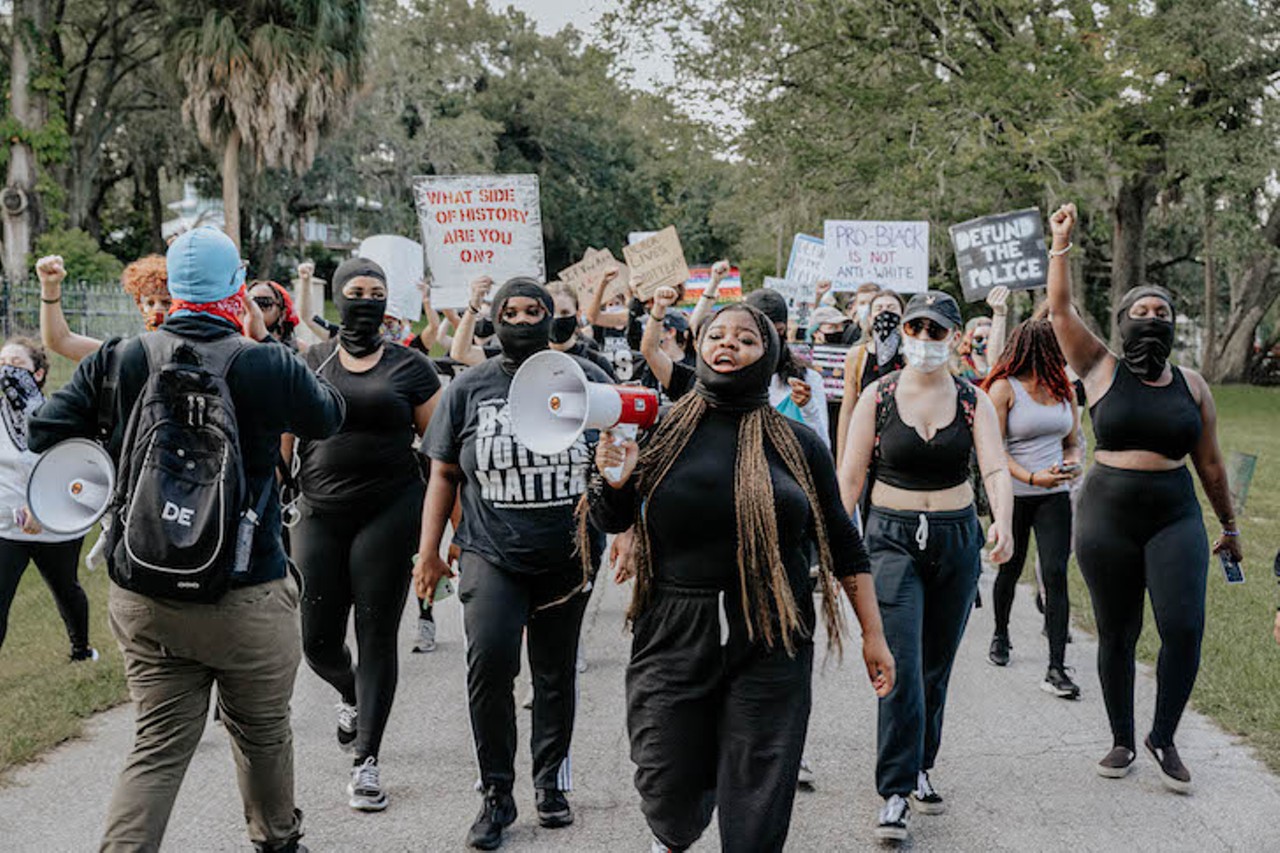