When I arrive at Fairmount Park Elementary Tuesday morning, Ya La’Ford’s hands are already covered in paint. She’s surrounded by a cluster of rather well-behaved small children. All of them are black. This isn’t unusual for south St. Petersburg, which historically funneled African Americans into neighborhoods south of Central Avenue via housing discrimination. Still, it’s odd to see a school looking so segregated in 2018.

Fairmount Park wasn’t always this way. It used to be fully integrated, with a student population that was about 30% African-American. Then Pinellas County abandoned integration in 2007, and Fairmount Park’s student population soared to over 80% black. The Tampa Bay Times called it “de facto segregation,” and its effects on south St. Petersburg elementary schools have been horrendous.

Separate but equal doesn’t work. Research shows that quality teachers are the most important factor in a student’s academic success. Unfortunately, high minority schools don’t always attract the most experienced teachers, and it’s the students who suffer. Fairmount Park, which had an “A” rating in 2007, had become the second-worst elementary school in the state of Florida by 2015.

When Sara Black hears her students say they go to a bad school, she tells them, “I don’t see a bad school.” Black — who is white — sees a lot of great teachers working hard to turn things around for the students of Fairmount Park. She’s only been there for one year; she was recruited by Principal Kristy Moody in 2017 to teach art.

Though many Fairmount Park students have struggled with math and reading, there are many who’ve found success with art here.

“A lot of positive things are happening with art here,” says Black. “Pinellas County has quite a few art exhibits during the year... The kids love the recognition and being given the opportunity to share.”

This year, Black further upped the school’s art game when she recruited Jamaican-American artist Ya La’Ford to paint a mural with Fairmount Park students. After being awarded a grant through the county for supplies, Black reached out to La’Ford through a friend. She had considered several artists for the project, but Black thought the kids would relate more to La’Ford than some of the others.

Many of the kids here have never seen someone that looks like them be successful, La’Ford says. Most come from low-income families, and are on free or reduced lunch. When La’Ford told them what she did for a living, they were in awe. “Wow, you’re an actual artist? You’re allowed to paint on the wall?” they asked her.

Yes, she is allowed to paint on the wall. La’Ford has a BFA from Florida State University in painting, an interdisciplinary MFA from the Art Institute of Boston, and a law degree from the University of Florida. When she’s not mentoring struggling kids at local schools, she’s teaching classes at the University of Tampa and St. Petersburg College, and showing her work in art galleries and museums around Florida and beyond. So yeah, she’s a real artist. And this isn’t the first wall she’s been invited to paint in St. Pete. During the inaugural SHINE festival in 2015, she painted “The Rays Tunnel” that runs under 1st Avenue South between Ferg’s Sorts Bar and Tropicana Field. The following year, she added “Golden Wave” to the back of the Morean Arts Center. She worked with MYcroSchool Pinellas students in 2016 to paint the north wall of the historic Manhattan Casino, and this September she’ll showcase student artwork in another mural at the Morean.

This morning, La’Ford is directing the children’s portion of the mural in the school’s courtyard. It’s unusual for these kids to get this much one-on-one time with anyone, La’Ford says, and she’s happy to be there for them.

La’Ford outlines the areas to paint with blue painter’s tape — each empty blue rectangle saving a spot for a Fairmount Park student to leave their mark. There are already several lines painted across the wall in blue, red, green and yellow. Now, she’s helping a student leave his handprint at the end of one the lines. She holds him gently by the wrist, pushing his hand into a plate of red paint. Then she guides his hand to the proper place on the wall and helps him hold it there long enough to leave a good, solid print.

One of the older girls is carefully painting her line in yellow. She turns to La’Ford to see if it needs more paint. Other students sit quietly in the courtyard, waiting their turn. It’s everything you’d hope to see at a struggling school. The kids are clearly enjoying this awesome art project. One of the boys is having so much fun he refuses to return to his classroom at the appropriate time, and I can’t say that I blame him. Painting a mural outside is surely more fun than doing math worksheets in the classroom. La’Ford gives the boy three chances to change his mind, but then she has to walk him to the office. He doesn’t protest. A couple of minutes later he returns to apologize. The entire episode belies the reputation given to schools like Fairmount as “violent” places.

We continue our conversation. La'Ford has a lot to say about the educational power of art, and I’m all ears. She’s taught the kids about composition, technique, color and abstraction, as one might expect. But a large project like this is about more than just art.

“Part of being an artist translates to any job,” La’Ford says. A mural has to be planned, and it’s often hard work to execute. A wall is a large canvas to cover.

La’Ford walks the children through the planning stages and makes sure they follow through, giving them important skills that will serve them well in life. And it’s hard to argue with the results. With the help of a caring professional artist/mentor, these kids have created a beautiful work of art, and that’s important.

“This is our future,” La’Ford says. “This is what really counts.”

Once the children’s portion of the mural is complete, La’Ford starts to weave some of her own artwork through it. The school can’t really afford to pay for La’Ford’s portion of the mural, but sharing her artwork with these kids is more important, she says. “There is something special about collaborating — it shows the power of love and creativity.”

Entering through the main gates of Fairmount Park, this mural will be one of the first things people see. La’Ford’s lines intertwine with the children’s lines, showing how we’re all “intertwined and connected in a beautiful way.” It’s a not-so-subtle reminder of the fact that these children, with the help of the community, can be successful.

“When you work together,” La’Ford says, “it creates something that is so beautiful.”

Finally, after years of being associated with failure, Fairmount Park’s getting a long-due taste of success. The school’s grade went from an F up to a D in 2016, and that D is holding strong. This may not seem like much, but for the students and staff of Fairmount Park, it’s kind of a big deal.

“What people don’t seem to realize,” says Black, “is that you have to have failure, especially in art, before you can have success.”

La’Ford arrived at Fairmount Park at sunrise every morning for a week, just to teach the kids of Fairmount Park what it takes to be successful in life. She stood in that courtyard, and taught and painted for hours with these kids. And in the end, they created an extraordinary mural together.

It is La’Ford’s hope that every day, when they walk past this mural, the kids of Fairmount Park will remember how planning and hard work are linked with success.

Jen Ring discovered her love of writing through the lens of a brand new camera. When she’s not taking photographs, she’s writing about taking photographs and other fun things to do in the Tampa Bay area. Check out her Photographer’s Notebook for photography tips, tricks, and pics, and subscribe to her newsletter to follow her other adventures. 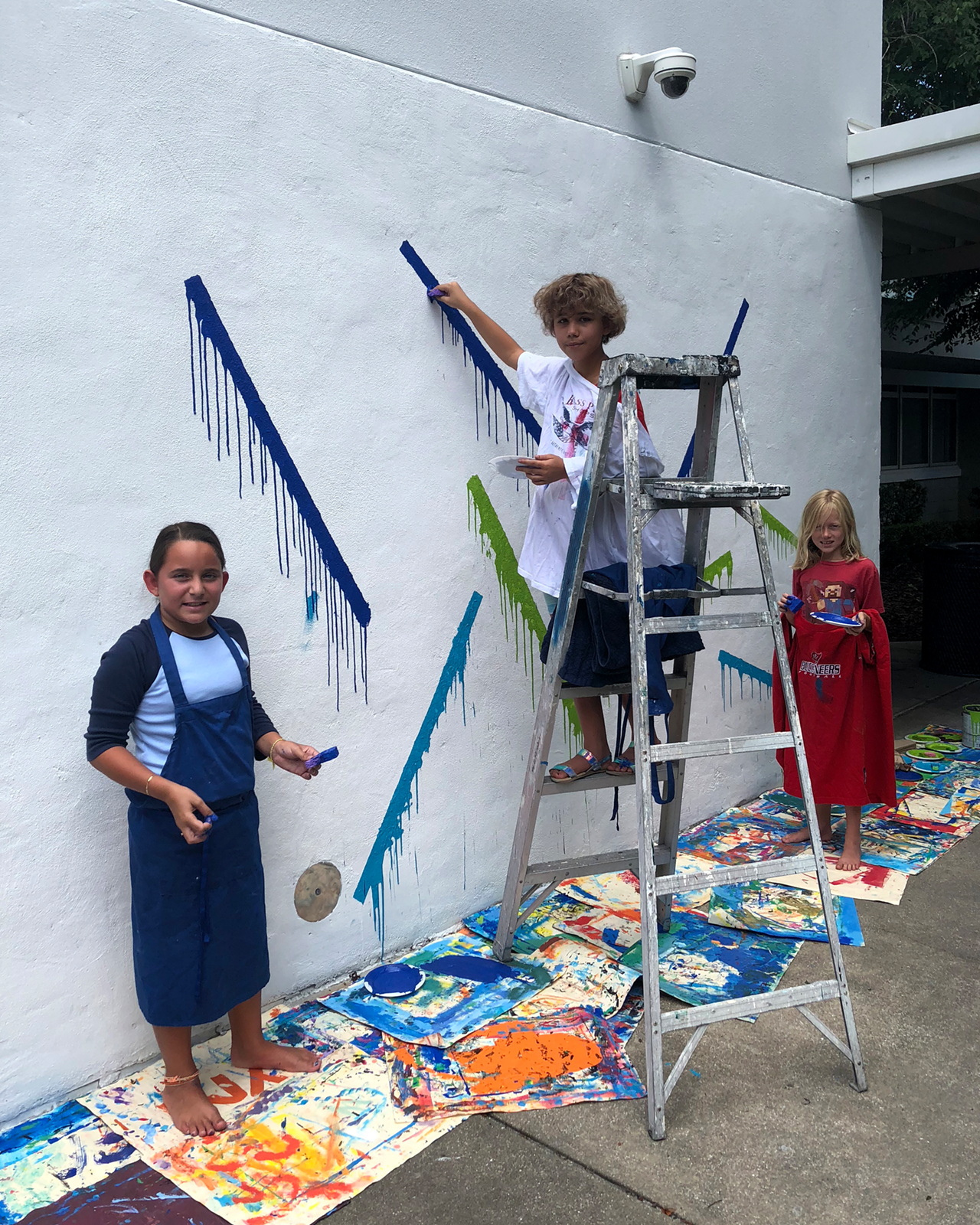 St. Petersburg is a city that has used the power of public art to foster community

For Florida natives, it's easy to become disenchanted when you go to your favorite beach or spring and have no luck finding…

Summer is here, and while these beaches stay hot year round, it's time to kick back and stick your toes into the…

It's only getting hotter in Tampa Bay, so we put together a few activities to safely occupy your time, either in the…

From new thrill rides, to berry season, and spring hopping, Tampa Bay is full of cool summer activities. Here are a few…