A night at Shephard's, where the beach buzz never dies 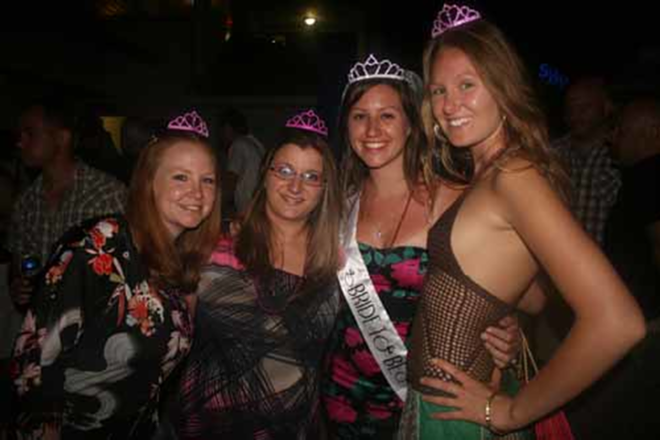 11 p.m. on Clearwater Beach. Women in sundresses dampened by the bikinis underneath and men in Ed Hardy clothes bedazzled like figure-skating outfits wander in front of headlights, clutching solo cups and to-go containers. They mindlessly funnel down the streets, herded by the pulse of bass and drunken howls erupting from Shephard's.

On Clearwater Beach, Shephard's is the nighttime counterpart to Frenchy's. It draws a motley crew of locals and vacationers who have one thing in common: an appetite to keep their beach buzz going.

The cover is $7 for Florida residents and $10 for everyone else. But this is probably the only cover you'll pay all night; there are other bars on the beach, but Shephard's is the club scene.

Clusters of vacationers glow with sunburns and rum. Young women buy drinks for their moms. A live band alternates with a DJ playing a set-list stolen from a second-chance prom; the dance floor explodes during "Sweet Caroline" and "YMCA." Newly remarried couples grind like teenagers. Two sets of bachelorette parties mingle with a younger couple still dressed in what they wore to their beach wedding. Shirtless men make me feel insecure about my severe lack of gold, tattoos and facial hair. The sea breeze abates the body heat. Two slices of beach offer an escape from the throb of bodies, a place to take short walks in the moonlight and watch solitary drunks swimming in their shoes.

Alone, I make it a point to hit on as many women as possible under the guise of a journalist covering Clearwater's club scene.

"Is there any other bar on the beach I should check out?" I ask them all.

Most vacationers don't know and don't care to find out. Shephard's is enough. The locals tell me about other night spots, but they always describe these as having relaxed vibes or being more of a daytime thing.

Some frisky cougars in town for a business conference circle me, taking turns kissing my cheek. Several hundred miles from home, and many drinks away from their daytime personae as professionals, moms and wives, they are in party mode. One introduces herself as Kitten and renames me Tiger for the night.

Jessica and Alyssa, accountant students from Minnesota, sit with their backs to a cluster of 40-year-old men.

"The beach here is amazing," Jessica says, dodging a huge umbrella knocked down by an unbalanced dancer. "But our hotel is swarming with old people."

Alyssa offers me a sip from a bucket sloshing with a frozen daiquiri and makes me promise to come back before the 40-year-olds start asking them to dance.

I get distracted ordering a beer beside a tall, attractive blonde. Sigga is a flight attendant from Iceland. She and her older friends appear to be collecting empty margarita cups on the bar. I keep trying to ask her highly intellectual questions like, "So, do y'all have beaches in Iceland?"

I don't know if it's the music, the language barrier or the drinks, but Sigga keeps responding with, "Why is your shirt still on?"

This is how I too became a shirtless douche on the dance floor, though I feel justified as I'm being moderately groped by a woman who could be a former Swedish bikini team model.

The Icelanders are outraged that the bar closes at 2. Their party hearts break a little more when they discover that retailers stop selling alcohol at midnight, and again when I inform them that all the "after-parties" they keep getting invited to involve small huddles of dudes sitting around hotel rooms eating stale nachos and drinking Jim Beam.

"In Iceland we don't go home until the sun comes out."

"You should come skinny-dipping," Sigga says, looking for her friends who have walked barefoot a few blocks down the sidewalk to their hotel. "Tomorrow, you come and we'll swim."

For all its promise, this is the tragic flaw of meeting hot vacationers at Shephard's. The friends of your romantic interests aren't cool with a strange, shirtless guy coming back to their shared hotel room. Suddenly I'm the one wandering in front of headlights, searching for a place to be.

Click here to return to the Summer Guide 2010: The Beaches