Becky Flanders takes the piss out of gender roles 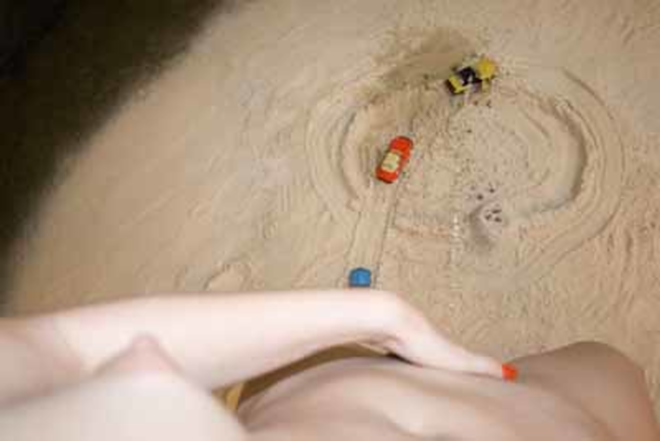 In Western art history and American pop culture, the female body has long been an object of much admiration. Venus de Milo. Manet's Olympia. Marilyn Monroe. Kate Moss. But as much as we love to contemplate a great rack or slender pair of legs in marble, oil paint or flesh, one area of the female body remains utterly taboo.

Oprah calls hers "my vajayjay."

In her first solo show, Becky Flanders, an artist and third-year grad student in USF's MFA program, debuts a series of photographs that aren't shy about exploring female anatomy. The images — almost all of which are arrestingly explicit — cast Flanders as a kind of 21st-century Judy Chicago, daring to be earnestly feminist no matter how uncool or uppity others may accuse her of being. An audience of younger women, in particular, will recognize her tone: decidedly post-porn, with the cheek of Bitch (the magazine) and the sex positivity of Babeland (the erotic toy store). In large-scale color photographs that showcase the artist as performer, Flanders' nether regions function like a pussy-sized Robert De Niro, demanding of the viewer, 'You talkin' to me?'

At the heart of the images lies her interest in female standing urination. The practice — perversely literal in its demand for gender equality — smacks of childhood obsession, with a kinky adult twist. Achieving the feat of peeing upright entails a certain amount of digital manipulation of the artist's genitalia; as a result, just about everything that's down there gets its day in the sun. In one 4-foot-by-5-foot print, Flanders urinates in costume as a rococo Marie Antoinette, pissing into a Fabergé egg. In another, she plays a sort of Venus of Willendorf nude figure, mysterious and powerful, with her face obscured by a honeycomb mask.

Playful and beautiful, yes (and the irreverent repurposing of feminine icons is particularly enjoyable) — but at that scale, the images don't leave much to the imagination, anatomically speaking. A third, based on Georges Bataille's notorious novella, The Story of the Eye, dispenses with the urination; Flanders simply inserts a fake eyeball into the mouth of her vagina and photographs herself with legs spread against a dramatic red backdrop.

"You need to be confronted with an almost life-sized body and see the details with it," she says.

A series of smaller pictures — small enough to require viewers to get up close and personal — toy with the psychoanalytic concept of a link between male standing urination and all-powerful sadistic fantasies. Overlooking a cluster of hapless cars or planes, Flanders, in the role of nude female colossus, mercilessly lets loose her stream. In another image, she pisses into the eye of a skull mask embedded in the ground. Think King Kong with PMS.

Two bodies of sculptural work flesh out the exhibit's themes. To complement her photographic endeavors, Flanders offers pairs of pants for sale that are modified to enable convenient standing urination for women; a how-to guide provides instruction for visitors ready to take the leap. Her very latest works revolve around the notion of surgically enhancing male genitalia for female pleasure — a thought that would be funnier if not for the popularity of aesthetic vaginoplasty. Delicate porcelain implants intended to function as clitoral stimulators appear utterly innocuous, but like most of Flanders' work, they'll burrow into your brain and fuck with your ideas about sex and gender.

Aside from all the differences-between-girls-and-boys baggage that her artwork kicks up, the most affecting question raised by Flanders' exhibit takes us back to that forbidden strip of female flesh — a question I struggled with while writing this column and perhaps you, reader, struggled with while reading it:

Just what is it that's so disturbing about a vagina?