Richard Howard/oceanofimages.com via CMA
Last year, more than 1,000 manatees died in Florida, setting a grim record in the state’s history. So far in 2022, over 450 have been found dead from various causes.

“What has happened over on the east coast of Florida last year and this year is a consequence of nutrients flowing into the Indian River Lagoon—making a perfect situation for algal blooms,” CMA’s Dr. James “Buddy” Powell said. 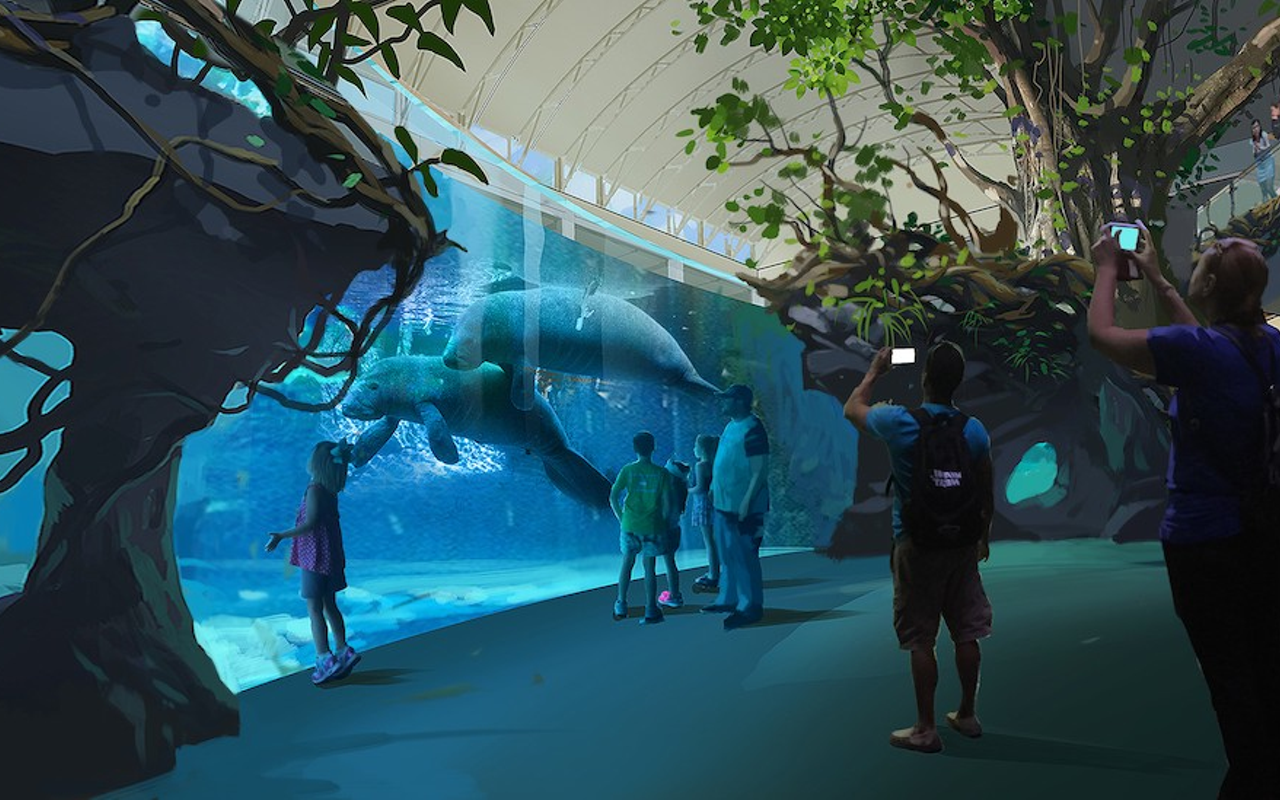 Powell explained that these algal blooms cut down the clarity of the water and cut off sunlight to growing seagrass, which dies off as a result. Seagrass is the main food source for manatees. So, when manatees came to these warmer waters during the winter months, there was little to no food and many starved.

While the Manatee Survival Plan is in direct response to the Unusual Mortality Event (UME) of the marine mammals, the aquarium’s Dr. James “Buddy” Powell also points to the importance of carrying on Winter the dolphin’s legacy.

“Winter was such a wonderful ambassador,” Powell said of the "Dolphin Tale" star who inspired millions before dying at the age of 16 late last year. “She was rescued herself. What better way to pay tribute to Winter and her legacy…to use that good will and everything she brought to Clearwater and Clearwater Marine Aquarium to do more for the rescue and rehabilitation of other animals.”

Winter died on Nov. 11, 2021, and was beloved in Clearwater, Florida and around the world for her inspiring rescue story that saw her thriving after the loss of her tail.

“What a wonderful legacy for Winter to have provided us who we are now and the opportunity to be able to do something like that,” Powell said. “It’s building on the foundation and legacy of Winter…and we’re just doing more and inspiring and educating people along the way.” Celebration of life for ‘Dolphin Tale’ star Winter set for this weekend at Clearwater aquarium: CMA will remember Winter and fundraise for research with reduced admissions.

The aquarium’s plan to help manatees includes three phases. The first includes working with the city of Clearwater to open a temporary emergency rehabilitation pool at the aquarium to offer more “bed space” for manatees in need of care.

“We are excited to work with Clearwater Marine Aquarium to help them add a rehabilitation pool to their facility. They have always had the mission of rescuing, rehabilitating and ultimately releasing marine life and now they need to focus those areas more on our local manatees,” City Manager Jon Jennings said in an email to Creative Loafing Tampa Bay. “Unfortunately, Florida’s manatees are suffering at record numbers and last year alone we had 1,000 manatee deaths. As a community we need to do what we can to rehab and release this iconic yet vulnerable Florida species.”

The second phase is working with the city of Tarpon Springs to expand rehabilitation efforts at Fred Howard Park by opening three manatee pools at the Marine Mammal Stranding Rehabilitation Facility. The aquarium hopes to open those pools within the next year, and a funding request of $3 million has already been sent to the Florida state legislature.

The city of Tarpon Springs said the aquarium recently submitted plans for permitting and that they “look forward to working with them through the permitting process.”

c/o CMA
The second phase of CMA's manatee rehab and rescue effort is working with the city of Tarpon Springs to expand rehabilitation efforts at Fred Howard Park by opening three manatee pools.
The third phase is the most intensive but one that Powell said is “core” to the aquarium’s mission. CMA is currently raising funds to build a new $10 million manatee hospital in the former home of Winter the dolphin.

According to a release from the aquarium, the project will be a “critical care facility capable of accepting the continued influx of manatees affected by habitat loss, red tide, boat injuries, cold stress syndrome and abandoned sea cows.”

“That will become a grander plan, a master plan, to create a habitat for manatees,” Powell said. “The older Winter zone can be modified; that’s perfectly adequate for housing manatees and manatee rehabilitation. It’s also an opportunity…it’s integrated into a whole educational piece.”

With the ongoing manatee mortality crisis not expected to let up anytime soon, CMA isn’t the only facility to ramp up efforts to help the state marine mammal of Florida.

SeaWorld has also set up emergency pools and has been working alongside CMA, the Florida Fish and Wildlife Conservation Commission and the Manatee Rescue Rehabilitation Partnership. The Georgia Aquarium also stepped in in mid-March to announce it joining with the partnership to help care for two orphaned young manatees.

For those wanting to help manatees in the Tampa Bay area and around the state, Powell suggests simple things like slowing down boats and being more mindful of when to use fertilizer on lawns—or “zero-scaping” and avoiding any fertilizer that could make its way into waterways via rain runoff.

He also advised to be cognizant and supportive of local and state legislation that tries to reduce the amount of these pollutants getting into our natural water systems.

“With all these manatees dying…it’s brought international, national, local awareness,” Powell said. “People say ‘oh manatees are like the canary in the coal mine, the big gray canary.’ But that’s not actually true. By the time this big gray canary dies, everything else is gone.