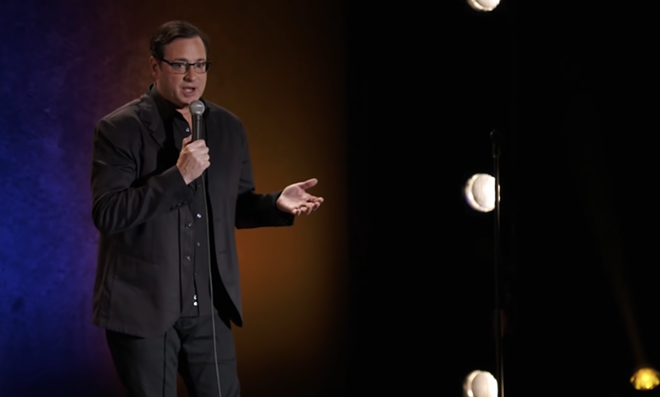 Comedy Dynamics/YouTube
It has been just three months since the 65-year-old played th Improv in Ybor City.
On Sunday, Orange County Sheriff's Office said that comedian and one of America's most memorable sitcom father figures, Bob Saget, was found at the Ritz-Carlton Orlando.

No signs of drugs or foul play are suspected, but it has been just three months since the 65-year-old played th Improv in Ybor City.

Bob Saget talks Norm Macdonald and why coming to Tampa for stand up 'truly is a gift': He's at Tampa Improv tonight and tomorrow.

Before his Tampa appearance, Saget caught up with Creative Loafing Tampa Bay to talk about his friend Norm MacDonald, who had just passed away. In his interview, CL comedy correspondent Michael Murillo asked Saget why he always comes back to stand-up.

"He gave a longer answer than what was published," Murillo wrote after Saget's death.

In the wake of the comedian's death, Murillo has shared Saget's full response. Read it below.


In addition to singing in a monster costume, you’ve acted, directed, hosted game shows, written books and served as the narrator’s voice on “How I Met Your Mother.” But you always seem to come back to stand-up. What does telling jokes on stage give you that other creative outlets can’t?

Bob Saget: I love that question. When I started singing comedy songs when I was seventeen, I was drawn to music and parodies and writing original songs too because I had seen Martin Mull do his show while I lived in Philadelphia. Amazing, I’ve been directing a documentary we are near completion of about Martin Mull.

So I always did musical comedy, but then took off the guitar and did stand-up since I was seventeen all the way through my entire life. I would go away from it for a few years here or there—After the Video Show ended, I directed a feature film (“Dirty Work” with Norm) and three movies for television— But then I always came back to stand-up to find my core of what I find funny, no matter where it led me.

I’m on tour because I love this new hour plus of material I’ve been working on so much, it’s literally like beginning again, but now I know all the tools to make it better than in the past. And comedy certainly has changed, and so have I as far as being more responsible. Still doesn’t mean I don’t go off on stuff that’s like a soft-R rated rant, but I’m really into just being funny and sharing it with the people, which, especially now, brings me a gigantic amount of satisfaction.

" It’s always happening in the moment. I love it now more than ever."

I’m at the Tampa Improv Comedy Theatre this weekend, and some people have asked, “Will it be the same stuff you did when you played in July at The Capitol Theatre in Clearwater?” And I’ve answered, “Well, I have a lot new stuff to talk about since then because every day is a brand new experience in this insane world we are in, but yes, some of it will be the same.”

When it comes to me doing my music, that’s different as comedy songs can be heard over and over if they’re any good. But my stand-up is never the same. It’s pretty much different every time I do it, because I always need to change it up ‘cause I can’t like do a recital and stay on book with my standup. It’s always happening in the moment. I love it now more than ever. With stand-up, no one can tell you what can or can’t say or do….except the audiences.