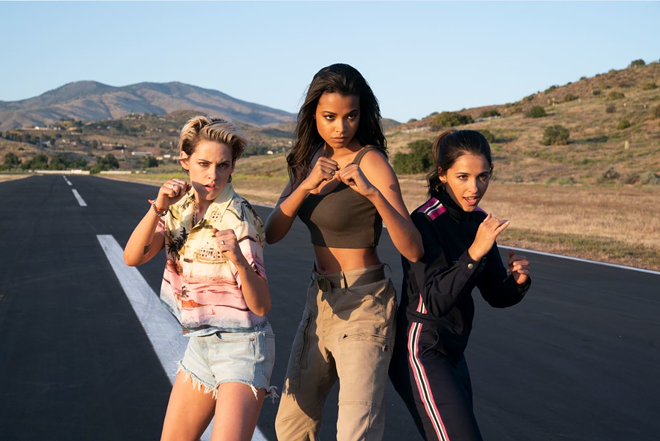 The idea of rebooting “Charlie’s Angels,” the iconic television show that ran from 1976-1981, for a new generation is not a bad one, on paper at least.

For one, it’s been 16 years since the last feature film arrived in theaters, and that outing, “Charlie’s Angels: Full Throttle,” which starred Drew Barrymore, Cameron Diaz and Lucy Liu, was almost instantly forgettable.

More importantly, in our current #MeToo, female empowerment climate, there’s a lot that could be accomplished by showcasing a trio of resourceful women who are intelligent, tough as nails and fiercely independent.

And, at least in its opening sequences, this new iteration of the Townsend Agency’s detective squad, seems supremely confident and capable of squelching the stereotypes that were so pervasive in the 1970s and early ‘80s.

As directed and written by co-star Elizabeth Banks, the film starts off with Sabina (Kristen Stewart) posing as a potential trophy wife for a wealthy Asian crime boss whose thoughts about a woman’s place and role come off as antiquated as intended.

Minutes later, Sabina is kicking his ass all over a high-rise balcony, and the mostly female screening audience was loving every punch.

By the end of that mission, which also introduces another “Angel” named Jane (Ella Balinska), who happens to be ex-MI6, the title credits roll with a series of images of young girls across the world doing anything and everything possible.

In Banks’ vision, the Townsend Agency is noticeably diverse with several smart improvements. For one, the character of Bosley, the capable handler and helper to the female detectives, is now a title, much like lieutenant, and there are literally dozens of Bosley’s around the world.

The next sequence, which introduces Elena (Naomi Scott), a brilliant scientist who is working on an alternative energy project in Germany, keeps kicking fresh life into the franchise by pitting her against an equally obnoxious male executive who puts his hands on her while dismissing her intelligence and threatening to fire her if she speaks out.

Banks’ message in these early moments is clear and applaud-worthy. Her angels don’t take crap from anyone, and they don’t apologize for their gender.

The problem with “Charlie’s Angels” becomes more noticeable once the main plot is established, and a big part of that problem is the plot itself, which involves a rogue Bosley operating within the agency who may be angling to get their hands on the energy source that Elena has helped construct in order to weaponize it.

Essentially, Banks tries to create a proto-feminist action caper in the vein of far more successful and savvy action franchises like “Mission: Impossible,” “John Wick,” and even “The Fast and the Furious”; the action sequences, however, lack a wow-factor, and the comedy elements are decidedly mixed with too many jokes missing their marks.

This has nothing to do with the film being fronted by three female protagonists.

Stewart, in particular, absolutely owns every frame in which she appears. The former “Twilight” star has never been this engaging or seemed so relaxed and carefree. Her presence alone saves “Charlie’s Angels” from being a zero-star bomb.

Scott and Balinska also register well, even if their backstories are less fully fleshed out.

Banks also does a lot with her little screen time as a former angel-turned-Bosley. But poor Patrick Stewart, as the original Bosley, seems lost and unsure exactly how to fit within the world that’s been created.

After 43 years of brand recognition and cultural relevance, I was hoping for a lot more.

While the end product is more ho-hum than hoorah, should box office receipts warrant a sequel, I would strongly recommend that the next outing featuring Sabina, Jane and Elena goes grittier with less glam and follows the “Atomic Blonde” model for showing how strong female action heroes can save the day with style without sacrificing their values or trying to appease male expectations.