Ollie up for All Decked Out at Polk Museum of Art

Skateboarding art and more celebrate the sport in Lakeland this summer.


Since its inception a decade ago, national Go Skateboarding Day, celebrated annually on June 21, has only grown in popularity. Last year, the occasion inspired the Smithsonian’s Lemelson Center for the Study of Invention and Innovation to host Innoskate 2013, a multi-day conference on Washington, D.C.’s National Mall that explored the art and technology behind skateboarding though performance demos, gear expos and public discussions about the history of the creative practice.

This summer, the city of Lakeland kicks off a local version of the event, Innoskate Lakeland, which will feature a similar lineup of attractions — from a skateboard obstacle course to panel discussions — at the newly constructed Lakeland SkatePark on Lake Bonny. The Polk Museum of Art, an affiliate of the Smithsonian, also anchors the celebration with an exhibition of skateboard inspired art, already on view, called All Decked Out!

The show is organized by two local skate mavens, Chad and Suzie Cardoza, who have been staging skateboarding-inspired art exhibitions in Tampa for about seven years under the moniker Kick Start My Art. Nearly 50 artworks make up the exhibition. Around half of them adopt the skate deck itself as a base for painting or inventive sculpture; the others take a variety of forms including drawing, photography and jewelry.

A bevy of artists who are current or recent Tampa Bay residents — P$ynner (pictured), Samantha Churchill, Shane Hoffman, Dan Lasata, Daniel Mrgan — share billing with artists from around the country including Marc Cody, who crafted a functional bass guitar out of a skate deck, and skate pros Lance Mountain and Jason Adams, who contributed boards to the show. 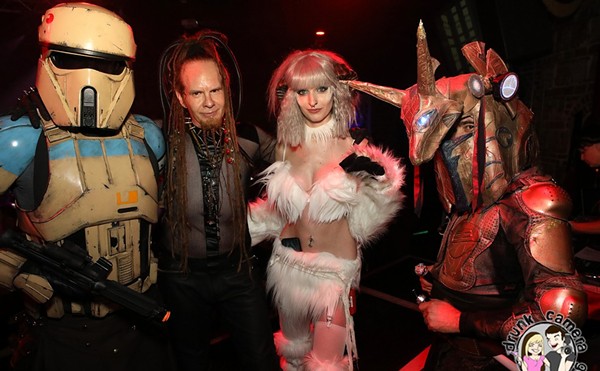