Being a gay female athlete

Confessions of an amateur athlete: Learning to stand tall.

I first came out of the closet when I was 16 years old. Hearing about how homosexuals were not just wrong and sinful, but also absolutely disgusting, I told myself I was “just bi” to ease the blow to my soon-to-be-expatriate conservative Catholic self. I kept my cards close to my chest, playing up my crushes on male celebrities and infatuations with some of the guys at our high school. Being 16 and sinful is one thing; being 16 and repulsive is another.

I was involved in team sports my whole life (thanks, Mom and Dad!) and learned a lot about teamwork and the value of dedication from an early age. I tried every sport from ballet to basketball, sailing classes to tennis, soccer and jazz and everything in between. One sport I fell in love with from day one, though, was swimming. It could be a pool, the beach or even the hot tub in a friend’s backyard — I always felt at home underwater.

It wasn’t until high school that the stereotypes about my physical appearance hit me, and they hit pretty hard. At 6 feet 2 inches tall I towered over my classmates — including most of the guys. This was embarrassing, especially for a teenager. Swim team was one of my favorite things about school — I lived for the hours of pushing through workouts in the water and was floored when a judge approached my mom at a district swim meet to tell her I had a good chance of swimming on a college team. Weekend swim meets and team practices grew to be something I dreaded, though, when a handsome upperclassman and Varsity swimmer began taunting me about how I looked. It started with my tallness; even though he was taller than me he couldn’t seem to deal with my height. Then he turned to making fun of me for my deep voice, my flat chest (I didn’t grow boobs until senior year) and more.

I’ll never forget his famous line: “You’ve got all the testosterone, just none of the equipment!” The worst part is I didn’t really “get” what he was making fun of at first. I would laugh along with him, thinking he was teasing me affectionately the way my brothers did. My loud laughter only gave him more material to work with, though, and eventually I figured it out. The joke was on me. The taunting grew worse with time and I didn’t know how to handle it. I began to stoop in order to not seem so ridiculously tall; I slouched the broad shoulders that made me a good swimmer so that they wouldn’t seem so massive. I attempted unsuccessfully to raise my voice a few octaves and eventually settled on just being quiet if he was around.

I tried my best to shrink.

Eventually when I came out of the closet, I spent a lot of time hating myself for fitting stereotypes about lesbians. I resisted activities with weights or strength training because I didn’t want to look any more “manly.” I refused to wear heels because they made me even taller and increased attention and stares; I grew my hair longer in attempt to decrease the amount of times I was addressed as “Sir.” I continued to shrink.

Regardless of how much I tried, though, I could never really blend in. Despite slipping to the edge of the room and wearing flats instead of heels, I stuck out like a sore thumb nearly everywhere I went. Still do.

I’m gay and I’m tall and I like to play sports. I have a deep voice and a loud laugh. My boobs finally came in, but so did some muscles. No matter how much time I have spent un-wishing it, I was born to stand out. And nothing I do to shrink myself will ever change that.

So here I am. I joined a crossfit gym and despite friends’ comments about “too much strength training” making women look “masculine” (what does this even mean?!), I am absolutely loving watching my confidence grow along with my muscles. The things which make me feel the most feminine and beautiful — having short hair, playing sports, dressing differently — are, ironically, things much of society says are unfeminine. And I’m OK with that.

There are still a lot of people out there just like the guy back in high school. But I am no longer the girl who puts up with it. If someone is intimidated by my height or doesn’t like the way my voice sounds, I no longer allow it to be my problem.

I am learning to let go. And if like me, you struggle with gathering the confidence to stand up straight or strap on those heels or join a gym that might make you look different from how other people think you should look, know you’re not alone. It takes work to embrace our own differences, but we can do it together. 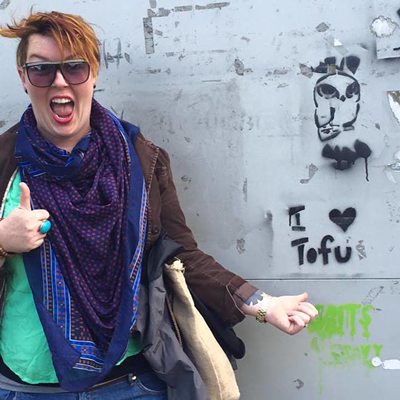 %{[ data-embed-type="image" data-embed-id="5bccb9c0b38df12e008b45d6" data-embed-element="span" data-embed-size="640w" contenteditable="false" ]}%Resie Waechter is a recent USFSP graduate who majored in English literature and cultural studies with a minor in history. She is a fumbling fitness junkie with a special...
Read More about Resie Waechter
Scroll to read more Sports & Recreation articles