‘Spider-Man: No Way Home’ delights by casting a wide web across multiple universes

Longtime fans of Marvel Comics’ most iconic hero should prepare to be thrilled. 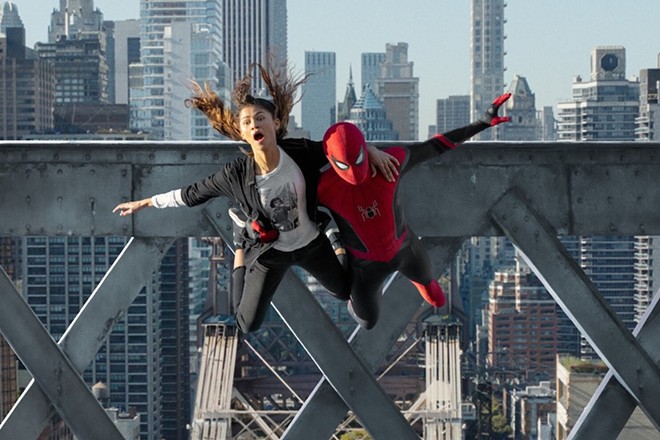 Matt Kennedy
MJ (Zendaya) and Spider-Man jump off a bridge in Columbia Pictures’ 'Spider-Man- No Way Home.'
I can’t even begin to imagine the difficulty that must come with trying to follow the epic conclusion to Marvel Studios first three phases.

“Avengers: Infinity War” and “Avengers: Endgame” were near perfect examples of how to deftly manage dozens of characters and individual character arcs that had been meticulously plotted over the studio’s first 11 years.

Rebooting the Marvel Cinematic Universe (“MCU”) for its fourth phase would have proved daunting, notwithstanding the arrival of a global pandemic, and the handful of new feature films and serialized television events since “Endgame” have delivered decidedly mixed results.


Spider-Man: No Way Home
4 out of 5 stars
Now playing

On the small screen, Marvel’s Disney+ properties like “WandaVision,” “Loki” and “The Falcon and the Winter Soldier” have been thrilling extensions of characters beloved within the MCU. But of the three feature films released in 2020 and 2021, only “Shang-Chi and the Legend of the Ten Rings” truly lived up to the high bar set by the studio’s creative brain trust. “Black Widow” was good, but not awe-inspiring and “Eternals” was too massive for its own good, despite laying groundwork that should bear delicious fruit in the coming years.

So far, it would appear that the MCU is blazing a two-fold path with its Phase 4 endeavors, exploring both the vast cosmos and the mysterious multiverse, to bring some of Marvel’s most fan-favorite comics storylines to live-action light.

Thankfully, I can report that Holland and returning director Jon Watts deliver the goods, and then some.

“No Way Home” is a resounding success and proves to be an epic merging of multiple storylines from the character’s various iterations. I can’t say much more because, honestly, there are so many surprises, so many delights, so many whoop-out-loud moments that fans will likely immediately go and buy a ticket for the next available showing just to soak it all in.

“No Way Home” opens immediately following the ending of 2019’s “Spider-Man: Far from Home” with Peter Parker’s identity revealed by Mysterio with his dying breath. J. Jonah Jameson (J.K. Simmons) has morphed from editor of The Daily Bugle into a frothing, conspiracy-laden caricature of Alex Jones whose sole intent is to destroy Parker’s reputation and paint him as a murderer.

The fallout threatens everyone that Parker loves, including his Aunt May (Marisa Tomei), girlfriend MJ (Zendaya) and best pal Ned (Jacob Batalon). In an effort to salvage life as they knew it, Parker goes to Dr. Strange (Benedict Cumberbatch) to cast a spell that reverts time and essentially erases any knowledge that Parker is Spider-Man. Things, as they say, go fuck-all bad in a hurry.

The resulting calamity however gives Watts and his trilogy scribes, Chris McKenna and Erik Sommers, license to uncork a thrilling Pandora’s Box of Easter eggs, what-if scenarios and fan-fiction vision board moments, and they do not hold back.

Trailers have already let slip with several surprises, namely the return of Dr. Otto Octavius (Alfred Molina), Electro (Jamie Foxx) and Green Goblin (Willem Dafoe), and the Internet has been abuzz with rumors of other appearances from different timelines, but don’t think you know what to expect because you don’t. Thankfully, some very, very, very good WTF moments still await.

For me, one of the most satisfying takeaways from “No Way Home” is how the MCU treats the earlier iterations of Spider-Man, which it had little to no creative control over, showcasing Sam Raimi’s contributions from 2002-2007 and even making you rethink that still-simmering hatred for Marc Webb’s much-maligned reinterpretations in 2012 and 2014.

And “No Way Home” continues to bring the humor that it established in both “Homecoming” and “Far from Home,” delivering some epic, meme-worthy quotes. One of the best was sanitized for the trailer, but lands much better with profanity intact. And the rest, well, let’s just say once again you’re going to want to buy another ticket immediately because of what you may miss while laughing, but here’s a personal favorite that’s still spoiler-free: “Are you going into battle dressed as a cool youth pastor, or did you bring your suit?”