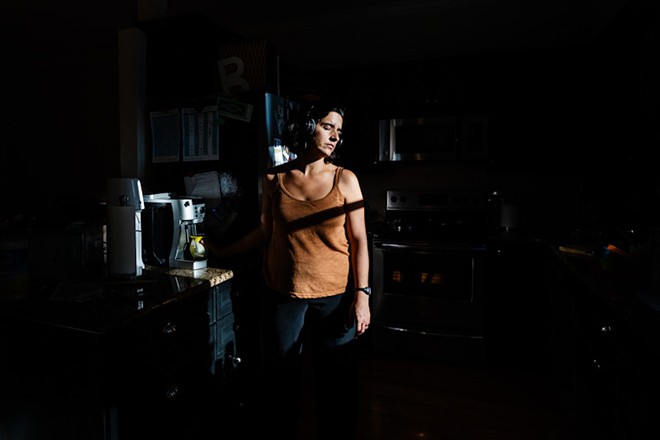 Photo by Águeda Sanfiz
Tampa-based family documentary photographer Águeda Sanfiz has always ascribes to the idea that when it comes to family life, one should document everything, not just the good moments.
If you’re looking to explore photography in 2023, head to the Morean Arts Center this spring. It’s ringing in the New Year with three new photography shows—Águeda Sanfiz’s “The Other Pandemic,” Tom Kramer’s “Forever Changed” and “Wonder in the Wild” featuring photographic works by Curtis Anderson, Jr. and Stefan Jennings Batista—which highlight work of three Tampa Bay area photographers (Batista is based in based in Albuquerque).

An opening for all three photography shows happens at St. Petersburg's Morean Arts Center on Saturday, Jan. 14 from 5 p.m.-8 p.m.

In addition to sharing the medium of photography, the three shows have something else in common. They each address either mental health issues and/or the lack of connection many of us experienced during the COVID-19 pandemic.

So many of us snap shots of life’s happy moments with our cell phones to share on Instagram. But what do we do when times get tough? The real photographers just keep on shooting. They know that the true art of photography lies in being able to take a difficult or sad subject and create beauty from it.

Tampa-based family documentary photographer Sanfiz has always ascribes to the idea that when it comes to family life, one should document everything, not just the good moments. In early 2020, Sanfiz’s sister, Ana Sanfiz Sancho, took her life at 44 years old in Tarragona, Spain. It happened 11 days after the Spanish government announced a nationwide lockdown to fight the Covid-19 pandemic. Sanfiz kept shooting. Photography became a way for her to process the loss and trauma she and her family experienced in 2020.

“Documenting and telling my story, despite being uncomfortable and intimidating, is also cathartic,” Sanfiz said in a press release. “It helps me connect with countless people who had similar experiences during the pandemic. [It’s] a way to remind people, ‘You felt alone, but you were not alone.’”

On Thursday, Jan. 19, Sanfiz and Morean’s Chief Curator, Amanda Cooper will discuss the use of lens-based arts as tools to cope with traumatic experiences. Jazz musician Ona Kirei will close the event with a brief concert.

Late photographer Tom Kramer documented these feelings of pain and loneliness in his final collection of photographs, “Forever Changed.”

Kramer, known for his masterful dance photography, passed away in late 2022 at the age of 87. He shot “Forever Changed” at St. Pete’s Palladium Theater during a time when the art community was hit particularly hard by the COVID pandemic.

Unlike Kramer’s past work, photos in his “Forever Changed” series have an “austerity and a kind of sadness to them,” Cooper, told Creative Loafing Tampa Bay. They’re mostly in black and white, and there’s an implied nudity to them. Their stripped-down nature expresses the vulnerability many of us felt during the pandemic. In many cases, “the bodies are contorted as though they could be in pain,” says Cooper, who sees both pain and joy in the photos.

“The pain of being apart, and then the joy of coming back together,” Cooper added.

Together, these three shows demonstrate the power of photography to help one process pain and trauma. But they also illustrate the human experience.
“Really, I think it’s about journeys and how we as humans show resilience,” says Cooper.
In addition to hosting three photo shows this spring, the Morean offers workshops and classes in iPhone photography, digital photography, Photoshop, portraiture, and the business of photography starting Jan. 10 (Winter Session 1) and Feb. 28 (Winter Session 2).