Be prepared to fall in love with a spork, two plush carnival prizes and Keanu Reeves’ Duke Caboom.

Walt Disney Studios
Woody (Tom Hanks, left) tries to teach Forky (Tony Hale) about the value of friendship while educating him on the purpose of toys.

I put my toys through hell when I was a kid.

He-Man would get trounced by Godzilla. Mego Corp.'s Batman would get eaten by Kenner’s terrifying 18-inch Alien. Stretch Armstrong would be strapped to a gurney for an impromptu autopsy to see exactly what was inside that made him so flexible. And poor Jill (Hasbro’s Farrah Fawcett-Majors doll from Charlie’s Angels) would be caught and held hostage by a rogue’s gallery of Marvel villains.

Maybe that’s why, for me, Pixar’s Toy Story movies have always resonated. I was one of those kids who actually believed his toys could literally come to life.

What’s really amazing, though, is that 24 years after our first introduction to Woody (Tom Hanks), Buzz (Tim Allen) and the rest of young Andy’s stocked toy chest, these films can still capture my aging heart and bring a smile — and a tear to my eye.

Think about that — for almost a quarter-century, Toy Story has ignited our nostalgia and given life to our childhood imagination. And yet, somehow, each new film has improved in quality, culminating with this week’s release of Toy Story 4, which may just be the best film in this enduring franchise.

Toy Story 4 showcases the most photorealistic animation ever produced by Pixar. In the opening flashback, which finally answers the question of why Bo Peep (Annie Potts) was absent from 2010’s Toy Story 3, there’s a thrilling rescue attempt that features a remote-control car being whisked away toward a storm drain during a deluge. The leaves, the branches, the rushing water all look ridiculously real.

A lot has changed in the nine years since we last visited this gang. The toys all belong to a new kid, Bonnie, who’s about to enter kindergarten. Woody is still the sheriff, but he’s no longer in the head-toy-in-charge, and that existential crisis — what is a toy’s purpose if not to delight a child — sets in motion a wonderfully poignant adventure.

It also introduces Forky (Tony Hale), the first of oh so many new, and instantly iconic, toy characters debuting in this universe.

Bonnie makes Forky (a plastic spork with googly eyes, popsicle stick feet and red pipe cleaner arms) during a craft project in class, and he instantly comes to life, albeit a wholly conflicted one, since he longs for the warm comfort of the trash, which he believes is his ultimate destination once his use as a utensil is complete.

Forky is a jittery, neurotic delight, and a perfect foil to Woody, who is determined to keep him from escaping Bonnie for the nearest garbage receptacle at all costs during an end-of-summer vacation trip to a family tourist destination. 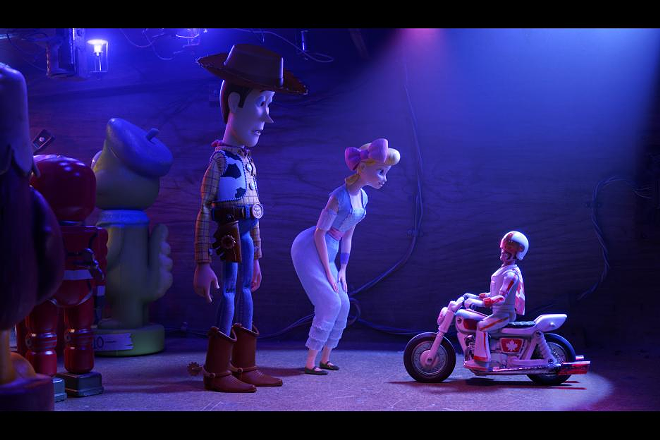 It’s there that Woody is reunited with Bo Peep after Forky is captured at an antique store by an aging doll, Gabby Gabby (Christina Hendricks), whose voice box no longer works.

Bo Peep is now a “lost toy,” meaning she no longer has a kid to call her own, and she’s completely happy with that freedom, but she can’t resist her rekindled, long-simmering attraction to Woody, which is why she agrees to help him retrieve Forky before Bonnie realizes he is gone.

Toy Story 4 plays out along parallel tracks that eventually converge.

While Woody and Bo Peep meet the discarded toys left on shelves at the store, and make friends with Duke Caboom (Keanu Reeves), Canada’s greatest stuntman — a nod to the classic 1973 Ideal Toys Evel Knievel Stunt Cycle — Buzz is scouring the grounds of an adjacent traveling carnival for Woody, which is how he meets the stuffed Ducky (Keegan-Michael Key) and Bunny (Jordan Peele), who are freaking hysterical.

The rapid-fire humor on display matches the duality of the story, which is Pixar’s staple.

The jokes designed for kids — such as nervous Rex (Wallace Shawn) exclaiming, “The panic is attacking me!” — will also resonate with adults. And the more grown-up zingers — such as when inch-tall Giggle McDimples (Ally Maki) tells Bo Peep, “Cowboy’s got it bad. Trust me, I know about this. Remember me and He-Man? I’m not proud” — land with pitch-perfect parental precision.

But it’s the depth of the story here that captures your heart. Who among us hasn’t questioned their reason for existing? Who here has never wondered if there’s more to life than just fulfilling a role?

Personally, I’m just thankful to be old enough in years, and young enough at heart, to fully appreciate the remarkable accomplishment that Toy Story 4 represents.

Just two months after Marvel Studios wrapped up an epic, 11-years-in-the-making storyline of good and evil, Pixar sticks its own landing, opening a new door for some beloved characters and saying goodbye to others.

This is how life is, and it should be celebrated rather than feared.

While that message will likely be lost on the youngest viewers, hopefully in 2043, when Toy Story reaches its mid-century mark, those toddlers of today will be grown and sitting in a theater with kids of their own, watching the latest Pixar release, and they can smile and shed a tear at the beauty of it all.