Tanks for the memories: A brief history of captive marine mammals in Tampa Bay

Snooty had a relatively good life up until the end. Those who came before him? Not so lucky.

Passed in 1972, the Marine Mammal Protection Act makes it illegal to take dolphins, whales, manatees and other creatures from the wild. Exceptions are made for injured or sick animals who will likely benefit from rehabilitation and — hopefully — release. For one reason or another, release isn’t always an option.

That’s why Winter, the bottlenose dolphin fitted with an artificial tail, will live out her life at the Clearwater Marine Aquarium. Winter’s predecessor was Sunset Sam, who stranded himself, emaciated and dying, in 1984. Restored to health, Sunset Sam remained at the Clearwater facility, utilized in dolphin behavior research studies and embraced by the community, until his 2001 death.

Hugh and Buffett, the 20-year-old manatees that live at Mote Marine in Sarasota, were born in captivity and so were grandfathered in.

Like them, Snooty never knew life in the wild; known as cute little “Baby Snoots” when the Miami Seaquarium shipped him to Bradenton in 1948, Snooty — a “sea cow,” to use the vernacular of the day — lived in an entirely artificial environment. Until the early ‘80s, his habitat at the South Florida Museum was just over three feet deep, the water never heated nor cooled.

All that changed, of course, and his drowning death — two days after his 69th birthday — was apparently a tragic accident. From all accounts, Snooty was well taken care of.

Science, research and public education are the watchwords today — and the job requires care, commitment and a boatload of licenses and permits. The post-World War II period, when the bay area’s population exploded, was a less-enlightened time  … Collection of the author
The Aquatarium, on St. Petersburg Beach, claimed "the world's largest circular marine tank," 100 feet in diameter, 24 feet deep and containing 1.2 million gallons of seawater, pumped in from the adjacent Gulf.

From the 8th Avenue pier on the east side of Pass-a-Grille, Wilson Hubbard ran charter fishing expeditions and “party boats” up and down the barrier islands. In the early 1950s, he and Frank Buswell, one of his boat captains, captured three bottlenose dolphins using a steel-and-rope noose system that Buswell had developed.

On remote Shell Key, Hubbard had constructed a pier for his tour boat. To this he attached a 200-foot half-circle of chain link fencing, bolted to pilings sunk deep into the sand. The dolphins were dropped inside the fencing, and — trapped —became Pinellas County’s first “porpoise show.”

Every day, once an hour on the hour, the Shell Island boat would arrive and Hubbard would throw fish to “Mike” and “Patty” (named for his young children) and “Frank” (named for the man who’d engineered their capture).

“He actually trained them to jump out of the water,” Michael Hubbard remembers. “Not like you see in the shows, but they’d jump up to get the fish.”

In 1953, however, Frank and Mike escaped, leaving Patty by herself. Hubbard, by this time, had grown tired of the porpoise shows and decided to sell his remaining stock. The buyer was Jack Hurlbut, who ran a bait shop on John’s Pass. He kept fresh salt water circulating in several large tanks outside his front door, so he could display live fish for the gawking tourists who walked by.

Inside the walls of a small house across the street, he constructed a 21 x 34 foot concrete tank, with circulation and filtration systems, and filled it with salt water. In went Patty.

The water depth was 8 feet; the animal measured 7 feet 10 inches from nose to fluke.

“He had somebody come out and look at it, and they told him it wasn’t a female, it was a male,” Mike Hubbard says. “Nobody knew how to check that. Anyway, that’s when Patty became Paddy.”

FROM THE COLLECTION OF WAYNE AYERS; USED WITH PERMISSION
"Paddy the Porpoise" doing his thing with Jack Hurlbut (late 1950s/early '60s).
Paddy spent 12 years in that dark, dank tank at Hurtbut’s Marine Arena, ringing bells, “shaking hands,” bouncing a beach ball and jumping through a hoop. Three shows a day, 75 cents for adults and 35 cents for children. A closed-in roof kept out bad weather — and kept Paddy from feeling the sun.
click to enlarge

From the collection of Wayne Ayers; used with permission
Marine Arena
click to enlarge

Bill DeYoung
This building in John's Pass Village was the site of the Marine Arena/John's Pass Aquarium. It's now Wild Style Swimwear.
click to enlarge Bill DeYoung
Wild Style Beachwear, interior. The roof and tank walls of the old dolphin pen are still intact. In fact, when you're inside the shop, you're inside the actual tank where Paddy spent 13 years in virtual isolation.

In 1964, a California conglomerate leased 15 acres on St. Petersburg Beach for the Aquatarium (aka “Kingdom of the Sea”), a $2 million, state-of-the-art “marine park” meant to cash in on the success of places like Marineland (near St. Augustine) and the Miami Seaquarium. Porpoises — er, dolphins — were becoming big business. Flipper, on NBC, was one of the hottest kids’ shows of the era.

Hurlbut sold Paddy, “Sydney the Sea Lion” and 50 fish to the Aquatarium in 1966. His attraction — by then it’d been re-named the John’s Pass Aquarium — was shuttered.

With a “training tank” under a towering, gold geodesic dome, and a 1-million gallon “performance tank,” the Aquatarium featured the usual performing-dolphin stuff: hoops, balls, horns and a lot of fish-tossing. Then there was Jonah, a 1,900-pound short-finned pilot whale the owners had shipped in from the west coast.

In the summer of 1966, Jonah — a deep-water species not used to relatively shallow water — suddenly stopped eating and inexplicably died. He was not replaced. 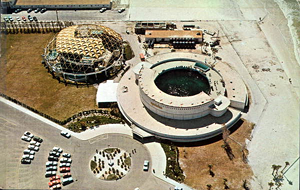 Like so many of the roadside attractions of the 1950s and ‘60s, the Aquatarium itself all but died upon the arrival of the Eisenhower Interstate System and, ultimately, Walt Disney World in 1971. It limped along for a few years, changing the name to Shark World (“World’s Largest Shark Exhibit!!!”) in the frenzied wake of the movie Jaws  but passed into history in ’77.

The tanks and facilities were razed, and were replaced by the Silver Sands condominium complex.

There were others, of course — many people have fond memories of Seminole’s Porpoise Pub in the Flipper period, with a live bottlenose dolphin swimming out back in a tiny pool.

These days, animal rights activists argue that no creatures — and marine mammals are indisputably the most intelligent and sensitive – should be kept in captivity. Snooty, God rest his soul, might take exception. He had a good life.

It’s a safe bet, however, that Paddy … and Jonah … and the evicted residents of the Aquatarium — would passionately agree.

"Let’s face it — porpoises are friendly fellows, and great fun on a channel swim … but for the most part, they’re an undisciplined lot, lacking in purpose, lost in play. Most porpoises, that is, but not Paddy, the 8-year-old star of Jack Hurlbut’s Marine Arena on the Holiday Isles. Paddy performs his series of crowd-pleasing tricks three times a day, earning fish and fame for himself, and considerable business for his boss."

Bill DeYoung was born in St. Pete and spent the first 22 years of his life here. After a long time as an arts and entertainment journalist at newspapers around Florida (plus one in Savannah, Ga.) he returned to his hometown in 2014.You’ll find his liner notes in more than 100 CDs by a wide range of artists including...
More
Scroll to read more Local Arts articles
Join the Creative Loafing Tampa Bay Press Club