The heart of the matter: Congo/Women at Poynter Institute

A new show at Poynter focuses on the horrfic plight of women in The Democratic Republic of Congo. 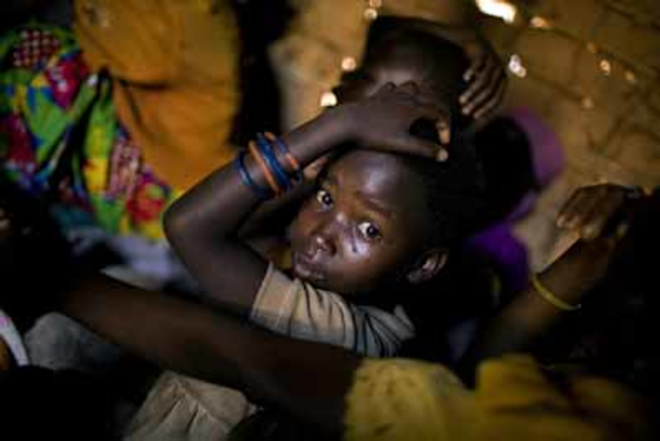 Ron Haviv/vii
Ron Haviv/VII, Gina, 2005: A young girl and her family mourn the death of an 11-month-old child who died from disease. More than 5.4 million people have died in the Congolese conflict since 1998, the majority of people from disease and hunger.

Given the headlines and images that emerged from Haiti last week, Americans may be in a particularly humanitarian frame of mind at the moment. By coincidence, however, an exhibition of photographs from Congo on view in St. Petersburg serves as a reminder that while our awareness of such crises fluctuates as a function of media attention, horrific living conditions constitute a grim status quo in many regions of the world. The Democratic Republic of Congo — a nation of some 68 million people in central Africa — is one such place. Thrown into chaos by military conflict from 1998 to 2003, the DRC remains a place where social injustices persist in daily life, though rarely as "newsworthy" events.

Congo/Women, installed at the Poynter Institute as part of a larger, yearlong program of Africa-themed events organized by Eckerd College, focuses specifically on the plight of women in the DRC. Photographs by noted "conflict photographers" (shooters who specialize in investigating war-torn locations) Lynsey Addario, Marcus Bleasdale, James Nachtwey and Ron Haviv — who will speak at the Poynter on Jan. 27 — temporarily transport viewers into a world characterized, for the women who inhabit it, by rape, disease, unplanned pregnancy and malnutrition. As if the tragedy of their subjects weren't enough, the beauty of the oft-evocative photographs provides a further shock to viewers' systems.

On Jan. 20, curator Leslie Thomas speaks on a panel at the Poynter about the role of artists in social justice. Last week, she took time to answer some questions about the exhibit.

Creative Loafing: Was there a specific moment that inspired this exhibition — a meeting or a conversation, a headline?

Leslie Thomas: I first heard about the ongoing atrocities in the Democratic Republic of Congo when I saw the photographs taken by Marcus Bleasdale during his many years in the DRC. I was simply shocked by the level of violence that women and girls were enduring and felt that it was essential that we get involved.

What was it like to select the images for the show?

On the one hand, it's such an honor to get to know the women and girls of the DRC and their families through the incredible visual images taken by the photographers in the exhibition. On the other, it was emotionally very hard to spend months going through literally thousands of photographs — each one telling about an incident that should have never happened. But there is so much joy for life and strength and bravery in the face of this crisis that you come away with huge admiration and respect and hope that these women will continue to lead their way to peace and stability for themselves and their country.

Certainly there are many incredible stories represented in the exhibition. Was it difficult to decide to leave other pictures, presumably equally captivating and tragic, out of the show?

Yes, absolutely. Each story describes a life, and there were many images that are so powerful, but [there's] only so much room in an exhibit. There is also a need to reflect a range of experiences — so we tried to make sure the entire cultural, political, educational and economic story was being told, which meant that some things had to be left out, which is hard. Additionally, some prints do not work on fabric and some don't work at the very large scale we were using for the portraits — so the technological parameters added an additional curatorial filter. We talked about this as a team and understood that certain choices would drive the overall selection and had to edit to a place where each need was met.

I was particularly struck by the photograph of a woman's swollen feet — a woman who suffers from encephalitis and was raped when she was not able to run from her attackers. I found this image to be quite fascinating and beautiful; then I read the label, which broke my heart. What's the significance for you, as a curator and a viewer, of this incongruity?

This is the heart of the matter. These are beautiful women, beautiful people, living in a beautiful country where some absolutely horrific atrocities have happened. Are happening. It's essential that we come closer and lean in — that we get sad and then angry and then act so this stops happening.

Visitors may be surprised to see the form the exhibition takes: a portable installation of images printed on high-tech fabric rather than matted and framed. Does this have to do with the kinds of venues where the exhibit has been shown?

Yes. The design had to be appropriate for museums and church basements, student unions and pristine galleries: bold and strong and easy to install. I've always also found that big can be powerful — not always — but when you want to grab people's attention on a hard topic it can be a way to connect immediately.

Do you envy the photographers?

Envy? No. But I admire and respect them enormously. These are people who fly into war, who walk into fire and who make it possible for the rest of us to get a chance to help others, because photojournalists have shown us what the problems are.

I know that following the earthquake in Haiti, you've been involved in some online initiatives — using Twitter, Facebook — to raise awareness of the crisis there. Is it easier to make conditions in places like Haiti or Congo visible in the context of the culture of constant television, Internet, etc., or more difficult given the demands on everyone's attention?

We have, and it's a conscious decision to try to provide as many people as possible with options on how to help in this devastating crisis. But because of the multiplicity of options it's both easier and harder. There are so many media outlets and so much visual information that we have to work harder to get human rights past the clutter of Celebrity Bowling or Dancing with the Stars — but then again that same number of outlets means we have more chances. Jane Saks, the project co-director, often points out that we all curate our world — and I think she's really correct — so you have to provide people with visuals that are so strong that they make the edit for a lot of people.