The name of Tampa International Airport's big flamingo is Phoebe

The 21-foot tall flamingo is a sculpture by artist Matthew Mazzotta, who titled the piece 'Home.' 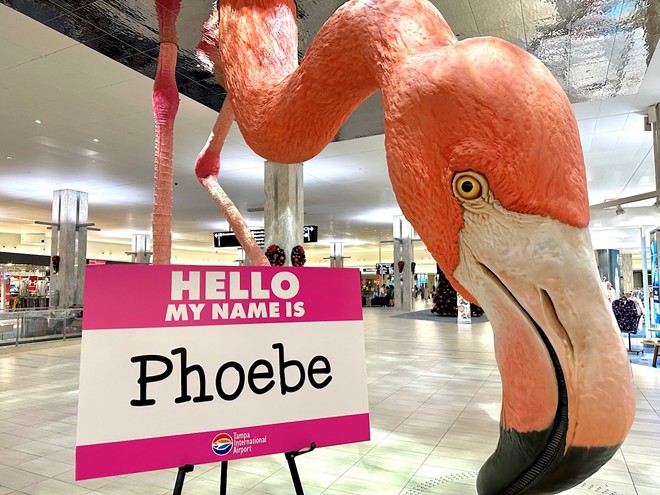 The airport announced the news Thursday morning, after the results of a naming contest where judges whittled more than 65,000 entries to three finalists before more than 37,000 votes were cast to land at the winner.

The name was initially submitted by a 63-year-old, Daytona Beach Shores-based retired educator named J. Bryan M, according to the airport. Bryan went to elementary school down the street from Busch Gardens and chose "Phoebe," in part, because it is a "playful alliterative to flamingo and means brilliantly inquisitive." Phoenicopterus is also a flamingo's scientific name.

The other two names that made it to the final round were Cora and Finn. The airport said that "Phoebe received 16,122 votes with Cora coming in a close second at 14,341 votes. Finn finished in third place with 6,779 votes."

Tampa International's 21-foot tall flamingo is a sculpture by artist Matthew Mazzotta, who titled the piece "Home," and alluded to the debate over whether or not the birds are even native to Florida.

"However, the story of HOME is not about whether someone or something, is originally from here or not," Mazzotta wrote. "The exaggerated scale of the flamingos in HOME puts the lives of these birds in the focus, and puts us, as humans, in awe as they tower above us, reminding us that we all share the same home."