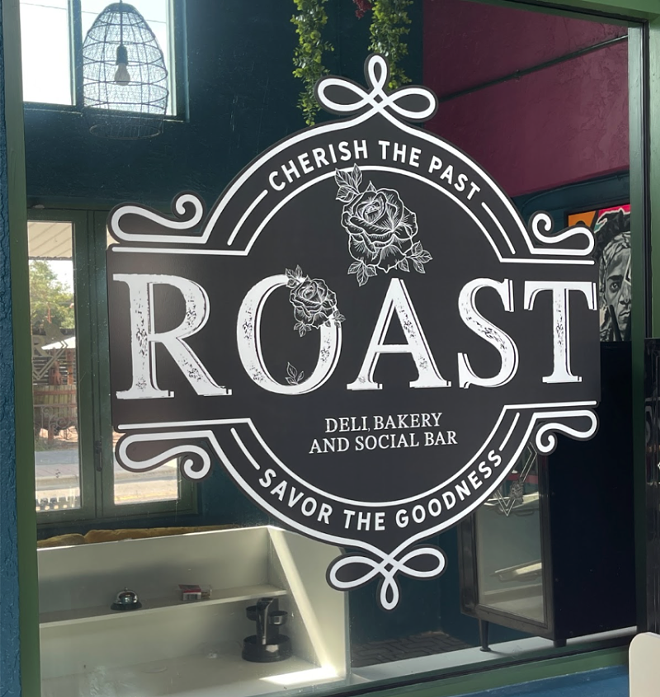 Photo by Alexandria Jones
Roast in Ybor City, Florida.
It’s been two months since the closing of the iconic Ybor City deli Sunday’s. At the time, the space’s future was unknown, but now we have an answer.

The parlor speakeasy is named after a former slave who owned over 30 acres that are now part of downtown Tampa. The Fortune Taylor Bridge crossing over Hillsborough River and Fortune Street downtown are named after her.

“I knew immediately I wanted it to be a sense of surprise and culture,” 7th&Grove co-owner and Creative Director Dr. Jamaris Glenn told Creative Loafing Tampa Bay. “That’s with everything we do as a business moving forward.”

Glenn says talks of taking over the space after Sunday’s Deli began in August. When he and 7th + Grove co-owner Khalilah McDuffie were thinking about their next concept, they initially considered going the fine dining route, but landed on a plan that would keep the integrity of the space. Glenn said they’ve always admired the building and its history.

“We want to keep the integrity of what a deli and bakery is like a homage to Ybor City,” Glenn says.

“We want people to have great deli items while also referring to the rich culture Tampa has. It’s like a great history lesson,” he said.

Glenn tells CL both concepts will open some time between the end of this month and mid-December. A grand opening event featuring Ms. Gloria Royster—famous for guiding the Madame Fortune Taylor Walking Tour—is in the works.

"The ultimate goal is to experience a culture that’s been invisible. We want people to understand Black culture is in everything.”

“I was so in awe the first time I sat down with Ms. Royster. I knew I wanted to do something with the ‘Madame Fortune Taylor’ name,” Glenn said.

7th + Grove’s Roast deli-bakery and Madame Fortune Taylor’s’ speakeasy—both at 1930 E 7th Ave. Ste. C in Ybor City—have a smaller capacity than their forefather 7th & Grove, with around 10 seats inside for Roast and up to 60 seats inside for Madame Fortune Taylor’s also. Outside seating is available, and guests are welcome to sit outside 7th & Grove, too.

At this moment, specific operating days are to be determined, but according to Glenn, Roast’s hours are slated to be 9 a.m.-4 p.m. and 5 p.m.-1 a.m. (with reservations) for Madame Fortune Taylor’s.

To Glenn, opening Roast and Madame Fortune Taylor’s Dessert and HiFi Parlor feels like an organic trajectory as an entrepreneur. He said to have something next door is a breath of fresh air and can hopefully bring people down to that side of Ybor City.

“We’re footed and rooted in Ybor City. The ultimate goal is to experience a culture that’s been invisible,” said Glenn. “We want people to understand Black culture is in everything.”